There were three graded stakes races on the undercard of Saturday's Travers at Saratoga. Immediately before the main event, a field of eleven 3-year-olds went in the $250,000 King's Bishop Stakes (G1), a 7 furlong sprint on the main track. Hard Spun was sent off as the 6-5 favorite, coming off a runner-up finish in the Haskell, looking for his first win since the Lane's End in March.

Hard Spun battled with 17-1 Spin Master down the backstretch through fractions of 21.94 and 44.20 while being stalked by 6-1 First Defence. Entering the stretch, Spin Master gave way as First Defence closed the gap along the outside and taking over the lead briefly inside the 3/16 pole. However, inside the 1/8 pole Hard Spun pulled away from First Defence to win by 1 1/2 lengths in 1:22.34. It was another 4 1/2 lengths back to late-running 9-1 E Z Warrior in third. 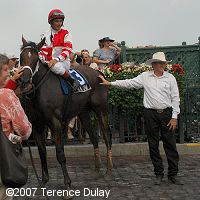 Hard Spun in the winner's circle with trainer Larry Jones on the right. Jones said, "He hadn't won a Grade 1 yet, so this is very good. It's very important for his stallion career to have the Grade 1 under him. This is a very important race for making stallions, and that was one reason we looked at it. He has shown up at every dance and run well. He's handled whatever we've thrown at him. He keeps his undefeated record going around one turn. This race came up very tough. I was worried about the pace, but he was keeping up with it very easy. I've seen him run these fractions before, when he was a younger horse and not nearly as strong as he is now, so I felt pretty good about that. He was bound and determined. He was game. He's just as game as he is fast. We're still looking for the Breeders' Cup Classic. We decided to go into it gaining distance. We know he can get 1 1/4. We'll look for a mile or 1 1/8 between now and the Classic." 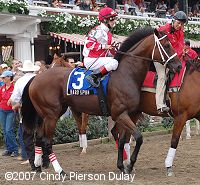 Hard Spun looks tough in the post parade. His jockey Mario Pino said, "He got to loafing when he made the lead, and I started to worry. As soon as he felt First Defence next to him, he switched leads and his class came out. That horse made a quick run at him, and it took him a little bit to get going turning for home, but once he leveled off, he went to the wire with his ears up. It's 95 degrees and he didn't even take a deep breath. He wasn't laboring, he was just looking for competition." 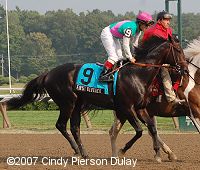 Second place finisher First Defence in the post parade. His trainer Bobby Frankel said, "He did great. He ran hard and he actually got a head in front. But experience got us beat today. He put in a good performance and I was happy with him."

His jockey Javier Castellano said, "He ran a great race, I'm really happy for him. He was just second-best today. The winner was much the best today. He never came back to me. (Hard Spun) is a classy horse." 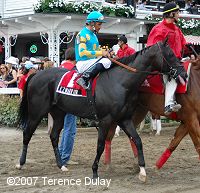 Third place finisher E Z Warrior heads out for the post parade. His trainer Bob Baffert said, "He actually broke well. They just out-ran him there early and he was just a little short. David (Flores) says he wants to run farther. I liked the way he ran. He has a new dimension: as a two-year-old, he was quick, and now, at the end today, he was the only one running. So, I can stretch him out and go further. I was happy with his race. The winner is a very good horse, but I like the way our horse ran."

His jockey David Flores said, "I wanted to go to the lead, but he's not as quick as these. This horse can come off the pace. I think he'll stretch out. I think he wants more ground." 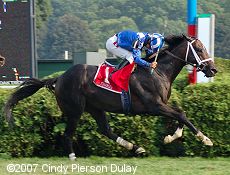 The first stakes race on the afternoon was the $200,000 Bernard Baruch Handicap (G2) for older horses going 1 1/8 miles on the Mellon turf course. Arlington Handicap winner Cosmonaut was sent off as the 8-5 favorite over 5-1 second choice Shakis, a distant fifth in the Bowling Green at Belmont last time out.

8-1 Ballast was allowed an uncontested lead first time past the stands and around the clubhouse turn through fractions of 23.10, 47.10, and 1:10.11, while Cosmonaut stalked him in second. Ballast continued to lead the field entering the stretch, but Shakis, who sat back in sixth early taking a ground-saving path on the hedge the whole way, found an opening inside and charged towards the front. Inside the 1/8 pole, Shakis took over the lead, pulling away to win by 3/4 length over late-running 22-1 Big Prairie in a new course record time of 1:45.33 over the firm course. It was just a head back to 9-1 Drum Major in third. Ballast faded to fourth while Cosmonaut lacked any late rally and was fifth.
Results chart 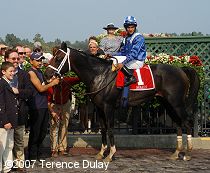 Shakis in the winner's circle. His trainer Kiaran McLaughlin said, "They went faster than I thought they would. There was a lot of pace. I don't think the pace was as big a deal as the trip. He's a real professional seven-year-old. He has done everything right in the past. I was happy he was willing, and he had plenty to get through the inside. I just didn't think he would get 11 furlongs last time (in the Bowling Green). We'll keep him at 8 or 9 furlongs."

His jockey Alan Garcia said, "It was one of the biggest wins of my career. I wanted to put him in the best position I could. I was not intimidated by being behind horses. In the early part, I expected some horses to go that didn't." 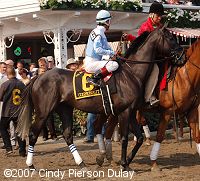 Fifth place finisher and beaten favorite Cosmonaut in the post parade. His trainer Patrick Biancone said, "I thought he went well, but he was giving the winner six pounds. I think that made the difference." 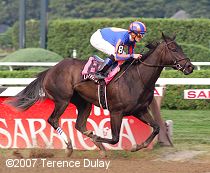 Closing out the stakes action on Saturday was the $100,000 Victory Ride Stakes (G3) for 3-year-old fillies sprinting 6 furlongs on the main track. 4-5 favorite La Traviata did not disappoint her backers, as, despite stumbling at the start, once she got into stride she led every step of the way, getting the half in 45.20 and then pulling away through the stretch to win by 9 1/4 lengths over 54-1 longest shot Half Time Crown in a time of 1:09.78. It was another 1 1/4 lengths back to 9-1 Appealing Zophie in third.
Results chart 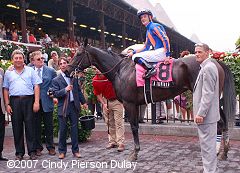 La Traviata in the winner's circle with trainer Patrick Biancone on the far left. Biancone said, "There's nothing much to say; she's unbelievable. Today, she took the lead and relaxed. She was waiting for the ones to catch up to her. The plan is to do what we have done and that plan is to go the Breeders' Cup Filly & Mare Sprint."

Her jockey Julien Leparoux said, "I didn't have to do much too much. She did it herself. It's nice. When she switched leads in the stretch, she just went. So far, she has done everything perfect."