The $500,000 Lane's End Stakes (G2) is the highlight of the Turfway Park winter meet and is a major prep for the Kentucky Derby. A full field of 12 three-year-olds went to the gate in this 1 1/8 mile event over the Polytrack, Canadian-bred Twilight Meteor was sent off as the 5-2 favorite off his 2 race win streak including the Hallandale Beach at Gulfstream in his last start for trainer Todd Pletcher. LeComte Stakes winner Hard Spun was the 3-1 second choice, having finished a disappointing fourth in the Southwest at Oaklawn last time out. 7-1 For You Reppo rounded out the top three in the win pool, making his stakes debut after a maiden win and a close second in allowance company.

55-1 longest shot Starbase battled on the pace with 8-1 Bullara through quick fractions of 22.78, 47.24, and 1:11.62, with Hard Spun close behind in third pressing the pace three wide. Twilight Meteor raced in midpack seventh taking the ground-saving path along the rail around both turns. On the far turn, Hard Spun took over the lead with minimal urging from jockey Mario Pino, as the pacesetters faded from contention. Hard Spun drew away through the stretch, easily holding off the late move of 12-1 Sedgefield to win by 3 1/4 lengths in 1:49.41. It was another 3 1/4 lengths back to 13-1 deep closer Joe Got Even in third. For You Reppo finished fourth, while favorite Twilight Meteor stayed on well through the stretch but had no rally late, finishing a disappointing sixth.

Also on the card was Bourbonette Breeders' Cup Stakes, a Kentucky Oaks preps for the 3-year-old fillies. 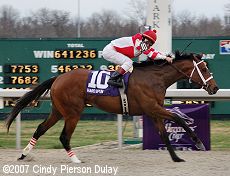 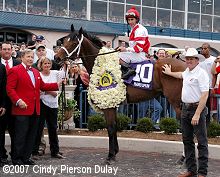 Hard Spun in in the winner's circle with trainer Larry Jones on the right and owner Richard Porter on the left. Porter said, "The plan for this race went perfect. We found that he loves this track and the race set up nice for him. We were getting a lot of hype early on and stumbled but picked ourselves back up today." 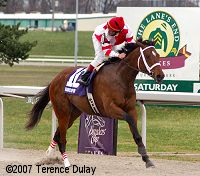 Jockey Mario Pino looks back for some competition near the end of the race. Pino said, "Turning for home, I shook him up and he took off again. I knew I had a ton of horse from the moment he came out of the gate, which just goes to show he didn't handle the track at Oaklawn last time out." 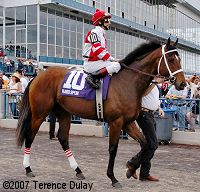 Hard Spun heads out of the paddock for the post parade. Winning trainer Larry Jones said, "We all agreed that he was not getting over the Oaklawn track. Thank goodness we had the opportunity to come here. He seems to like Polytrack, and Keeneland is almost like home. The strategy was just to let Mario and the horse do their thing. My belief is that good jockeys do not need instructions, and bad jockeys don't listen." Jones said that Hard Spun will make his next start in the Blue Grass at Keeneland. 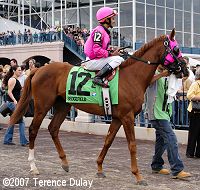 Second place finisher Sedgefield heads out for the post parade before the race. Trainer Darrin Miller said, "He's a tough colt but there are some things that he makes mistakes with that we need to look at. He is ultra talented. The post didn't seem to bother him. He ducked over fine. I give Larry (Jones) a lot of credit. We lost to a really good horse today. He really had that horse ready." Jockey Rafael Bejarano added, "I was in a good position. I let him go from the 3/8th pole but the 10 was waiting on us and just kept going on. My horse ran big." 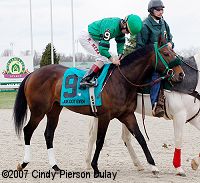 Third place finisher Joe Got Even in the post parade. Trainer Phil Sims said, "We're very happy. He ran a good race. We just tried to run our race and we did. We'll wait to see how he comes out of this before we pick the next start." Jockey Miguel Mena added, "We had a good trip. He ran super. There was a lot of speed in front of us like I thought. I just think he needs a longer stretch. He'll be tough at Churchill Downs. The trainer did good job with him." 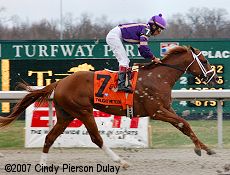 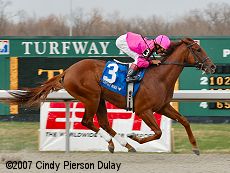 There were two other stakes races at Turfway on Saturday for 3-year-olds. The $100,000 Rushaway featured horses that were nominated for the Lane's End but did not enter. 4-1 second choice Dominican settled in fourth early while staying close to the rail while tracking the pace of 2-1 favorite Meritocracy. Through the stretch, Meritocracy faded from contention while Dominican easily accelerated late to win going away by 5 lengths over 11-1 Trust Your Luck. Meritocracy finished seventh.
Results Chart from DRF. 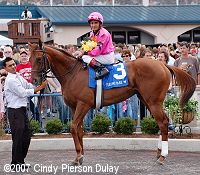 Dominican in the winner's circle. Winning trainer Darrin Miller said, "He had a lung issue with some other things, so we gelded him and saw improvement right away. I was very impressed with his tenacity and professionalism off the layoff. He did that really easy." Jockey Rafael Bejarano added, "At the 3/8 pole I thought we were in the perfect position, but we had to wait a little bit. He took off very nicely. He's a very good horse." 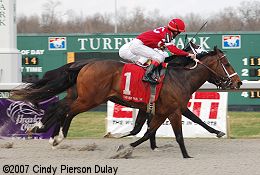 Kicking off the stakes action on Lane's End day was the $50,000 Hansel Stakes, a 6 furlong sprint for 3-year-olds. 5-2 second choice Awesome Hero stalked the pace of 7-1 Mr. Goodkat through a half in 45.30, and putting in a late rally, got up just in time to win by a head in 1:10.66. Mr. Goodkat nosed out late-charging 2-1 favorite Weather Warning for second place money, completing a three-horse blanket finish. Winning trainer Eric Reed said, "This horse was much the best. He was completely shut off from the 5/16 to the 1/16 pole, and I really didn't think he would get there." Jockey Julien Leparoux added, "He broke sharply. I was on the inside and I was a little concerned because I was blocked. I wasn't in the best place for today's races with all the speed winning. I waited and when I got a shot to go outside I did it and he took off."
Results Chart from DRF.