The $500,000 Jim Dandy Stakes (G2) at Saratoga is the major local prep for the Travers, which is the highlight of the summer meeting, contested at 1 1/8 miles on the main track. This year's edition marked the return to the track of Kentucky Derby winner and 2006 Juvenile champion Street Sense, since his runner-up finish to Curlin in the Preakness. As expected he was sent off as the 2-5 favorite in the field of six. In to challenge him were 9-2 second choice Tiz Wonderful, undefeated but unraced since he won the Kentucky Jockey Club at Churchill Downs in November, and 8-1 third choice Sightseeing, third in the Dwyer last out after winning the Peter Pan, both at Belmont. The announced attendance of 46,876 was inflated because of the baseball cap giveaway, but many did stay for the main event and loud cheers greeted Street Sense wherever he went. This spooked him and some of the others in the paddock, leading most trainers to saddle their horse in the stalls away from the crowd rather than under the trees.

36-1 longest shot Flashstorm went to the front soon after the start, taking the ground-saving path along the rail on the clubhouse turn, and he was joined on the front end by 10-1 C P West to his outside through fractions of 23.48 and 47.13 over the fast track. Favorite Street Sense settled in fifth early while Sightseeing trailed the field. On the far turn, Flashstorm faded from contention allowing C P West to inherit the lead through 3/4 in 1:11.70. However, jockey Calvin Borel, who saved ground on the clubhouse turn aboard Street Sense, took him out four wide on the far turn to put in his bid for the lead. C P West still led at the 1/8 pole after a mile in 1:36.23, but Street Sense was gaining with every stride down the center of the track. Street Sense easily ran by C P West and drew away to win by 1 1/2 lengths in a time of 1:48.99. It was just 3/4 length back from C P West to late-running Sightseeing in third, while Tiz Wonderful, who stalked the early pace in third early, tired late and finished last. 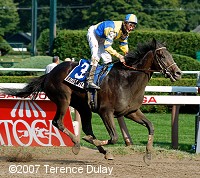 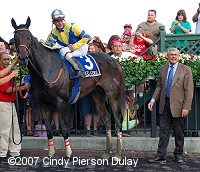 Street Sense in the winner's circle with trainer Carl Nafzger on the far right. Nafzger said, "One down, three to go. We learned a lot from this trip. We laid a little bit closer today. That was our plan. They got him in a trap and kept him there, but he got out and he responded. I was concerned; you're always concerned until you get out. You don't know how much that can take out of your horse. Once he got out, he came on with his run. It was a good, solid prep to get him ready for the Travers. I know C P West will probably be back and probably a couple of others and Curlin, too. It's going to be a tough race. You should see a horse with more timing, more rhythm and more fitness than he had today. He has a race over the track now; that should be an advantage." 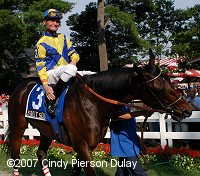 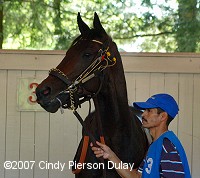 Street Sense in the paddock. His jockey Calvin Borel said, "It's great to have him back. He needed this race. It's really going to move him forward. He leveled off beautifully. He got beat last time in a great horse race. I can't take anything away from Curlin, but my colt is coming back better and stronger than he was in the spring. The time off did him great. He finished great and I still had some horse." 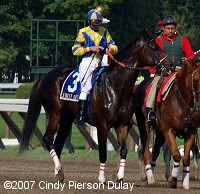 Street Sense waits to load in the starting gate. His jockey Calvin Borel said, "Horses like him come once in a lifetime. I've always thought that he was this kind of horse. He was just awesome today. A horse like him is what it is all about. Winning the Derby and everything has just been a big thing. The Travers is up to the boss man but if he's there, I'm there." 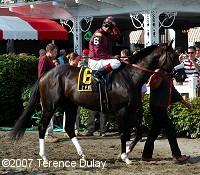 His jockey Cornelio Velasquez said, "My horse broke good. He wanted to go to the lead, but (Flashstorm) has plenty of speed, so he didn't have much of a chance. I stayed in good position, and at the 1/4 pole, he ran big. But (Street Sense) is a very nice horse. My horse ran a big one today." 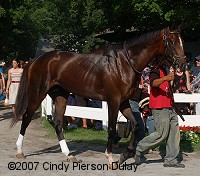 Third place finisher Sightseeing enters the paddock for saddling. His trainer Shug McGaughey said, "I thought he ran fine. He settled behind horses and was able to relax. He had a little bit of a jam around the 1/8 pole, and Street Sense ran a big race. But I saw him gallop out with (Street Sense and C P West) and I felt pretty good. I'll tell you, I feel a whole lot better about this race than I did his last one. We'll see how he comes out of this race. He did very well up here this week and I think he will continue to do well. We'll take a look at the Haskell and see what happens, and if Sightseeing does really well and the owners want to run in the Travers, I sure wouldn't be opposed to that."

His jockey Edgar Prado said, "He ran a lot better today. He was a little rank last time, but today he started out beautifully and started to pick them up on the backstretch. When I asked him to go, he finished well, so I was happy with him."