The $750,000 Whitney Handicap (G1) celebrated its 80th running this year at Saratoga. With reigning Horse of the Year Invasor retired due to injury, a field of eleven older horses faced the starter in this 1 1/8 mile event over the Saratoga main track with 29,216 on hand. This year, all four stakes races on Whitney day are part of the new Breeders' Cup Challenge "Win and You're In" program, where the winners automatically earn a berth into the corresponding Breeders' Cup race to be run at Monmouth Park in October, with the Whitney winner earning a start in the Classic.

Magna Graduate was sent off as the lukewarm 4-1 favorite coming off a close second place finish in the Stephen Foster at Churchill Downs after a win in the Excelsior Breeders' Cup at Aqueduct. In to challenge were 5-1 second choice Diamond Stripes, third in the Foster last out, and two others who shared third favoritism at 5.50-1, Oaklawn Handicap winner Lawyer Ron and Birdstone Stakes winner Papi Chullo.

29-1 longest shot Wanderin Boy was sent to the front right away by jockey Rafael Bejarano, and he was joined on the pace by 14-1 Fairbanks through fractions of 23.86, 47.37, and 1:10.28. Lawyer Ron stalked those two in third out 3 wide, while Magna Graduate settled in eighth taking a ground-saving path around both turns. Entering the stretch, jockey John Velazquez asked Lawyer Ron for run. Lawyer Ron charged past the pacesetters to take over inside the 3/16 pole and he drew away to win by 4 3/4 lengths over Wanderin Boy in a new record time of 1:46.64 over the fast main track. It was another length back to late-running Diamond Stripes in third, while Magna Graduate showed nothing in the stretch, finishing sixth. Lawyer Ron ran the distance 2/5 of a second faster than the previous track record set by Tri Jet in 1974 and tied by Left Bank in the 2002 Whitney. Left Bank, like Lawyer Ron, was trained by Pletcher and ridden by Velazquez. 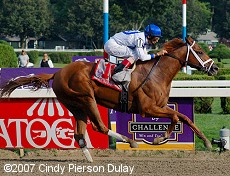 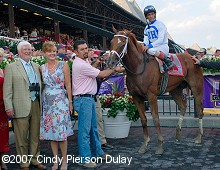 Lawyer Ron in the winner's circle. His trainer Todd Pletcher said, "He's been kind of unlucky not to win his last two starts. Yet, his figures were very impressive. I was worried about the outside post: my main concern was getting to the first turn and being pretty wide, but when he got there, he was running pretty easily. The Whitney, historically, is such a great race. We were fortunate enough to win it with Left Bank. It certainly is one of the highlights of the meet. To have a horse win it the way he did today makes it extra special. I really felt like this horse should be undefeated this year. Did I expect him to break Left Bank's track record? Nah, I thought that would stand for a little while." 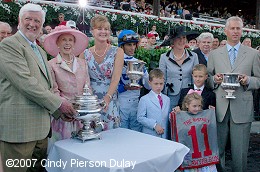 Marylou Whitney (pink hat) presents the trophies for the Whitney Handicap to the winning connections. She looked in much better health than last year. Lawyer Ron's namesake, Arkansas lawyer Ron Bamberger, is on the far left. Trainer Todd Pletcher (far right) said Lawyer Ron would use the Woodward as his prep for the Breeders' Cup Classic. 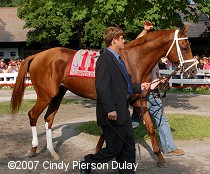 Lawyer Ron in the paddock. His jockey John Velazquez said, "It actually worked out great. The post position didn't really hurt him. I knew he was fast enough to overcome it. It was just perfect after they hit the first turn. He was comfortable. As soon as I got after him at the 1/4 pole, he switched leads. I was surprised that no one was closing, but I wasn't going to wait. My horse just exploded, he ran great." 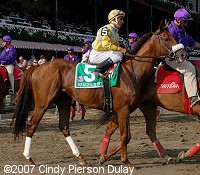 Second place finisher Wandering Boy in the post parade. His trainer Nick Zito said, "He ran a great race. It was unbelievable -- I thought that coming for home, I told Kim, my wife, `I think we're home.' We got really excited. There are mixed emotions (about finishing second again in the Whitney). I was happy walking through the grandstand. The fans were rooting. It's a great race. It's prestigious to be in the race. We got beat by a horse that ran unbelievable. What are you going to do? That's racing." Jockey Rafael Bejarano said, "My horse had the speed, but I didn't want to let him go so fast. When I was on the lead, I tried to relax him, but it was still so fast. When I came to the turn and I let him go, that horse (Lawyer Ron) started running hard. He fired today, but the other horse had a lot of class, too." 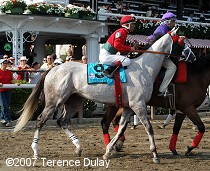 Third place finisher Diamond Stripes in the post parade. His jockey Edgar Prado said, "I don't think my horse was happy with the track. He wasn't running well over it. We made a move coming for home, but he was still struggling over the track. It was his class that carried him here." 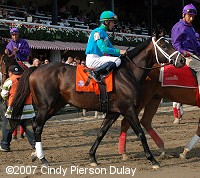 Beaten favorite and sixth place finisher Magna Graduate in the post parade. His trainer Todd Pletcher said, "Magna Graduate got stuck in between horses down the lane and he's done his best running when he's been able to get in the clear." 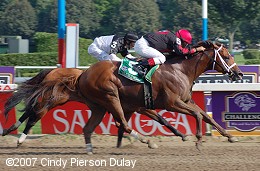 The $250,000 Alfred G. Vanderbilt Handicap (G2) featured the Breeders' Cup Sprint division, with a field of eight older horses going 6 furlongs on the main track. Maryland Sprint Handicap winner Diabolical was sent off as the 5-2 favorite over 2.85-1 second choice Benny the Bull, who came into this race off a win in the Iowa Sprint Handicap at Prairie Meadows. Commentator, third in the Tom Fool last out, was the 3-1 third choice.

Commentator and 13-1 Attila's Storm contested the pace down the backstretch through fast fractions of 21.74 and 44.45 while favored Diabolical stalked them 3 wide. The three all put in their bids for the lead at the top of the stretch, as Attila's Storm poked a head in front with a furlong to go. However, late in the stretch Diabolical pulled ahead to win by 1/2 a length in 1:08.67. It was another 1 3/4 lengths back to late-running 9-1 Simon Pure in third, while Benny the Bull was fourth. Commentator faded late to finish sixth.
Results chart 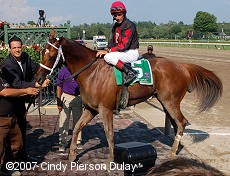 Diabolical in the winner's circle. Winning trainer Steve Klesaris said, "This was a good group of sprinters here. Any of them could have run a powerful race on any given day. I liked the spot that we were in. I felt it was going to be heated up front, and it was. Those two up front set a torrid pace and he came late on them. Diabolical is so versatile, he can sit any trip the rider pleases. It's always good to set up a long-term plan and have it fall into place." Klesaris said Diabolical would use the Vosburgh as his final prep for the Breeders' Cup Sprint.

His jockey Mario Pino added, "You couldn't set up a better trip. He's a great horse to ride. He does everything right. He's not a nervous horse. From the first time I rode him, I knew he could do everything. The race set up perfectly for him. He laid off those two horses and Steve had him perfect. It was just a matter of when to move. I said, I'm not going to move until I have to, and when I asked him, he took off. He's a pure sprinter." 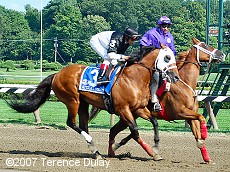 Second place finisher Attila's Storm in the post parade. His trainer Richard Schosberg said, "He ran excellent, fantastic. I think he sent a message today that he's ready again. We don't know how we're going to get there (Sprint), he runs so well fresh, but we've got plenty of time. Johnny made a few suggestions; this was the first time he's ridden him. We opened up the blinkers on him because he waits a bit. He's real good right now. I'm so pleased for the owners and the horse."

His jockey John Velazquez said, "His best races are there, out on the front. We're not going to change his style. He put in a real good fight. I think his blinkers are too tight, because he can't see the horses outside of him. But he put in a great effort." 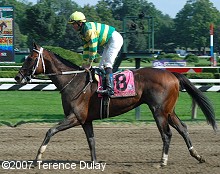 Third place finisher Simon Pure returns after the race. Simon Pure raced back in sixth early under Garrett Gomez, then circled the field five-wide on the turn and put in a good rally to finish third. He improved his career record to 3 wins, 4 seconds, and 2 thirds in 11 starts with earnings of $251,156 for the Robert and Beverly Lewis Trust and trainer Steve Asmussen.