On Friday, the New York Racing Association hosted Funny Cide Day at Saratoga, to celebrate the retirement of New York-bred Funny Cide, who won the 2003 Kentucky Derby and Preakness Stakes. Funny Cide, trained by Barclay Tagg for the Sackatoga Stable, a partnership founded by high school buddies from Sackets Harbor, NY, won his final career race, the Wadsworth Handicap at Finger Lakes on July 4, and his retirement was announced three weeks later. He retired sound and will remain with trainer Barclay Tagg and assistant Robin Smullen as their stable pony.

Fans in attendance at Saratoga received a free poster designed by Daily Racing Form cartoonist Peb, and these were autographed by jockey Jose Santos and co-owners Jack Knowlton and David Mahan, in front of the color room. Santos recently retired from riding due to injury, and was inducted into the National Museum of Racing and Hall of Fame earlier this week. As well, fans could purchase Funny Cide ice cream and sign a giant farewell card. His Kentucky Derby, Preakness, and Jockey Club Gold Cup trophies were also on display for fans to see up close and take pictures.

For the retirement ceremony, Robin Smullen paraded Funny Cide up and down the homestretch in front of the cheering crowd, as "Wind Beneath My Wings" was played over the speakers. Co-owner David Mahan said, "I never thought this morning I'd be crying this afternoon, I really didn't. When he walked by me and they started playing the Bette Midler song, I just couldn't help myself. God, he looked so beautiful out there and the crowd clapping for him. I didn't know what to expect today, but I didn't think it was this." Funny Cide also led the post parade for the 4th race, a maiden event for New York breds.

Charles Hayward, NYRA president and CEO said, "Funny Cide was a galvanizing force for both the sport's most devoted fans and for the casual observer. Just like Seabiscuit who helped rekindle America's passion for horse racing, Funny Cide reignited America's love affair with the game. We are proud to host him and his connections, including Jack Knowlton and Sackatoga Stable, trainer Barclay Tagg and Hall of Fame jockey Jose Santos, on this most memorable day." 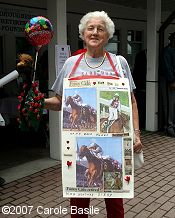 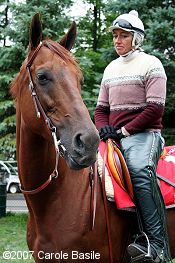 Funny Cide had lots of fans at the track to wish him good luck with his retirement. 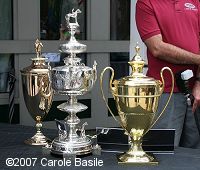 Funny Cide's trophies from the Kentucky Derby, Preakness, and Jockey Club Gold Cup were on display as well.