Kentucky Derby Day is the biggest card of racing at Churchill Downs. Before the main event, there were five graded stakes contested over the main track and turf course before the record crowd of 170,513. Conditions were ideal with a dry fast main track, firm turf, sunny skies, and temperatures in the mid 70's. 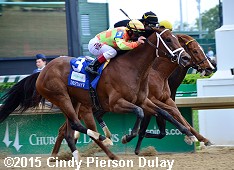 The first Grade 1 event on the card is the $300,000 Humana Distaff Stakes (G1), featuring older fillies and mares sprinting 7 furlongs on the main track. Breeders' Cup Filly and Mare Sprint (G1) winner Judy the Beauty was sent off as the even-money favorite in the field of 7 over 5-2 Dame Dorothy, second in the Santa Margarita (G1), and 11-2 Sweet Reason, winner of the Test (G1) at Saratoga but 8th in the Breeders' Cup Filly and Mare Sprint. 18-1 Moonlit Stroll set fractions of 23.09 and 46.47 while stalked by Judy the Beauty. Entering the stretch Judy the Beauty gained a short lead through 3/4 in 1:10.22 but Dame Dorothy, 3rd early, closed late to win by a neck in 1:22.67. It was another neck back to Moonlit Stroll third.
Results chart from DRF 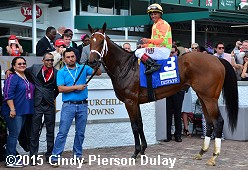 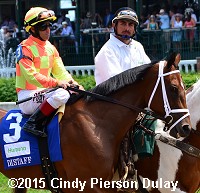 Left: Dame Dorothy in the winner's circle. Winning trainer Todd Pletcher said, "She got bounced around there pretty good at the start, but Javier was able to bounce her into the perfect spot. It was just harried the first 100 yards. We've been trying to find out her optimum distance. I wasn't a 100 percent sure that as a daughter of Bernardini, she couldn't go long. But I thought her 7/8 race at Gulfstream was probably her best to date. After that we decided to back her up into here. This is probably her niche. This was a big win. It was important for our filly to get the Grade 1."

Right: Dame Dorothy in the post parade. Winning jockey Javier Castellano said, "You've got to use this filly away from there; she's not the quickest out of the gate. So I got after her and she responded. When we got position, I felt very good. Every time I asked her, she gave it to me. Coming down the stretch I knew it was going to be close. I knew Judy the Beauty  was going to be tough. But my filly kept responding and she gave me so much confidence I felt I could celebrate a little before the wire." 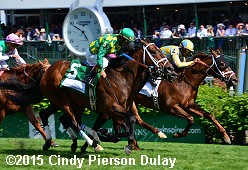 The final stakes of the undercard was the $500,000 Woodford Reserve Turf Classic (G1), a 1 1/8 mile trip over the Matt Winn Turf Course for older horses. A field of 9 went to post with San Marcos (G2) winner Finnegans Wake sent off as the 3-1 favorite over 7-2 Jack Milton, winner of the Maker's 46 Mile (G1), and 4-1 Seek Again, 9th in the Breeders' Cup Mile (G1) last out. 14-1 Sky Captain and 12-1 Umgiyo dueled for the lead through fractions of 24.44, 47.85, and 1:11.28 while stalked by 9-2 Chocolate Ride. At the top of the stretch, Sky Captain opened up a 1 1/2 length lead through 1 mile in 1:35.05, but Finnegans Wake, last early, came out for room to win by a head in 1:47.24. It was another head back to Jack Milton third. After a stewards' inquiry, runner-up Sky Captain was disqualified and placed fourth for interference when he bore out into Jack Milton in the stretch.
Results chart from DRF 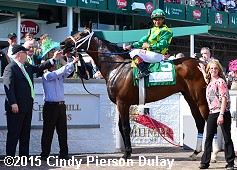 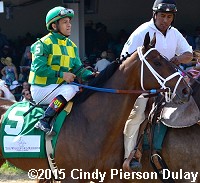 Left: Finnegans Wake in the winner's circle. Winning jockey Victor Espinoza said, "I got there just in time. Turning for home I thought I would catch him, but then I said, 'Uh-oh, this is going to be tough.' I started working on him. He's old. He wants to do whatever he wants. He wanted to take his time, so I let him do whatever he wants and enjoy himself in the beginning. Then after a half-mile I said, 'You know what, we better start moving.' I started working on him. I wanted to save ground at the end, but any little stop would have cost him the race. To swing to the outside was the best thing for him."

Right: Finnegans Wake in the post parade. The Peter Miller trainee improved his record to 7 wins, 4 seconds, and 3 thirds in 29 starts, earning $1,402,975 for owners Donegal Racing and Rockingham Ranch. 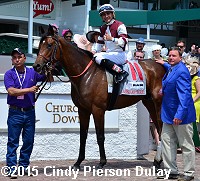 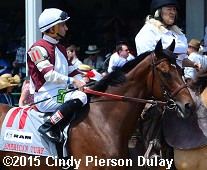 Left: Divisidero in the winner's circle. Winning trainer Buff Bradley said, "We worried a little bit yesterday because it looked like the turf course favored speed, but I told Rafael, 'Don't take him out of his game and let him run his race.' He's an awesome horse. He's professional already and it's just his third race. It's unbelievable. The owners have been great, the Gunpowder Stables. We've come up with a plan to give this horse plenty of time, and that's what's helped us."

Right: Divisidero in the post parade. Winning jockey Rafael Hernandez said, "We broke good. The race set up perfect for us and the first turn I lost a little ground because I was pushed me a little bit out so my horse stayed there he never took himself back or anything. At the 3/8 I started asking, he started picking up and just saving more ground. Turning for home we got him to the lead and he did the rest." 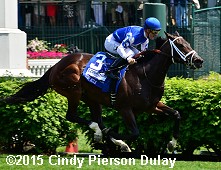 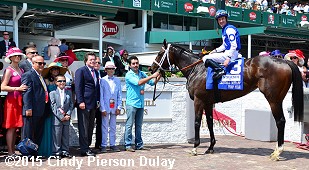 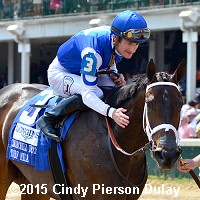 Left: Tepin in the winner's circle. Winning jockey Julien Leparoux said, "Before the race we were looking at the race and said, 'There isn't much speed.' She is a natural speed filly, so we let her run the first part of it and on the backside she relaxed beautifully and she kicked on nice at the end. When she won at Gulfstream, she was very impressive. I really like the filly and was real confident today."

Right: Tepin gets a pat from jockey Julien Leparoux. Winning trainer Mark Casse said, "These two races, she's come back really well. You know, this was Danzig Moon's workmate the other day, so when he worked so good, everybody was saying, 'Who was that?' When they got the half in 48-and-change, and I said, 'It should be over.'" 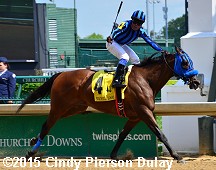 The $400,000 Churchill Downs Stakes (G2) features older horses sprinting 7 furlongs on the main track. Breeders' Cup Classic (G1) and Haskell (G1) winner Bayern was sent off as the 4-5 favorite in the field of 6 over 5-2 Private Zone, winner of the Cigar Mile (G1), and 7-2 Pants on Fire, winner of the Sir Shackleton. Jockey Martin Pedroza sent Private Zone to the lead through fractions of 22.38 and 44.64 while stalked by 30-1 longest shot Nates Mineshaft. Private Zone continued to lead to the 1/8 pole through 3/4 in 1:09.20 after Nates Mineshaft briefly closed the gap, then drove clear to win by 4 1/4 lengths in 1:22.54. It was a head back to Pants on Fire third, while Bayern faded late to finish last.
Results chart from DRF 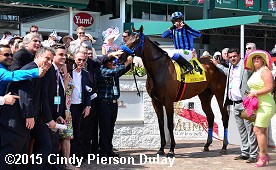 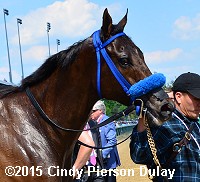 Left: Private Zone in the winner's circle. Winning trainer Jorge Navarro said, "He's been training really well coming into this race. I knew when the other horse came he would dig in. He's a fighter. I just let Martin ride his race."

Right: Private Zone heads back to the barn. Winning jockey Martin Pedroza said, "This is my first stakes win at Churchill. I am so happy to win this race for my good friend (retired jockey) Rene Douglas. I am blessed that I am healthy and doing well and I can win a race like this for him. I'm 48, but I feel like I'm 21. This is some horse. He is so good. When that horse went by me (Nates Mineshaft on the turn for home), I didn't get nervous. I just let my horse do what he does, and I knew he'd be game. Then I hit him left handed and it was all over. He's just so tough." 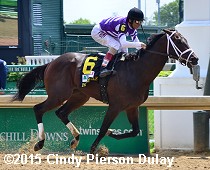 Kicking off the Derby Day stakes action was the $200,000 Pat Day Mile (G3) for 3-year-olds going 1 mile. This was formerly run as the Derby Trial on opening day but with the Road to the Kentucky Derby points system rendering it obsolete as a prep, the race was moved to Derby day with a name change. Hopeful (G1) and Tamarac winner Competitive Edge was sent off as the 6-5 favorite in the field of 8 over 5-2 Lord Nelson, 2nd in the Bay Shore (G3) after 4th in the San Felipe (G2), and 7-2 Gimme Da Lute, winner of the Echo Eddie. 11-1 Hillbilly Royalty set the pace of 23.15, 45.86, and 1:10.12 while stalked by Competitive Edge. At the top of the lane Hillbilly Royaltytired allowing Competitive Edge to inherit the lead, opening up a 2 1/2 length advantage through 7/8 in 1:21.81. Kept to task by John Velazquez he drew off to win by 4 1/2 lengths over 27-1 Pain and Misery in 1:34.18. It was another 1 1/2 lengths back to Gimme Da Lute third.
Results chart from DRF 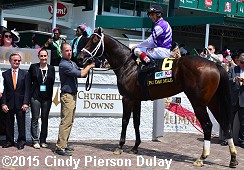 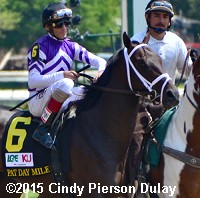 Left: Competitive Edge in the winner's circle with race namesake Pat Day on the far left. Winning trainer Todd Pletcher said, "I thought that was very impressive, especially for his first time going a straight mile. Johnny said it was pretty straightforward. The scary thing is that as impressive as that was, I think there is more in the tank."

Right: Competitive Edge in the post parade. Winning jockey John Velazquez said, "That's what we were looking for. We were looking for something fast enough to where I didn't have to be in his mouth and he rated perfectly, so it was perfect. All went according to plan."