The $500,000 Breeders' Stakes is the third gem in Canada's Triple Crown, restricted to 3-year-olds foaled in Canada. Unfortunately, the winners of the first two races in the series, Queen's Plate winner Not Bourbon and Prince of Wales winner Harlem Rocker, did not enter the 1 1/2 mile event contested over the E.P. Taylor Turf Course on Sunday at Woodbine Racetrack in Toronto. Solitaire was sent of as the 9-10 favorite in the field of ten, exiting a third place finish in the Queen's Plate following a close second in the Plate Trial, but still winless in his three lifetime starts. In to challenge the H. James Bond trainee included 5-1 second choice Sligovitz, making his stakes debut after winning two straight races including an allowance at 10 furlongs last time out, and 7-1 third choice Deputiformer, fourth in the Queen's Plate and then fifth in the Prince of Wales last time out. Conditions were ideal for racing, with sunny skies, temperatures in the upper 70's, and a firm turf course.

Shortly after the start, jockey Richard Dos Ramos hustled 9-1 fifth choice Marlang to the lead and over to the rail for a ground-saving trip, and he was allowed an uncontested lead of about 2 lengths most of the way. 24-1 Cryptonite Kid and favorite Solitaire stalked the pace down the backstretch, as Marlang walked through easy fractions of 25.39, 50.41, 1:16.24, and 1:41.61. Turning for home, Dos Ramos took full advantage of the slow pace, as Marlang began to pull away from the field after the 1/4 pole, getting 10 furlongs in a tepid 2:05.73 over the very firm going. Sligovitz, who raced in fifth early, came out wide for the drive but when whipped left-handed by new jockey Chantal Sutherland, he veered well outside. Sligovitz closed with a rush on the far outside but Marlang was long gone, cruising under the line 2 3/4 lengths clear in a final time of 2:28.58 for the gate-to-wire effort. It was just 1/2 a length back from Sligovitz to favorite Solitaire third, who could not improve his position late. 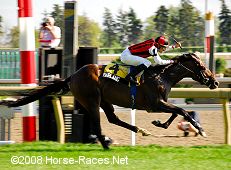 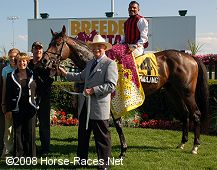 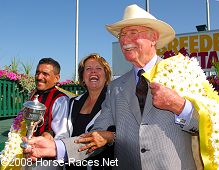 Left: Marlang in the winner's circle with owner Gus Schickedanz holding him and trainer Debbie England on the left. England said, "He was doing so well. He worked so well, by himself. It's the last three-year-old stakes for Canadian-breds. So, we said, 'Go for it.' He hated that soft turf (in the Toronto Cup), he couldn't handle it." 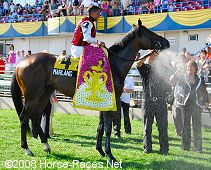 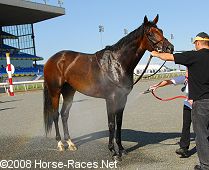 Marlang got hosed off twice after the race. On the left, trainer Debbie England hoses him off while he parades with his flower blanket for the fans. On the right, he gets hosed off before heading back to the barn. A faint rainbow can be seen on the right photo over his back legs.

Winning owner and breeder Gus Schickedanz said, "Racing is a wonderful sport. For me to win today, with this lady (England) by my side, I hope we'll never stop with more wins." 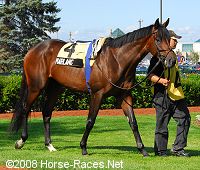 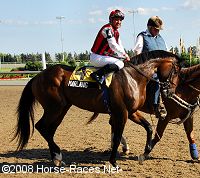 Left: Marlang in the paddock before the race. Winning jockey Richard Dos Ramos said, "When we finally had the shot (to try grass) in the Charlie Barley, he ran like the way we thought he would. We came back in the (Toronto Cup) and it just poured down rain and the turf was soft. He likes to feel his feet rattle underneath him. Going into the first turn, he was enjoying himself. I had a lot left at the top of the stretch. Debbie does put me on the nicest horses that she has. For years she has. I appreciate that. This is our biggest win together." 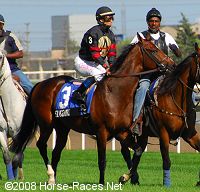 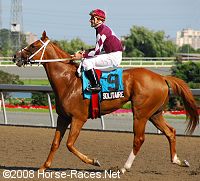 Left: Second place finisher Sligovitz behind the starting gate. His jockey Chantal Sutherland said, "He ran a beautiful race. We got to the top of the stretch and Marlang was pulling away. My horse was running extremely well. I hit him one, two, three times, and the fourth time I hit him, he went outside. I tried to get him back hitting him right-handed, just to straighten him out. He just kept going. Marlang was pretty strong. I love my horse today. He ran a good race regardless. Note to self, easy on the left hand with him. He's an honest horse." Sutherland replaced regular rider Todd Kabel, who announced he would sit out the rest of the season due to weight problems.

Right: Third place finisher and beaten favorite Solitaire returns after the race, still a maiden. His jockey Robert Landry said, "I had a perfect trip. The fractions were slow and I was right on top of them. I didn't want to take my horse away from his running style so I couldn't attack as early as I wanted to. (Marlang) ran a courageous race, he just took off. I just couldn't get to him. Unfortunately I got nosed out late (for place)." 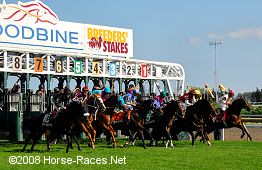 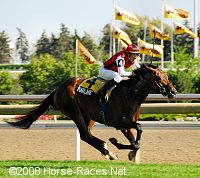 Left: The horses break from the gate for the 118th running of the Breeders' Stakes at Woodbine.

Right: Marlang flies home down the stretch with the Breeders' Stakes flags in the background. 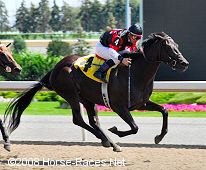 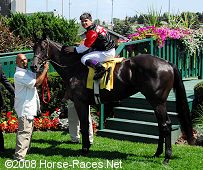 On the undercard of the Breeders' Stakes, a field of six Ontario-sired 2-year-old fillies competed in the $125,000 Nandi Stakes, a 6 furlong sprint on the Polytrack. Cawaja Beach, undefeated in two starts, her maiden and the Shady Well last time out, was sent off as the 1-2 favorite over 7-2 Cataleenda, exiting a 7 length romp in a maiden event on July 12 after losing her debut by a neck. Cataleenda went to the early lead under jockey Eurico Rosa da Silva but was quickly joined by favorite Cawaja Beach to her outside, as the pair set quick fractions of 22.12 and 45.54 over the fast Polytrack. Turning for home, Cataleenda briefly opened up a 1 length advantage but Cawaja Beach fought back, taking over the lead inside the 3/16 pole. Cataleenda gave way in the final furlong as 6-1 Koonunga Hill, who was fourth early, closed with a rush, but Cawaja Beach easily held her off on the final strides to win by 3/4 length in 1:11.01. It was another 2 1/4 lengths back from Koonunga Hill to pacesetter Cataleena third.
Results Chart

Winning jockey Daniel David said, "I didn’t expect to be so close to the pace. I thought I was going to be a little bit further back today. But the splits weren’t quite as fast. She’s been deciding what we do. So, I let her decide. She’s a great little horse to work around and work with.” Trainer and co-breeder Scott Fairlie added, “It’s an unbelievable feeling. It doesn’t get any better.”