There were two stakes races on Sunday afternoon at Woodbine, where the weather was nice with intermittent clouds, light winds, and the temperature around 70 degrees. The first on the card was the $150,000 Bold Venture Stakes for older horses sprinting 6 1/2 furlongs on the main Polytrack. This was originally a highly anticipated matchup of two Sovereign Award winners making their 2009 debuts, Horse of the Year and Champion Sprinter Fatal Bullet, exiting a runner-up finish in the 2008 Breeders' Cup Sprint at Santa Anita, and Champion 3-Year-Old Male Not Bourbon, winner of the 2008 Queen's Plate and unraced since winning the Overskate last September. However, Not Bourbon scratched the morning of the race, leaving just 5 horses to go to post, with Fatal Bullet the 2-5 favorite. In to challenge him included 7-2 second choice Field Commission, second in the Highlander Stakes on the turf after winning the Vigil on Polytrack, and 7-1 third choice Disfunction, seventh in the Vigil after winning the Jacques Cartier Stakes.

As expected, regular rider Eurico Rosa da Silva sent Fatal Bullet to the lead immediately and he set a reserved pace of 22.58 and 44.55 while a length in front of 8-1 Jungle Wave and Disfunction. Entering the stretch, Da Silva asked Fatal Bullet to open up and he did, drawing away through the final furlong to win by 2 1/4 lengths over Jungle Wave in 1:14.90, just 0.36 seconds off his own track record set in this same race last year. It was another 3/4 lengths back to 12-1 longest shot True Vindication third.

Fatal Bullet, a son of Red Bullet out of Regal Classic mare Sararegal, improved his record to 9 wins, 2 seconds, and no thirds in 12 starts, with total earnings of $861,510 for owner Danny Dion (Bear Stables Ltd.), and is the first repeat winner of the Bold Venture since One Way Love in 2000. 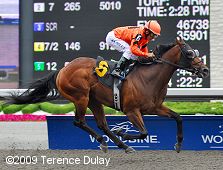 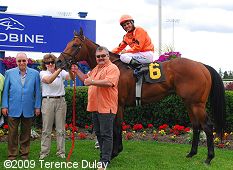 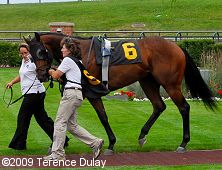 Left: Fatal Bullet in the winner's circle with owner Danny Dion of Bear Stables holding his head and trainer Reade Baker on the far left. Baker said that Fatal Bullet is a "better horse" as a 4-year-old than he was at 3. He added, "He's really good right now. I knew it would have to be something really special to get close to him today. He's a horse of a lifetime."

Right: Fatal Bullet in the paddock before the race. 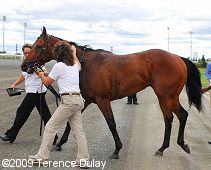 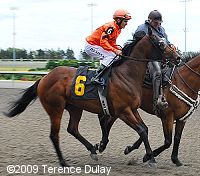 Left: Fatal Bullet in the post parade. His jockey Eurico Rosa da Silva said, "The horse was ready and looking fabulous," said da Silva. "When he went to the gate he was a little anxious. When you move your hands a little bit, he's there. I just touched the horse once."

Right: Fatal Bullet heads back to the barn after the race. 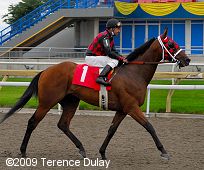 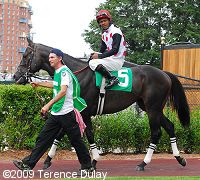 Left: Second place finisher Jungle Wave returns after the race. The 8-1 third choice stalked Fatal Bullet to his inside early under jockey Todd Kabel, was taken back at the 3/8 pole, then came back late to finish second beaten 2 1/4 lengths The Sid Attard trained son of Hold That Tiger improved his record to 5 wins, 1 second, and 1 third in 8 starts, earning $21,236 for owner Tucci Stables.

Right: Third place finisher True Vinditation in the paddock before the race. The 12-1 longest shot rated off the pace last under regular rider Patrick Husbands, closed on the turn four wide and was all out in the lane to get third beaten 3 lengths at the line. The Malcolm Pierce trained son of Vindication improved his record to 4 wins, 1 second, and 1 third in 10 starts, earning $161,347 for owner Live Oak Plantation.


The second stakes race on Sunday was the $150,000 Ontario Matron Stakes for older fillies and mares going 1 1/16 miles on the Polytrack. Smart Surprise, winner of the Chou Croute at the Fair Grounds as well as both the Hendrie and the Hill 'N' Dale at Woodbine, was sent off as the 3-10 choice in the field of seven. In to challenge her included 6-1 second choice Roses 'n' Wine, second to Smart Surprise in the Hill 'N' Dale last out, and 9-1 third choice Tell It as It Is, fourth in the Obeah Handicap at Delaware Park in her last start.

42-1 longest shot Only If Split was loose on the lead early under jockey Emile Ramsammy, setting a pace of 24.20, 48.10, and 1:11.63 while as many as 2 1/2 lengths in front of Roses 'n' Wine and 18-1 Nicki Knew down the backstretch. Turning for home, Only If Split tired badly and faded to eventually finish last, as Smart Surprise, who had raced in mid-pack fourth early, moved up to the front four-wide on the turn and quickly opened up a 2 length advantage at the furlong market. Tell It As It Is, last early, put in a strong five wide rally late but to no avail, as Smart Surprise drew off late to win by 4 lengths in 1:43.55. It was another 2 1/4 lengths back to 11-1 Arden Belle third. 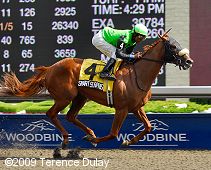 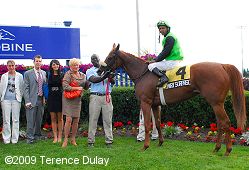 Smart Surprise in the winner's circle with trainer Josie Carroll on the far left. Carroll said, "I knew this filly was in very good order. I spoke to Patrick before the race and said, 'It looks like it might be a strategic race.' You could tell at all times he was confident in her. I really wasn't worried. They tried to fan him wide. You could see by the way she was running that she was very comfortable." 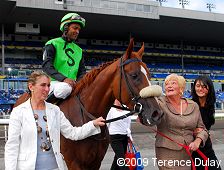 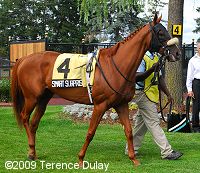 Left: Smart Surprise heads to the winner's circle. Her jockey Patrick Husbands said, "I was on much the best horse. I just sat on the bridle. When I asked her down the lane, she gave me 110 per cent."

Right: Smart Surprise in the paddock before the race. The daughter of Smart Strike out of the Storm Bird mare Weekend Storm improved her record to 7 wins, 8 seconds, and 4 thirds in 20 starts, earning $547,080 for owner J.G. Sikura (Hill 'n' Dale Equine Holdings Inc.) 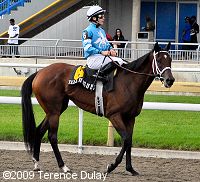 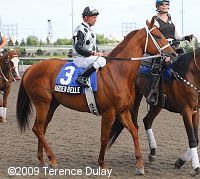 Left: Second place finisher Tell It As It Is returns after the race. The 9-1 third choice was unhurried early under new jockey Emma-Jayne Wilson, came out 5 wide on the turn and finished all out to get 2nd beaten 4 lengths. The James J. Smith trained daughter of One Way Love improved her record to 5 wins, 7 seconds, and 4 thirds in 23 starts, earning $399,621 for owner Cinnamont Stable.

Right: Third place finisher Arden Belle in the post parade. The 11-1 shot raced in midpack fifth early under new jockey Todd Kabel, came out three wide for the drive and closed the gap to get third beaten 6 1/4 lengths. The Robert Gerl trained daughter of Dance Brightly improved her record to 6 wins, 8 seconds, and 5 thirds in 20 starts, earning $479,080 for owner Salt and Pepper Stable.