The third Saturday of the 2009 Woodbine meet featured two stakes races, both on the Polytrack. Fans and participants enjoyed an initially sunny day with temperatures topping out at 81 degrees, but dark clouds rolled in near the end of the card. The feature race was the $150,000 Jacques Cartier Stakes for older horses going 6 furlongs. Legal Move was sent off as the 2-1 favorite in the field of eight, exiting a close third place finish in an allowance race last time out. In to challenge the Mark Fournier trainee included 3-1 second choice Disfunction, who defeated Legal Move in the same allowance, and 5-1 third choice Timely Advice, shipping in to Woodbine after two straight wins at the Fair Grounds over the winter.

16-1 Stradivinsky opened a clear lead exiting the chute, getting the initial quarter in a tailwind-aided 22.46 with 6-1 Field Commission just behind him in second. On the turn, Field Commission moved up to challenge and took over the lead entering the stretch, getting 1/2 in 44.12. 8-1 Shadowless, who raced in midpack fourth down the backstretch, poked his head in front in mid stretch through 5/8 in 55.85, but Disfunction came out widest of all and steadily gained on the leaders. Disfunction prevailed by a neck over Shadowless in 1:08.62, who in turn was just a neck in front of Field Commission third. The running time was just 0.31 seconds off the track record. Favorite Legal Move, who set the track record last July, raced in midpack early but failed to mount a rally late, finishing fifth beaten 3 1/4 lengths. 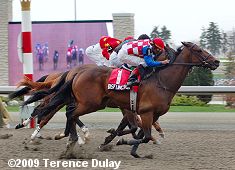 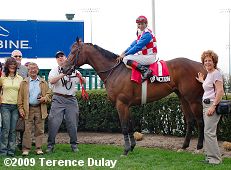 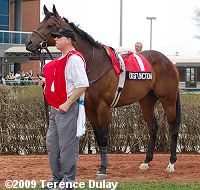 Left: Disfunction in the winner's circle with trainer Julia Carey at his hip. Carey said, "I didn't make that decision (to come from off the pace). I was surprised. I thought that something happened. But Emile did a masterful job."

Right: Disfunction strikes a pose in the paddock before the race. Winning jockey Emile Ramsammy said, "He's a horse that Julia told me doesn't need to be on the lead. I know the horse well enough that she lets me ride my race. There was a very strong wind blowing, but he's big and strong. He's a great racehorse." 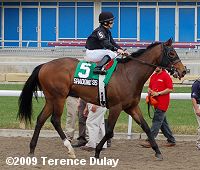 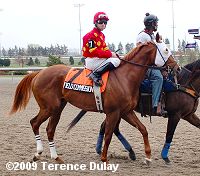 Left: Second place finisher Shadowless returns after the race. The 8-1 shot raced in midpack fourth early under regular rider Justin Stein, led at the 1/8 pole but was outfinished late. The David Bell trainee improved his record to 4 wins, 4 seconds, and 4 thirds in 15 starts, earning $355,724 for owner-breeder Heather Takahashi.

Right: Third place finisher Field Commission in the post parade. The 6-1 fourth choice battled for the lead with Stradivinsky down the backstretch and on the turn under regular jockey Tyler Pizarro, led at the 1/4 pole, but barely held third place in a blanket finish. He improved his record to 4 wins, 2 seconds, and 4 thirds in 12 starts, earning $256,418 for owner-trainer Daniel J. Vella.


Earlier in the card, a compact field of just 5 three-year-olds went in the $100,000 Wando Stakes at 1 1/16 miles. Bear's Rocket, exiting a 6th place finish in the Tampa Bay Derby after just missing in the Holy Bull Stakes, was sent off as the 4-5 choice over 9-5 Shafted, who finished fifth to Pioneerof the Nile in the San Felipe last out. 7-1 Island Drums, exiting a maiden victory at Gulfstream Park in his career debut, completes the top three on the board.

8-1 fourth choice Fierce Thunder broke sharply and set a slow pace of 26.00, 51.58, and 1:15.41 with Bear's Rocket sitting a length and a half behind him the whole way. Turning for home, Fierce Thunder tired allowed Bear's Rocket to take over at the 3/16 pole. However, 12-1 longest shot Awesome Rhythm, who was fourth early, came out wide into the stretch, took over inside the 1/8 pole, and drew off to win by 4 lengths in 1:45.49. It was another 3 1/2 lengths back from Bear's Rocket to Shafted third. 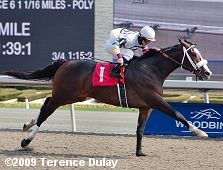 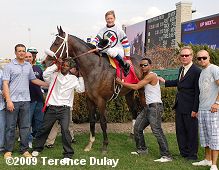 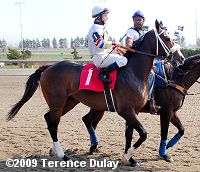 Left: Awesome Rhythm in the winner's circle. Winning trainer John Ross said, "He's made all his money here on this track. He's back home (from Florida) and he loves it. It looks like we could have a fun year with him."

Right: Awesome Rhythm in the post parade. Winning jockey Jim McAleney said, "Even going in and out of the first turn, I wasn't happy with the pace. I was hoping it was going to be better. I was content with my position. I had confidence in my horse. They really quickened at the 5/16 pole. I knew I had to have some stock to run with them. He was very impressive." 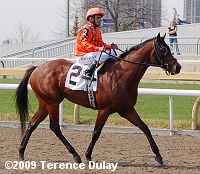 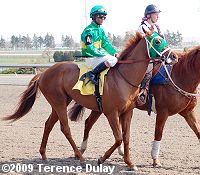 Left: Second place finisher and beaten favorite Bear's Rocket returns after the race. The 4-5 favorite pressed the pace under new jockey Eurico Rosa da Silva, gained a short lead at the 3/16 pole but was easily passed by winner in deep stretch. The Reade Baker trainee improved his record to 2 wins, 3 seconds, and 1 third in 10 starts, earning $172,320 for owner Danny Dion (Bear Stables).

Right: Third place finisher Shafted in the post parade. The 9-5 second choice stalked the pace three wide early under jockey Patrick Husbands, launched a bid at the 1/4 pole but was no match for the first two. The Mark Casse trainee improved his record to 2 wins, 0 seconds, and 3 thirds in 6 starts, earning $66,580 for owner Woodford Racing LLC.