The Belmont Stakes Racing Festival runs from Thursday to Saturday, highlighted by the 154th Belmont Stakes run on Saturday, the third leg of the Triple Crown series. After light rain overnight, the main track dried enough to be rated fast. The turf courses remained yielding, as the card was contested under partly cloudy skies and temperatures in the low 80's. 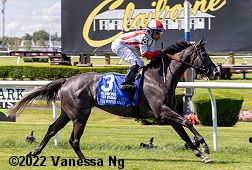 Kicking off the Festival, the $200,000 Wonder Again Stakes (G2) featured a field of 5 three-year-old fillies (after 2 scratches) going about 1 1/8 miles on the inner turf course. The top three finishers get automatic invitations to the Belmont Oaks Invitational (G1) on July 9. Breeders' Cup Juvenile Fillies Turf (G1) sixth place finisher Consumer Spending was sent off as the 2-5 favorite off her win in the Memories of Silver Stakes at Aqueduct. In to challenge her included 5-2 second choice Skims, third in the Appalachian (G2) at Keeneland, and 13-2 third choice Vergara, third in the Hilltop Stakes at Pimlico.

Jockey Luis Saez sent Vergara to the lead first time by and she set fractions of 24.53, 50.12, and 1:15.40 while pressed by SKims and stalked by 10-1 Myriskyaffair. Turning for home, Vergara tired as Consumer Spending, 4th early under Manny Franco, moved out 3 wide and swept to the lead through 1 mile in 1:39.01. Kept to task by Franco, Consumer Spending edged clear to win by 2 lengths over Myriskyaffair in 1:50.73. It was a neck back to Skims third. 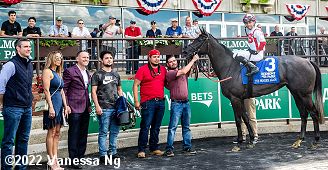 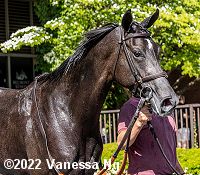 Left: Consumer Spending in the winner's circle. Winning trainer Chad Brown said, "I didn't know who was going to be where, I just knew they would be running in a little cycling pack there in a short field. Manny [Franco] just mentioned to me now that he saw Flavien [Prat aboard Skims] peek back on the other logical horse, so he figured, 'I'm going to surprise her a little and get a head in front of her,' and it seemed to work and seemed to discourage them or just put them away. From there, the only worry is that I don't like lonely horses on a long turf stretch because they can drop the bit, but she did have enough to carry it onto the wire."

Right: Consumer Spending heads back to the barn after the race. Winning jockey Manny Franco said, "I said, 'They're going slow, so I've got to move.' My filly responded to me and I just engaged them and that was it. The filly did the rest. As soon as I moved on her, she went. She has a nice turn of foot." 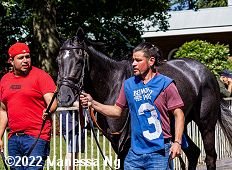 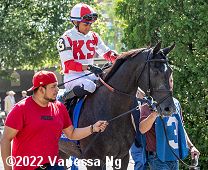 Left: Consumer Spending in the paddock before the race. Brown added, "You are always looking at her saying, well it's a More Than Ready horse and we've had so much luck with them over the years with horses like Rushing Fall and Uni, but you wouldn't be screaming for a mile and a quarter with a lot of them. But, she hasn't done anything wrong and she ran through the wire good with no target in front of her, so I have to think if she's got someone to follow, there's more there, so onto the Belmont Oaks."

Right: Consumer Spending heads out to the track. Franco added, "She's a lot more mature and Chad does a great job with his horses. I'm happy to be on her and hopefully we keep going. Yes, definitely (can get a longer distance)." 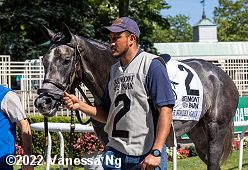 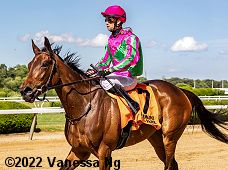 Left: Second place finisher Myriskyaffair in the paddock before the race. Jockey Joel Rosario said, "She finished very well and it looked like we had a pretty good chance to win turning for home, but it was tough to beat the winner. But she gave everything and I was happy with the way she finished. It was a tougher race today, but she fired and was running at the end, so it was good to see that." 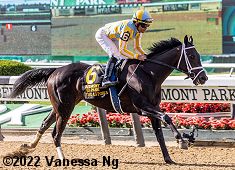 The $150,000 Astoria Stakes featured a short field of five 2-year-old fillies sprinting 5 1/2 furlongs on the main track. Churchill Downs debut winner Devious Dame was sent off as the 2-5 favorite over 3-1 second choice Girl Bye, off her debut win at Gulfstream, and 15-4 third choice Alexis's Storm, a debut winner at Laurel Park.

Jockey Trevor McCarthy sent Alexis's Storm to the lead down the backstretch through fractions of 22.67 and 46.16 while pressed by 30-1 longest shot Magic Beauty and stalked by Girl Bye. Turning for home, Alexis's Storm continued to lead but favorite Devious Dame, 4th early under Joel Rosario, came out 5 wide to sweep to the lead through 5f in 58.56, and was eased up late winning by 5 1/4 lengths in 1:04.75. It was another 9 3/4 lengths back to Girl Bye third. 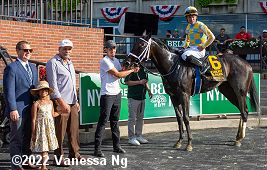 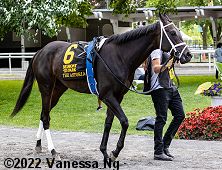 Left: Devious Dame in the winner's circle. Winning trainer Norm Casse said, "We came up here with the intention of winning but got to thinking that we'd rather let her settle a bit more than being adamant about just rushing her off her feet. I do think she's a two-turn filly and we need to teach her some of that patience now. Thankfully, it paid off. She's got a very potent combination. She's fast enough to sprint, but I really do think once we get her into two-turn races and be forwardly-placed, but in her own rhythm, she's going to be much more effective."

Right: Devious Dame in the paddock before the race. Winning jockey Joel Rosario said, "(Casse) told me to just let her come out of there and let her find her stride. She felt relaxed. At some point I had to ask her a little bit to pick it up, and she did. It looked like the further we went, she got better. It all worked out well. It's always a concern that they could keep moving more forward, but with the speed in front it looked like my filly was just getting better toward the end. When she started moving forward, I had a lot of confidence that she was going to keep going." 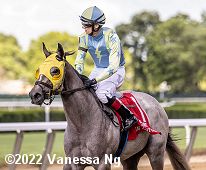 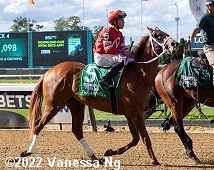 Left: Second place finisher Alexis's Storm returns after the race. Trainer Chuck Lawrence said, "We broke this filly and did everything with her there at Fair Hill and she's just done everything right. We think that she's really going to excel when we go a little farther, so that's the game plan. I told Trevor [McCarthy] if there's speed outside, don't be afraid to sit, but she had enough speed and was comfortable. We got her stakes-placed and she's exciting."

Right: Third place finisher Girl Bye in the post parade. She improved her record to 1 win and 1 third in 2 starts, earning $54,000 for owner-trainer Michael Yates. 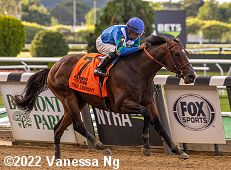 Closing out the Thursday stakes trio was the $150,000 Tremont Stakes featuring 7 two-year-olds (after 1 scratch) sprinting 5 1/2 furlongs on the main track. Keeneland debut winner No Nay Hudson was sent off as the 2-1 favorite over 9-4 second choice Two of a Kind, a debut winner at Churchill Downs, and 3-1 third choice Zelenskyy Strong, off his debut win at Gulfstream.

Jockey Luis Saez sent Two of a Kind to the lead through fractions of 22.40 and 45.48 while pressed by No Nay Hudson and stalked by 24-1 Putthepastbehind. In the stretch Two of a Kind continued to lead through 5f in 57.76, drawing off late to win by 2 lengths over Putthepastbehind in 1:04.35. It was another 1 1/4 lengths back to 7-2 fourth choice Valenzan Day third, and 1/2 a length more to favorite No Nay Hudson fourth. 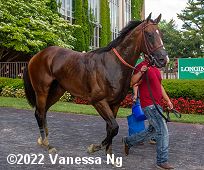 Left: Two of a Kind in the winner's circle. Winning trainer Brian Lynch said, "He's always been a precocious sort of colt. He's physically very mature and mentally he's mature. We can't be anything but happy with these last couple performances, the one at Churchill and the one today. I would say he's made the check list to go to Saratoga (for the Sanford Stakes)." Owner-breeder Christopher Swann added, "We knew this horse was special. You always hear that from the beginning, it's cliché so to speak, but this horse was special. In February we had him in Ocala and the guy who breaks my horses down there said, 'You got a good one, time to send the horse on to Brian. He's ready.'" So we sent him to Brian early, and I think this might be the earliest Brian has ever run a 2-year-old, recently at least."

Right: Two of a Kind heads back to the barn after the race. 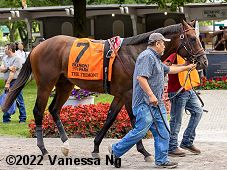 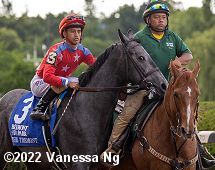 Left: Two of a Kind in the paddock. Winning jockey Luis Saez said, "The first time I rode him at Churchill Downs, he showed us that he's a very nice horse. Today, it was a different group. When we came to the top of the stretch, he was just waiting for somebody to fight. That's what it feels like. When he saw the other horse come on the outside, he gave me another gear. He looks like he's a really nice horse. He relaxed and he's a very fast horse. Last time, he surprised us. He broke so fast and opened five or six lengths. Mr. Lynch was trying to show him how to come from behind, but in the races he just wants to go. So, we just let him be whatever he wants to be. He can go seven furlongs. I'm excited."

Right: Second place finisher Putthepastbehind in the post parade. Jockey Jeiron Barbosa said, "My horse got a good trip. We ran into a nice one and were second best." 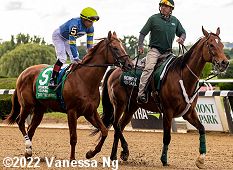 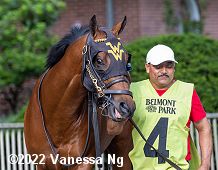 Left: Third place finisher Valenzan Day in the post parade. He improved his record to 1 win and 1 third in 2 starts, earning $67,500 for owner-trainer Rudy Rodriguez and co-owner Celeritas Racing.

Right: Fourth place finisher and beaten favorite No Nay Hudson in the paddock. The Wesley Ward trainee has a record of 1 win, 0 seconds, and 0 thirds in 2 starts, earning $38,016 for owners Andrew Farm and For the People Racing Stable.