The $1.5 million Belmont Stakes (G1) presented by NYRA Bets, contested at 1 1/2 miles, one lap of the Belmont Park main track for 3-year-olds, is the third jewel of the Triple Crown, with 46,301 fans (attendance was limited to 50,000, due to less backyard area after the addition of UBS Arena) enjoying ideal racing weather, under cloudy skies and a post time temperature of 70 degrees. With no Triple Crown on the line, a field of 8 went to post on Long Island for the 154th "Test of the Champion". All-sources handle for the Belmont Stakes was $50,248,624.

Wood Memorial (G1) winner Mo Donegal was sent off as the 5-2 favorite off his fifth place finish in the Kentucky Derby (G1). In to challenge him included 7-2 second choice We the People, 7th in the Arkansas Derby (G1) before winning the Peter Pan Stakes (G3), and 4-1 third choice Rich Strike, surprise winner of the Kentucky Derby (G1) after finishing third in the Jeff Ruby Steaks (G3).

Jockey Flavien Prat sent We the People to the lead first time by through fractions of 23.99, 48.49, 1:13.23, 1:37.74, and 2:03.06 while pressed by 12-1 Skippylongstocking and stalked by 5-1 fourth choice Nest. Turning for home, We the People tired as Mo Donegal, fifth early, came out 3 wide to sweep to the lead, opening up a 3 length advantage midstretch through 1 3/8 miles in 2:15.78. Nest gave chase but was unable to gain as Mo Donegal and jockey Irad Ortiz Jr. cruised the rest of the way to win by 3 lengths in 2:28.28. It was another 3 1/4 lengths back from Nest to Skippylongstocking third, and 3/4 more to pacesetter We the People fourth. Rich Strike was last early and came up empty late finishing sixth beaten 13 1/4 lengths. 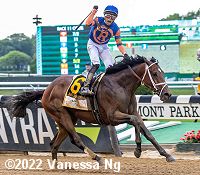 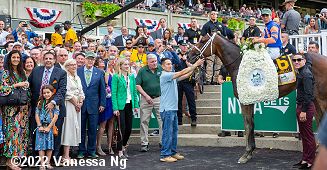 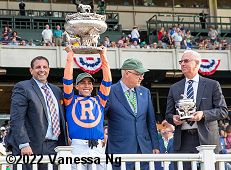 Left: Mo Donegal in the winner's circle. Winning co-owner Mike Repole said, "It's surreal, it really is. I've been coming to races for years, Aqueduct and Belmont and when I could get a car, Saratoga. Winning with Todd, my family and his family are very close. To give him his fourth Belmont is really, really special [and] to win it with a son of Uncle Mo. Todd always said he was one of the most talented horses he's ever had. You can only be three-years-old in May or June once in your life. For my silks, for a horse named ‘Mo', by Uncle Mo, it's pretty special." 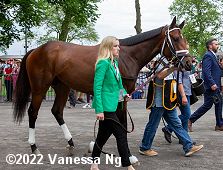 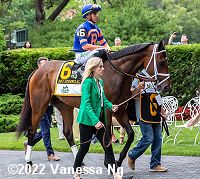 Left: Mo Donegal in the paddock. Winning trainer Todd Pletcher said, "I'm delighted, obviously, with the outcome. When Nest stumbled at the start, my first thought was immediately thinking of Rags to Riches and deciding to run her in the Belmont and seeing her stumble. But Jose [Ortiz] and her did a nice job of recovering and getting in a good position and I loved the trip that Irad was getting throughout. [Mo Donegal] was always traveling strongly and had a lot of horse and you could see as he began around the three-eighths pole, he took a look inside to see what's going on. The one thing I told him was to be a little bit patient because I believe this horse has the best last quarter-mile if you can just get him in position and ride him patiently from there."

Right: Mo Donegal heads out to the track. Pletcher added, "First of all, it's our family's favorite race. Our kids grew up here and went to school here and we've always felt like it's our hometown race. When we're fortunate enough to win it, it adds some specialness to it. That hometown feel. That part of it is really cool. Also, just the mile and a half challenge is something we've been fortunate enough to do well at. It's the ‘Test of the Champion,' so to be fortunate enough to win it four times and with some five, six seconds with some pretty nasty beats, too, is very special. It's been fun." 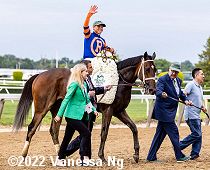 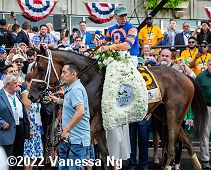 Left: Irad Ortiz Jr. celebrates aboard Mo Donegal after the race. Winning jockey Irad Ortiz Jr. said, "Last time in the Derby, he didn't have the best trip and he still got beat by [only] three or five lengths. I knew if I got a better trip, he could get there. When I asked him in the clear, he took off. He's a nice horse." Pletcher added, "I would like to thank [Donegal Racing's manager Jerry Crawford] for the opportunity to train a horse like this. Being a son of Uncle Mo, who played a huge part in my career and is doing phenomenally at stud, just adds more to it."

Right: Mo Donegal heads to the winner's circle. Ortiz added, "It means a lot to me (to win a second Belmont). It's a lot of hard work and dedication. I've been riding here for 11 years – there's no better feeling. I'm happy I won and I'm happy (brother) Jose got second." 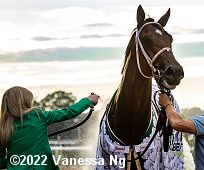 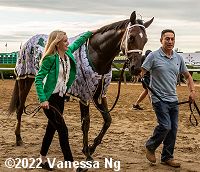 Left: Mo Donegal gets hosed off after the race. Repole added, "It's a 40-year dream. Coming to this track and Aqueduct, being a kid from New York, this is New York's race. In 2011, I came in second with Stay Thirsty and I watched the replay 150 times. I will no longer watch that replay. Getting a first and second here, it makes up for it. This was the biggest goal of my racing life, and I just accomplished it and I ran 1-2. I used to cut out of school and it made me an entrepreneur. I used to bet $20 and that's a lot of pressure when you had to pay back your parents. I'm always going to be Mike from Queens. This is New York's biggest race and to win it here, with my family and friends and 70 people here, this will be a big winner's circle."

Right: Mo Donegal heads back to the barn in his Belmont Stakes winner's blanket. 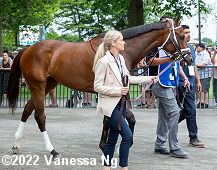 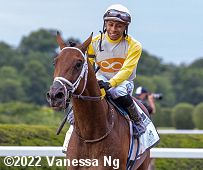 Left: Second place finisher Nest in the paddock. Jockey Jose Ortiz said, "She stumbled out of the gate. I think that was the worst break for me today. When she got up, she got a nice position on the rail. By the three-eighths pole, she was traveling very nicely. I was expecting We the People to run a little bit further and not get tired until the 3/16 and we could split horses then, but We the People was done by the 3/8. When I took a peek to go out, Mo Donegal was already there full of horse. I didn't want to make a premature move and when I called her to run, I wanted it to be my only move. I had to wait to make my move. I don't know if it would have made a difference. I know Mo Donegal was traveling very nicely at the quarter pole and traveled very nicely to the wire, so I would call myself second-best. It was a huge effort by my filly.

Right: Third place finisher Skippylongstocking returns after the race. Jockey Manny Franco said, "Man, my horse ran great. I mean, I jumped out of there and I let him go the first stride. I found myself second and I said ‘I'm going to take my shot.' He ran great. Just the first two ran a little better but I'm really happy with the way my horse ran." 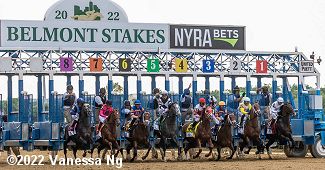 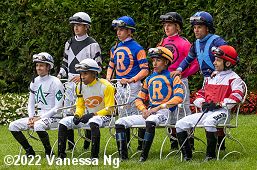 Left: The horses break from the gate for the 154th Belmont Stakes. Sonny Leon aboard sixth place finisher Rich Strike (post 4) said, "The horse broke sharp, but he broke looking the other way. I tried to keep him in stride. He was lugging in the whole way. He wanted to go to the rail. I had the horse inside me and I think he wasn't too comfortable today at this track." Trainer Eric Reed added, "We were hoping we could have been a little closer and our pace was slow. Our biggest change was deciding to stay a little off the rail and try to give him a good, open run where he could take off. The whole way, his head turned and he was trying to get to the inside. I guess we made a mistake not putting him on the fence." Rodolphe Brisset, trainer of pacesetter and eventual fourth place finisher We the People said, "We had everything the way we wanted. I just think the mile and a half was just too long, you know. That would be our first guess to why he ran like that. There's nothing you can do, you have to try and he went in 48 and two-fifths and 1:13 and it was just too long for him."

Right: The Belmont Stakes jockeys pose for a group shot before the race.