The Belmont Stakes Racing Festival runs from Thursday to Saturday, highlighted by the 153rd Belmont Stakes run on Saturday, the third leg of the Triple Crown series. After light rain earlier in the day, the main track started off rated "good" but upgraded to fast in time for the stakes races. The turf courses remained good, as the card was contested under overcast skies and temperatures in the high 60's. 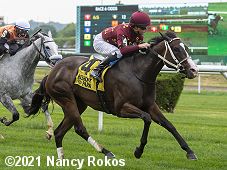 Kicking off the Belmont Stakes Racing Festival stakes program was the $200,000 Intercontinental Stakes (G3) for older fillies and mares sprinting 7 furlongs on the Widener turf. After 4 scratches, just 5 went to post with Publication sent off as the 6-5 favorite, making her stakes debut off two straight allowance wins. In to challenge her included 7-5 second choice Change of Control, second in the Unbridled Sidney last out, and 11-2 third choice Madeleine Must, unraced since finishing 4th in the Autumn Days Stakes in November.

Jockey Luis Saez sent 6-1 fourth choice I'llhndalthecash to the lead through fractions of 23.64 and 46.82 while pressed by 12-1 longest shot Piedi Bianchi and stalked by Change of Control. Turning for home, Piedi Bianchi gained the lead through 3/4 in 1:10.46 but Change of Control rallied back, despite jockey Colby Hernandez losing his whip, to win by 1 1/2 lengths in 1:22.07. It was another 1 1/4 back to late-running Madeleine Must third, while favorite Publication failed to rally and finished last beaten 5 lengths. 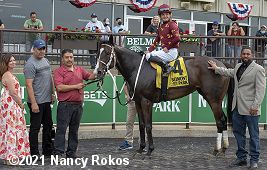 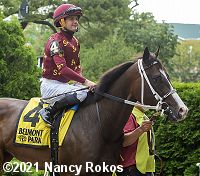 Left: Change of Control in the winner's circle. Winning trainer Michelle Lovell said, "This mare has been incredibly special to us. She tries so hard every time she runs and has been in top form this year. Colby [Hernandez] got her into a great spot early and she was able to relax behind the pace. Into the stretch, it looked like Colby had a ton of horse and when she was able to get outside, she really showed her stride late. This is a great win for everyone involved."

Right: Change of Control heads out of the paddock before the race. Winning jockey Colby Hernandez said, "When she broke, she broke sharply. She left there well, and I had to get on her a little bit. After that, I was just able to sit on her. All I needed was daylight and she kicked on. It's my first graded stakes win and my first time riding here. It's an awesome feeling." 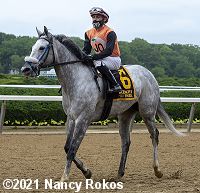 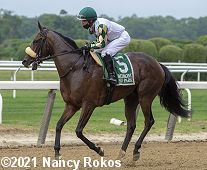 Left: Second place finisher Piedi Bianchi returns after the race. Jockey Manny Franco said, "The blinkers off helped to get her to relax. She saved her best energy for the end. She settled pretty well and made a good run." 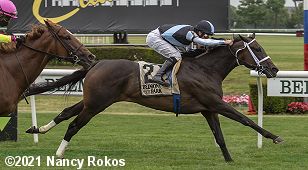 The $200,000 Wonder Again Stakes (G3) featured a field of 9 three-year-old fillies going 1 1/8 miles on the inner turf course. Gift List was sent off s the 3-1 favorite off her win in the Edgewood Stakes (G2). In to challenge her included 13-4 second choice Jouster, winner of the Appalachian (G2) and 7-2 third choice Technical Analysis, winner of 2 straight allowance races.

Jockey Luis Saez sent Jouster to the lead first time by and she set slow fractions of 25.42, 51.49, and 1:17.89 while pressed by 21-1 Alwayz Late and stalked by 8-1 Con Lima and Technical Analysis. Entering the lane Jouster continued to lead through 1 mile in 1:39.03 before tiring late. Con Lima, who saved ground around both turns under Flavien Prat, came out at the 3/16 for room and held off late-running 4-1 fourth choice Plum Ali to win by 1/2 a length in 1:50.84. It was another 3/4 length back to favorite Gift List third. 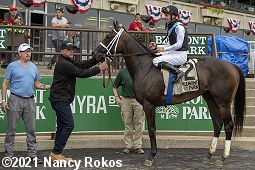 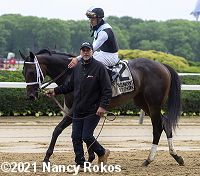 Left: Con Lima in the winner's circle. Winning trainer Todd Pletcher said, "She seems to be better on grass, I'm not really sure why. Pedigree wise, it doesn't really jump out at you. Commissioner was beaten a tough one in the [2014] Belmont here so that gives you faith that she can run further. She's been very consistent for us, she runs hard every time. She didn't seem to mind the turf. It's encouraging to see that she might stay 1 1/4. We knew Jouster was the quicker of the two, so I told Flavien to just stalk her and it worked out well. She kicked on. She's shown she can do it both ways now."

Right: Con Lima heads to the winner's circle. Winning jockey Flavien Prat said, "We had a good trip. She broke well. It took me a little time to get her to relax, but she finally did down the backside. She responded really well when I asked her to come home." 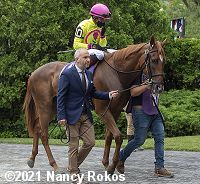 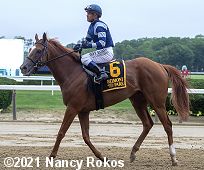 Left: Second place finisher Plum Ali heads out of the paddock before the race. Jockey Joel Rosario said,  "I couldn't get into position right away. So, I had to just wait. I had nowhere to go. She was closing better than everyone else, we just didn't get the trip." 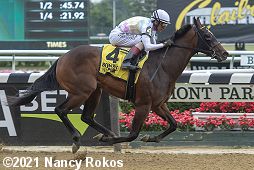 The $150,000 Astoria Stakes featured a short field of five 2-year-old fillies sprinting 5 1/2 furlongs on the main track. Happy Soul, a maiden winner at second asking last out, was sent off as the 1-5 favorite over 11-2 American Bound, 5th in the Kentucky Juvenile at Churchill Downs, and 17-2 Constitution Gal, third in her debut.

Jockey John Velazquez sent Happy Soul to a clear lead down the back through fractions of 21.92 and 45.74 while pressed by American Bound and stalked by Constitution Gal. Turning for home Happy Soul was already pulling way from the field, gaining a 6 1/2 length lead midstretch though 5f in 58.72, and finishing up 11 1/2 lengths ahead of Constitution Gal in 1:05.69. It was another 1 1/4 lengths back to 14-1 She's So Shiny third. 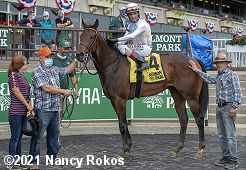 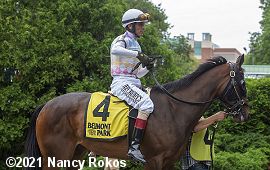 Left: Happy Soul in the winner's circle. Winning trainer Wesley Ward said, "She was 1-9, so obviously we were in the right spot. We'll have to step up in class and company next. She'll get back to Keeneland and prepare for the Adirondack at Saratoga. I was a little apprehensive to run her here, we entered with caution. If she drew the one hole or something, we may have opted out. But looking at the field, I thought it would be a good place to get a stakes win and increase the value for the owner. She hadn't had a race from her last race to this race, which I wasn't that concerned about. She was galloping beautifully."

Right: Happy Soul heads out of the paddock before the race. Winning jockey John Velazquez said, "She fell asleep in the gate. She wasn't paying attention. I had to use her coming out of there, which normally I don't want to do with [Wesley Ward's] horses because they go so fast, but I had to do it. Once I got out of there, I got into the position she wants. I just let her take her speed wherever she wanted to go. I was just worried a little bit out of the gate. I just put her on her game and let them chase her." 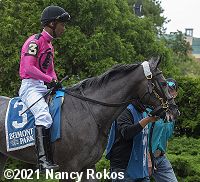 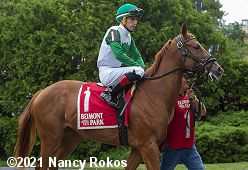 Left: Second place finisher Constitution Gal heads out of the paddock before the race. Jockey Kendrick Carmouche said, "She did everything perfect and was just second-best today. She handled the dirt, which is good, so I'm sure they got somewhere to go with her after this."

Right: Third place finisher She's So Shiny heads out of the paddock before the race. The Alberta Davies trainee improved her record to 1 second and 1 third in 2 starts, earning $27,000 for owner Marc Ricker.