The Belmont Stakes Racing Festival runs from Thursday to Saturday, highlighted by the 153rd Belmont Stakes run on Saturday. Friday afternoon's card included 5 stakes (4 graded), contested under cloudy skies and temperatures in the low 70's, however earlier rains and a passing storm during the card had the main track condition change several times (which will be noted in the text below), with the turf remaining yielding for all races over both courses. 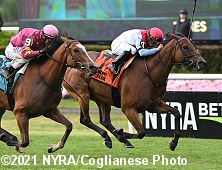 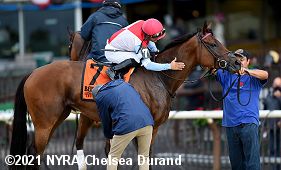 Left: Mean Mary in the winner's circle. Winning trainer Graham Motion said, "I was really anxious when I saw [No. 9, Thundering Nights] closing so fast, but I had felt pretty confident to that point. She was really running. She came out of the gate like a rabbit. I'd never seen her break like that. She really does love it. She's such a cool filly."

Right: Mean Mary heads returns after the race. Winning jockey Luis Saez said, "She just broke well and she loves to run free. I was just so glad to be on her. She got a great trip, broke out of there so well. She always breaks pretty well, but today was better than ever. She controlled the pace. The track was a little soft, but she handled it. She tried pretty hard the whole time. Johnny [Velazquez, aboard Thundering Nights] came flying there, but she gave me that last kick. She's a hard fighter." 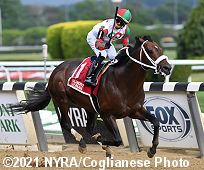 Jockey Jose Ortiz sent Firenze Fire to the lead out of the chute and he set fractions of 22.79 and 45.39 over the good main track while pressed by Flagstaff and stalked by 15-1 American Power. Turning for home, Firenze Fire continued to lead through 3/4 in 1:09.09, and pulled away late to win by 1 1/2 lengths over Flagstaff in 1:15.52. It was another 2 1/4 lengths back to American Power third. 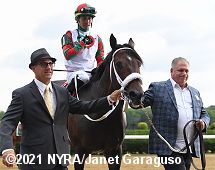 Left: Firenze Fire in the winner's circle. Winning trainer Kelly Breen said, "He's been training great. I think he's more even-keel now. I'm getting to know him even more than last year and maybe he's getting to know me, also. It's a pretty good combo right now. The first quarter was :22.3 and that's in his wheelhouse. I said we should be fine and I said that to Ron [Lombardi, the owner of Mr. Amore Stable]. That wasn't the original game plan, although we left the game plan up to Jose Ortiz. He came back and said he's a very nice horse. That's it. He's a class horse."

Right: Firenze Fire heads to the winner's circle. Winning jockey Jose Ortiz, who replaced his brother Irad who was injured in a fall yesterday, said, "It was a pressured [pace] but these are two very nice horses and they were doing it the right way. I felt underneath that he wasn't keen. He was very relaxed doing it and when I asked him to go, he was there for me. He's a very nice horse. I'm just happy I didn't mess it up. This one is for him [Irad Ortiz, Jr.]." 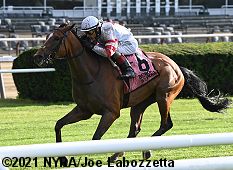 Closing out the Friday stakes action, the $400,000 Belmont Gold Cup Stakes (G2) featured a field of 9 older horses going 2 miles around 3 turns of the Widener turf. Prix de Conseil de Paris (G2) and Vintage Crop Stakes (G3) winner Baron Samedi was sent off as the 6-5 favorite over 5-1 Tide of the Sea, 7th in the Elkhorn (G2), and 7-1 Ajourneytofreedom, 4th in the Louisville (G3). 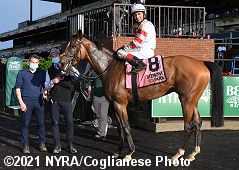 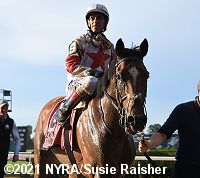 Left: Baron Samedi in the winner's circle. Winning trainer Joseph O'Brien said, "I'm really proud of both my horses. Baron Samedi is a very good horse and Johnny [Velazquez] gave him a great ride. He hadn't been that far before, but he had handled that kind of track before, so we weren't worried about the rain. We just worried about them taking the race off the turf. I'm very proud of our team and a big thanks to the owners for allowing us to do this. We don't have any plans to send horses in the immediate future to America, but we have entries later in the season and it will certainly be a possibility."

Right: Baron Samedi returns after the race. Winning jockey John Velazquez said, "This horse just doesn't get tired, he just keeps coming and coming. But I had to ride him because he's kind of slow-paced. He's a grinder; just keeps coming and coming. I didn't want to end up being a little too soon so I thought I' better just keep him going. He did everything good. Once we got to the three-eighths pole I was riding him and getting to where I wanted to be and he gave me a good feeling from then on. The course was very soft, but he handled it well. No complaints." 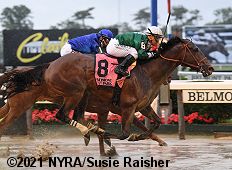 The $300,000 Bed o'Roses Stakes (G3) featured a field of 6 older fillies and mares sprinting 7 furlongs on the main track. vagrancy Handicap (G3) winner Victim of Love was sent off as the 9-5 favorite over 5-2 second choice Estilo Talentoso, third in the Derby City Distaff (G1), and 4-1 third choice Bayerness off an allowance win at Churchill Downs.

Jockey Joel Rosario sent Victim of Love to the lead and she set fractions of 22.90 and 45.87 over the sloppy and sealed main track while pressed by 13-2 Pacific Gale and stalked by 5-1 Lake Avenue. Turning for home Victim of Love tired badly as Lake Avenue took over the lead through 3/4 in 1:09.95. Estilo Talentyoso, 5th early under Javier Castellano, came out 7 wide for room and rallied to win by a neck in 1:22.96. It was another 1 3/4 lengths back to Bayerness third, while Victim of Love checked in 5th beaten 8 1/2 lengths. 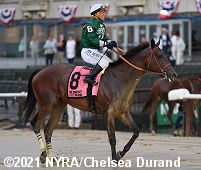 Left: Estilo Talentoso in the winner's circle. Winning trainer Juan Arriagada said, "I feel like I'm blessed. To be in Belmont today and to win with her, it's one of the more beautiful things that could happen in my life right now. I appreciate the owners giving me the opportunity. She is very special to me, that's the only thing I can tell you. I worked with her when she was a two-year-old. Finally, this is the fifth race she had with the new owners, and thank God she won the race."

Right: Estilo Talentoso returns after the race. Winning jockey Javier Castellano said, "It went well. That's what I was looking for today. Everything worked out perfect, the way it was set up. The two speed horses [went to the front] and I tried to keep track of the third horse, outside, because there seemed to be a lot of puddles on the rail, but my horse helped me to handle the situation very well. When I asked her, she responded very well and did it very well." 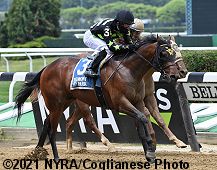 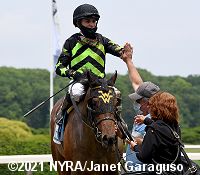 Kicking off the stakes quintet was the $150,000 Tremont Stakes featuring just 7 two-year-olds (after 2 scratches) sprinting 5 1/2 furlongs on the main track. Overbore, still a maiden after 2 starts, was sent off as the 3-5 favorite over 2-1 Trust Our Journey off his debut win at Gulfstream, 6-1 Kavod, a maiden winner at second asking, and 13-2 Baytown Frosty, 6th in the Kentucky Juvenile Stakes.

Baytown Frosty and Trust Our Journey dueled for the lead through fractions of 21.99 and 45.58 over the muddy track while stalked by Overbore. Turning for home, jockey Joel Rosario sent Overbore to the lead through 5f in 58.45, and he held off late-running Kavod to win by 3/4 lengths in 1:05.44. It was 2 1/2 lengths back to Trust Our Journey third, and 13 3/4 more to Baytown Frosty last.

David Flores, assistant to winning trainer Wesley Ward, said, "He's not quick coming out of there, but Joel [Rosario] really knows him. He said he might be just right off the pace. He got after them at the right time and it was a great run at the end. When you get winners, it's a good spot to be in. Wesley and I have known each other almost 30 years. When he was riding, I was riding on the West Coast. We go back to since we were kids. It's a great friendship."

Winning jockey Joel Rosario said, "He broke better than the first time I rode him. It looked like those two horses [Baytown Frosty, No. 1 and Trust Our Journey, No. 4] were going to keep the speed going. I was setting up in the perfect spot. When I said go, he was there for me. He kept going from there." "He is very talented. He didn't break that well, but he came with a nice run at the end, so that was a very good performance."