Of the three Triple Crown races, the undercard of the Belmont Stakes has the most prestigious races on its undercard. This year, the 47,562 fans on hand were treated to 5 stakes (4 graded) which preceded the main event including two Grade 1 events. Despite heavy rains on Friday, sunny dry conditions and mid-70's temperatures on Saturday improved the track from good early in the card to fast in time for the Woody Stephens, while the turf remained yielding.

Immediately before the Belmont Stakes was the $500,000 Woodford Reserve Manhattan Handicap (G1), with a field of 8 older horses going 1 1/4 miles over the inner turf course. Point of Entry was sent off as the 1-2 favorite off his win in the Gulfstream Park Turf Handicap (G1). In to challenge him included 11-2 second choice Optimizer, third in the Dixie (G2) after finishing second in the Woodford Reserve Turf Classic (G1), and 7-1 third choice Twilight Eclipse, winner of the Pan American (G2). 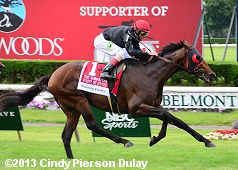 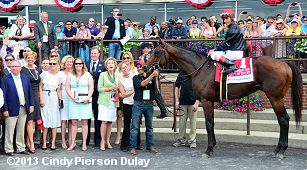 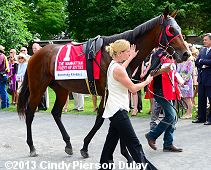 Left: Point of Entry in the winner's circle. Winning trainer Shug McGaughey said, "I thought he got into a good stride," McGaughey said. "I was a little surprised at the early fractions. I thought maybe (Bombaguia) would be the speed, then (Plainview) went. (Velazquez) got him into a good spot; he said that's where he wanted him to be. For a horse who has only run one time since last November, carrying 124 pounds, I think it was probably starting to tell on him a little bit the last 1/8 mile. I'm very, very proud of what I saw today. He's a very, very good horse."

Right: Point of Entry in the paddock. Jockey John Velazquez said, "We all know that this type of course is not his favorite, but every time you ask him to run, he gives you everything he has. It's really nice to be able to ride these kind of horses. Sometimes it looks like he's not going anywhere, but he's running hard. He's so big it takes him a long time to get going, but he still runs his heart out."

Jockey Mike Smith sent Mizdirection to the lead down the backstretch and she set fractions of 24.50, 48.13, and 1:12.55 over the yielding course while pressed by 7-1 Laugh Out Loud. Entering the stretch, Mizdirection tired badly as Stephanie's Kitten on the inside and 11-1 Better Lucky on the outside ran by her and set up a duel to the line. Stephanie's Kitten outfinished Better Lucky by 1/2 a length, completing the trip in 1:36.27. It was another 3 lengths back to 7-2 Hungry Island third, and 1 more to favorite Centre Court fourth. 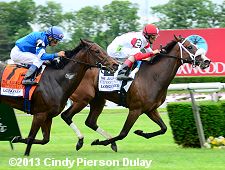 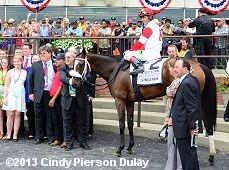 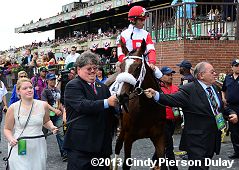 Left: Stephanie's Kitten in the winner's circle. Winning trainer Wayne Catalano said, "They moved the rail in and (lane 1) hadn't been touched all year. So, the two path was the path to be in. We were in the No. 2 hole and when the hole opened up, and Johnny stuck her head in there, I was happy with it, I really was. When it's a horse race like that – it looked like it was going to be a bob of a head – I was worried about that. When she sprinted away I was happy."

Right: Stephanie's Kitten takes her walk down Victory Lane. Jockey John Velazquez said, "It was do-or-die, you stay there or you die in there. It was one of those things. She handled the ground great so that was the most important thing. When I asked her, she was there for me. The opening was there. I saw (Mizdirection) was drifting out anyway, and I was behind Julien (Leparoux on Centre Court). I know she gets out a little bit, so I sat there right next to Julien. I thought if I could hold him in there and then get through on the inside, it would be perfect. It opened up just enough for me and when I shot through there, she went." 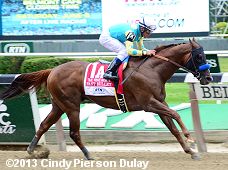 The $400,000 RTN True North Handicap (G2) featured a field of 6 older horses (5 betting interests) sprinting 6 furlongs on the main track. The two-horse Zayat Stables of Count Fleet Sprint (G3) winner Justin Phillip and allowance winner Fast Bullet was sent off as the 4-5 favorite over 5-2 second choice Sage Valley, winner of his last 4 including the Maryland Sprint last out, and 7-2 third choice and defending champion Caixa Eletronica, 5th in the Charles Town Classic (G2).

Jockey Joel Rosario sent Fast Bullet to a clear lead down the backstretch through fractions of 22.48 and 45.16 while stalked by 15-1 Off the Jak and 13-1 Laurie's Rocket. Into the stretch, Justin Phillip moved up to challenge his stablemate but Fast Bullet easily turned him away by 2 1/2 lengths in 1:08.27. It was a long 4 1/2 lengths back to Laurie's Rocket third.
Full results chart 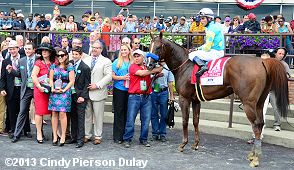 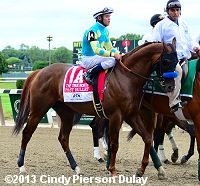 Left: Fast Bullet in the winner's circle. Tonja Terranova, assistant to trainer Bob Baffert said, "Bob sent him in and said he was ready to roll. He came in here and trained great the last few days. He was ready, just like Bob said he was. Joel was just cruising on him. I mean, he had a ton of horse. Bob said he's really fast; the main thing was just getting him out of the gate, which he did, and that was it. I'm happy for the Zayats. They put a lot of time into him, so it was good for them."

Right: Fast Bullet in the post parade. Jockey Joel Rosario said, "He broke well. I'd watched his races and he always breaks a little bit slow, but he broke well today. He's really fast and he took me to the winner's circle." 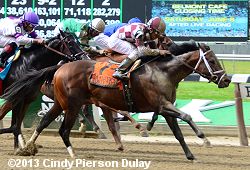 The $400,000 Woody Stephens Stakes (G2) presented by NYRA Rewards featured 11 three-year-olds sprinting 7 furlongs on the main track. Came Home winner Let Me Shine was sent off as the 2-1 favorite over 9-2 second choice Declan's Warrior, winner of the Gygistar and the Bay Shore (G3), and 5-1 third choice Clearly Now, second in the Bay Shore after winningh the Swale (G3).

Jockey Edwin Maldonado sent Let Em Shine to the lead and he set fractions of 21.99, 44.73, and 1:09.21 over the fast main track while stalked by 6-1 fourth choice Zee Bros and 26-1 Salutos Amigos. Let Em Shine led to midstretch but the hot pace set the race up for the closers. 9-1 Forty Tales, 10th early, rallied on the outside to win by 3/4 length over Declan's Warrior in 1:22.47. It was just a head back to Clearly Now third, and another head to favorite and pacesetter Let Em Shine fourth.
Full results chart 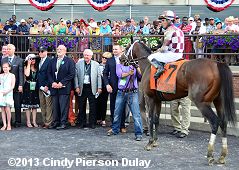 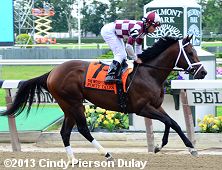 Left: Forty Tales in the winner's circle. Trainer Todd Pletcher said, "He's a real solid horse. He shows up and runs hard every time. The biggest concern was just how the racetrack was playing. We can't change his style at this point, so we just let him run his race and, fortunately, they went fast enough to come back to him today. I was concerned about the California horses. They're obviously some talented horses with a lot of speed. I was kind of hoping for more of a speed duel but it looked like they were going fast enough to set it up for a closer. We're fortunate to have a lot of good 3-year-olds, and none of them are as brave as this one."

Right: Forty Tales in the post parade. Winning jockey Joel Rosario said, "It looked like they were going a little quick in front and he always comes from off the pace, anyway. I thought we could take advantage of that to try and win the race. He broke well and I started finding myself way behind, but I was hoping they were going quick enough so I could finish with him. He did everything right and just got the jump in the last minute. He really finished. He tried hard, the little horse, and everything set up perfect." 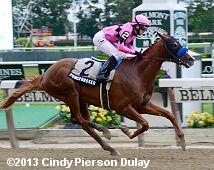 Kicking off the stakes action on Belmont day was the $150,000 Easy Goer Stakes for 3-year-olds going 1 1/16 miles around one turn of the main track. Power Broker was the 6-5 favorite over 7-2 Wabbajack and 4-1 Irsaal. 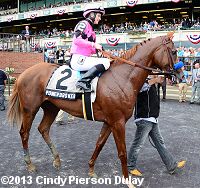 Power Broker in the winner's circle. John Terranova, assistant to winning trainer Bob Baffert said, "He came in a few days ago in great shape. His allowance victory at Churchill was impressive and it looked like it was a great effort today and everything went smooth. Obviously he was the best horse in the race. Rosie gave him a great ride and kept him out of trouble." Jockey Rosie Napravnik added, "I figured we would be close. There was actually a nice pace up front. I breezed him a couple of days ago and I knew he was coming into the race on his game. He was running very comfortably the whole way."