The $1 million Belmont Stakes (G1) is the final leg of American racing's Triple Crown for three-year-olds and the highlight of the New York racing season, contested at the marathon distance of 1 1/2 miles, one complete trip around the main track at Belmont Park. After heavy rains soaked the track all day Friday, just 47,562 fans (a 22% drop from last year) came out to the historic Long Island oval, under sunny skies and temperatures in the mid 70's. The track was good at the start of the card but was upgraded to fast during the undercard stakes.

As Kentucky Derby(G1) winner Orb failed to fire in the Preakness (G1), won by Oxbow, racing will have to wait another year for the next Triple Crown winner. Orb, off his disappointing 9th place finish at Pimlico, was sent off as the 2-1 favorite in the field of 14. In to challege him inlcluded 5-1 second choice Revolutionary, third in the Derby last out, and 8-1 third choice Freedom Child, winner of the Peter Pan Stakes (G2). Preakness winner Oxbow was all but dismissed as the 10-1 fourth choice on the board.

Jockey Alan Garcia sent 30-1 longshot Frac Daddy to the lead first time by and he set fractions of 21.33 and 46.66 while pressed by Freedom Child and Oxbow. Down the backstretch, Oxbow took over from the tired Frac Daddy, getting 3/4 in 1:10.95 and 1 mile in 1:36.47. Entering the stretch, Frac Daddy and Freedom Child tired badly, as 14-1 Palace Malice, who had stalked the pace in fourth the whole way, moved up to take over through 10 furlongs in 2:03.12. Oxbow tried to stay with him to no avail, as Palace Malice drew off in deep stretch to win by 3 1/4 lengths in a slow 2:30.70 over the fast main track. It was another 1 3/4 lengths back to late-running favorite Orb third. 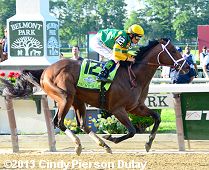 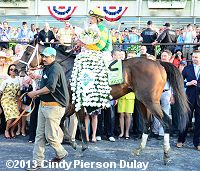 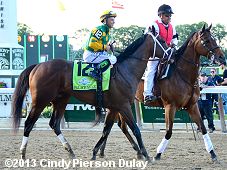 Left: Palace Malice in the winner's circle.Trainer Todd Pletcher said, "He was relaxed.  It was actually, I thought, for a Belmont, pretty keenly run, first part of the race.  But the main thing was, Mike was able to get him to a real comfortable rhythm.  The horse had trained really impressively, and we just felt if we could get him into that rhythm, get him relaxed, it wouldn't necessarily matter if he was on the lead, fourth, fifth. Wherever he was, it wouldn't matter as long as Mike had him in that big gallop he had."

Right: Palace Malice parades for the fans after the race. Pletcher added, "It was an emotional win for me because the Dogwood connection. Mr. Campbell gave me an opportunity when no one knew who I was, and I didn't have any horses. They supported me from the very beginning and to win a big race for them is really gratifying." 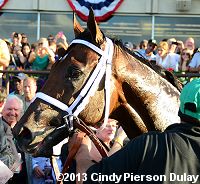 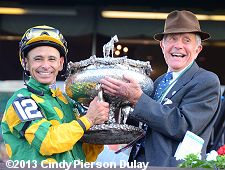 Left: Palace Malice heads back to the barn. Jockey Mike Smith said, "He certainly got a lot out of the Derby. I meant he went quick enough.  And he ran a sneaky race in the Derby.  It wasn't like he just folded at the quarter pole and just everybody went by him. I mean, he was actually stealing the race at the 1/8 pole.  You take into consideration he never once took, never got a second breath of air running that fast.  He ran incredibly well. Today, that's all he did.  I mean, it seemed like every ten strides he would just fill up with air again, there he'd start.  It's a beautiful rhythm.  That's all it was, was getting him into that rhythm.  Certainly bred to go the distance.  All along, Todd always told me he's got it in him. And he rode the perfect game plan.  It ran just like he rode it.  I'm just happy to be a part of it." 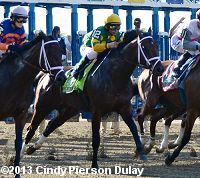 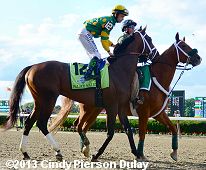 Right: Palace Malice shortly after the break. Owner Cot Campbell of Dogwood Stable said, "I don't think (the win) will accelerate my retirement.  I'll put it that way.  And I have cut back.  We used to carry 65 horses.  We've got 30, 35 now, and I'm going to just play it as it comes along.  I enjoy what I do. God knows I've had the most wonderful life a human being could have, and this is a great chapter in it. And so I'm not in any hurry to do anything but keep on doing what I'm doing.  As I have said, I don't want to chase any rabbits I can't catch. It's been a great relationship (with Pletcher and we've hit it off, we never had a bad moment, and I'm proud of what he's done. He will go down as one of the great trainers in the history of the game.  At least I had the good sense to give him a shot early on." 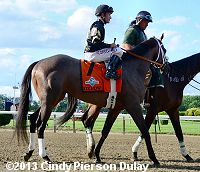 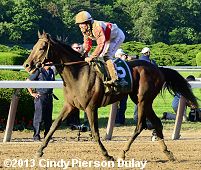 Left: Second place finisher Oxbow in the post parade. Trainer D. Wayne Lukas said, "I was really happy with his performance today. Anytime you could hook into a field with that much parity and that many good horses. He performed as well as we could have expected." Jockey Gary Stevens added, "I thought I was dead midway down the backside. They were suicidal fractions and he never got any break. Midway around the turn, I said, 'Well, maybe.' But I have ridden long enough to know that he was going to walk home the last 1/4 mile. Going into the far turn, I didn't think he would have hit the board. To finish second, I am really surprised. He galloped out after the race like you wouldn't believe. I'm really proud of him."

Right: Third place finisher Orb returns after the race. Trainer Shug McGaughey said, "He made a good run around the turn, but we had given up so much. The speed horses held all up front and we just couldn't catch them. It's been fun. I've got no problems with anything. Everything's fine with me. I just wish we had showed a little better performances in the Preakness and the Belmont. I don't think he got tired. He put a pretty good run in to get to where he was, and those horses just weren't coming back. If they had come back, we'd have been fine. They shook loose and we were just too far back to catch them. I thought there would be some pace. I was a little concerned because we were pretty far back."

The horses break from the gate for the Belmont Stakes. Jockey Joel Rosario aboard Orb, who was 13th for the first 1/2 mile, said "I thought I had a perfect trip. I saw they were going pretty quick up front, and he was handling everything fine. I moved him to the outside like he's done before, but in the end I couldn't even make it up to second. At 1 1/2 miles, they are all going to get a little tired, but he was starting to get late. I felt when he was moving, I was pretty confident like in the Kentucky Derby, but maybe it was the distance, or maybe he was just tired."