The highlight of the American jump racing calendar is the Far Hills Race Meeting, held at Moorland Farms in Somerset County, New Jersey in late October. This year the meeting celebrated its 87th running, and again hosted the $300,000 Breeders' Cup Grand National Steeplechase (G1). Nine hopefuls went to post in this 2 5/8 mile trip over 14 national fences, but clearly the eyes of the sellout crowd of 50,000 were on McDynamo, who had won the race four consecutive years, from 2003 to 2006, and was going for his fifth victory. There is no pari-mutuel wagering at Far Hills, but clearly the 10-year-old McDynamo was the sentimental favorite, coming off a fourth place finish in the Iroquois Hurdle (G1) in Tennessee in May. His biggest challenge, Iroquois (G1) winner Good Night Shirt, came into the Grand National off a victory in the Lonesome Glory (G1) at Belmont Park on September 22.

Luongo took the lead soon after the start and was stalked by McDynamo as the pair jumped the first ten fences cleanly. After a mile, McDynamo drew even with the tiring Luongo, who stumbled at the twelfth fence, fading back to sixth, and was pulled up at the top of the stretch. Good Night Shirt, who had followed the pacesetters in third, inherited second place and stalked McDynamo on the outside for the second mile, settling a length behind the champion. However, around the far turn, jockey Jody Petty asked McDynamo for his best stride and got it, as McDynamo steadily increased his lead with 3 furlongs to go. At the 1/8 pole he had drawn away to a 6 length lead and Jody eased him up at the line, as he finished 6 lengths clear of late-running Sweet Shani in a time of 5:30.60 for the 2 5/8 mile trip over the soft turf course. It was 1 1/2 lengths back to Best Attack in third, while Good Night Shirt weakened after the 13th fence, finishing fourth. 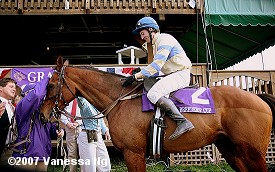 McDynamo in the winner's circle. His jockey Jody Petty said, ōWhen he walks out of the paddock here, he walks out like he's home. I don't know why, but I can feel it. He knows where he is, he knows what he's doing. He gives you chills riding him and people tell me he gives them chills when they're watching him. He's a horse of a lifetime, there's no denying that.ö 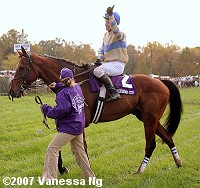 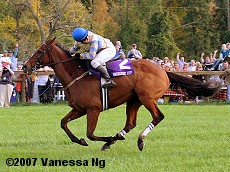 Left: McDynamo parades after the race.

Right: Jody Petty looks for the competition during the run to the finish. Petty said, ōI was keeping him in check early on and made him jump a couple short to stay in behind. On the backside, I told him we could go jump his way and he just pinged all three of those fences and ran away from them. Coming up the last turn, I thought I had given him a little bit of a breather. I kicked him on again, I looked back before the last fence and they weren't getting there. I was pretty surprised at that. All I had to do was keep him together to get him over the last hurdle." 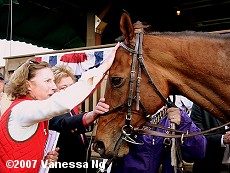 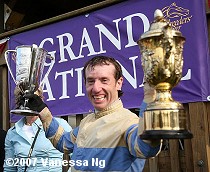 Left: Trainer Sanna Hendricks pets McDynamo after the race. Hendriks said, ōI didn't come here anticipating the win, but I guess I was cautiously optimistic. I just didn't want to let him down and I didn't. He got here in great shape, on top of his game and he showed it. It's a pretty special win. HeÆs won three (Eclipse Awards) already (in 2003, 2005, and 2006), so if he doesnÆt win another, so what?ö 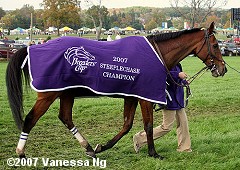 McDynamo heads back to the barn with his winner's blanket. Owner Michael Moran said, ōWhat more does he have to prove?ö 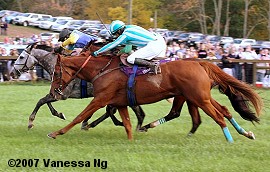 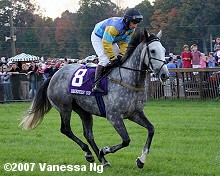 Left: Second place finisher Sweet Shani warms up before the race. Sweet Shani, the only mare in the field, came into the race off a fourth place finish in the Lonesome Glory(G1) at Belmont. The New Zealand bred stalked the pace in fifth on the outside of the course under jockey Xavier Aizpuru, made a bid for the lead at the top of the stretch, but was no match for the champ. The Jonathan Sheppard trainee improved her record to 5 wins, 4 seconds and 5 thirds in 26 starts, earning $205,073 for owner Calvin Houghland.

Right: The battle for second and third place in the final straight between Sweet Shani, Good Night Shirt (outside), and Best Attack. 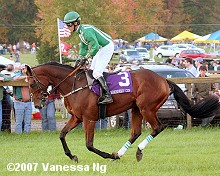 Third place finisher Best Attack warms up before the race. Best Attack was seventh in the Lonesome Glory(G1) after winning the National Hunt Cup (G1) in May. The 6-year-old saved ground while back in fifth early on under reular rider Chip Miller, put in a late rally along the inside after 2 miles but struck the 12th fence, weakening late to finish 1 1/2 lengths back of Sweet Shani. The F. Bruce Miller trainer improved his record to 6 wins, 4 seconds, and 2 thirds in 25 starts, earning $197,994 for owner Sarah Jeffords Radcliffe. 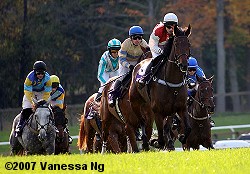 The horses run up the hill to the first jump early in the race.