The 24th edition of the Breeders' Cup World Championships added a new twist with 3 more races run on the Friday in addition to the original eight on Saturday. Just 27,803 came out to Monmouth Park on a dreary afternoon during which a steady rain fell which rendered the track sloppy and the turf course yielding. Conditions were far from ideal for participants and fans alike, with many seats left empty as patrons hid under the stands to take shelter from the rain.


The highlight race of the card was the $1 million Breeders' Cup Dirt Mile for older horses going 1 mile and 70 yards on the main track. Eight went to post with Discreet Cat sent off as the 3-2 favorite despite not winning since last November. 7-1 Gottcha Gold was loose on the lead through a half in a quick 45.94, then 7-2 second choice Corinthian split horses at the top of the stretch and drew away to win by 6 1/2 lengths over Gottcha Gold in 1:39.06 over the sloppy, sealed track. It was a long 8 1/4 lengths back to favorite Discreet Cat who stalked the pace in third but failed to fire when asked by jockey Garrett Gomez.

Winning jockey Kent Desormeaux said, "Fifty yards out of the gate, I was nine abreast. I said, 'This is ridiculous' and I just pulled him up and ended up inside of the whole field down on the fence. It turned out to be the perfect position to keep his face clean. This colt is a fireball. He just dragged me down the stretch." 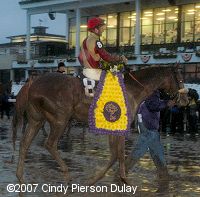 The $1 million Breeders' Cup Juvenile Turf saw a field of twelve 2-year-olds go 1 mile on the turf. European invader Achill Island was sent off as the 3-1 favorite over 7-2 American horse Prussian. However, 13-1 outsider Nownownow, who raced at the back of the field for the first 6 furlongs well off the slow pace set by Prussian of 49.59 and 1:15.00, came out 6 wide into the lane and closed with a rush down the center of the course to get up by 1/2 a length over fellow late-runner Achill Island in 1:40.48 over the yielding course. It was another 1 3/4 lengths back to 15-1 Cannonball in third, while Prussian tired badly through the stretch to finish 10th.

Winning trainer Francois Parisel said, "The weather was an obvious worry but we knew he had the breeding on both sides to handle the soft going. Our plan was to relax behind horses and then make one run. It worked out today. He's a very nice colt. I'm very happy. Mr. (Patrick) Biancone (original trainer) deserves a lot of the credit. This was a team effort." 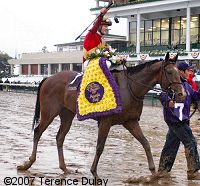 Kicking off the 2007 Breeders' Cup was the $1 million Breeders' Cup Filly and Mare Sprint, for older fillies and mares sprinting 6 furlongs on the main track. La Traviata was sent off as the 2-1 favorite over 3-1 second choice Dream Rush. Dream Rush was allowed an uncontested lead through fast fractions of 23.29 and 44.19, which set the race up for the closers. 8-1 Maryfield, who settled in sixth early, came out 6 wide into the lane and closed with a rush to win by 1/2 a length over another closer, 44-1 longest shot Miraculous Miss, in 1:09.85 over the sloppy track. It was another 1 1/2 lengths back to 6-1 Miss Macy Sue in third, while La Traviata tired late and was sixth.

Winning jockey Elvis Trujillo said, "She finished so strong. They were going too fast on the front end. I knew they were going to stop. With them going so fast, I knew it was going to help us. I'm thrilled, thrilled." 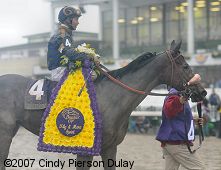 Kicking off the stakes action on Friday was the $250,000 Inside Information Breeders' Cup Stakes for 3-year-old fillies at 1 1/16 miles on the main track. 7-5 favorite Tessa Blue led every step of the way, drawing off through the stretch to win by 12 1/2 lengths over 8-1 Lost Etiquette in 1:41.74. It was another 3 lengths back to 9-5 second choice Talkin About Love in third.

Winning jockey Mike Smith said, “That was a Breeders’ Cup performance. She ran dynamite. She handled the mud so well and just skipped away from them when I asked her. It was all her. I let her run from the 1/4 pole to the 1/8 pole, and that was it.”


The $250,000 Epitome Breeders' Cup Stakes featured 2-year-old fillies going 1 mile on the turf. 8-1 Sea Chanter settled in fifth off the pace set by Joffe's Run, then closed steadily late to prevail by 3/4 length over late-running 7-2 second choice Annie Skates in 1:39.21. It was 1 3/4 lengths back to 19-1 Grace and Power third, while favorite Namaste's Wish finished fifth.

Winning owner-breeder Bob McNair of Stonerside Stable said, "I thought the way she finished there set her up perfectly for this race. She kicked home even better today than she did then. She’s got quite a kick and she showed it today.”

Winning trainer Doris Harwood said, "I couldn't be happier. This is my first Breeders' Cup and I have a wonderful filly to run tomorrow (Smarty Deb in the Grey Goose Juvenile Fillies). My horse can run from anywhere on the track. It depends on the kind of track he's running on. He's been doing really well on an off track. The rain didn't bother me or him."