On Wednesday, the eve of the 2017 Canadian Premier Yearling Sale, Woodbine Racetrack hosted "Canadian Millions Night", a series of 6 stakes races restricted to Canadian-breds who went through the Woodbine sales ring as a yearling. The race night is co-sponsored by Ontario Lottery and Gaming (OLG) and Ontario Racing with purses worth a combined $900,000. It was perfect racing weather for late August, with partly cloudy skies, minimal wind, and temperatures in the low 70's, with the main Tapeta track fast and dry, and the E.P. Taylor Turf Course rated firm (GoingStick 11.5).

The $200,000 OLG/OR Simcoe Stakes Presented by Samuel, Son and Co. Limited featured a field of eight 2-year-old males sprinting 6 1/2 furlongs on the Tapeta main track. Aheadbyacentury was the 3-2 favorite over 5-2 Ellas My Love and 7-2 Eskiminzin. Jockey Gary Boulanger sent Ellas My Love to the lead exiting the chute through fractions of 23.11 and 46.02 while pressedby 59-1 Get My Gist and stalked by 7-1 Stormfuhr. Into the lane Ellas My Love continued to lead through 3/4 in 1:10.92 but Eskiminzin, 5th early under Patrick Husbands, rallied 4 wide and outfinished fellow closer 9-1 Cooler Mike by 3/4 length in 1:17.41. It was a head back to Ellas My Love third, and 2 1/4 more to late-running favorite Aheadbyacentury fourth. 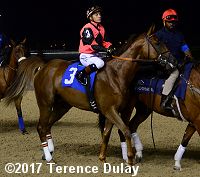 Left: Eskiminzin in the winner's circle. The Analisa Delmas trainee improved his record to 2 wins and 1 second in 3 starts, earning $136,633 for owner-breeder Jecara Farms.

Right: Second place finisher Cooler Mike in the post parade. He improved his record to 1 win and 1 second in 2 starts, earning $53,312 for owner-trainer Nick Nosowenko and co-owner Mike Nosowenko. 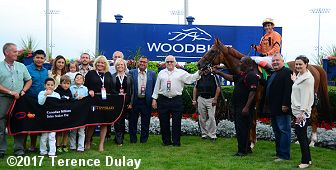 Kicking off the stakes action on Wednesday, a field of 6 older horses contested the $125,000 OLG/OR Halton Stakes Presented by Tipperary Equestrian at 1 1/2 miles on the turf. Eminent Force was thw 7-5 favorite over 7-4 Kaigun and 9-2 Johnny Bear. Jockey Jesse Campbell sent Eminent Force to the front first time by and he set fractions of 25.62, 51.72, 1:16.70, 1:40.22, and 2:03.85 while pressed by 10-1 Ethical Funds and stalked by Johnny Bear. In the stretch Ethical Funds tired as Luis Contreras sent Johnny Bear through to the lead on the inside. Kept to task by Contreras, Johnny Bear drew off late to win by 3 1/4 lengths over late-running 11-1 English Illusion. It was another length back to pacesetting favorite Eminent Force third.

Johnny Bear has won half of his eight seasonal starts and now sports a career summary reading 6-7-5 from 32 races with over $325,000 in purse earnings. He is a full brother to Breeders' Stakes winner Channel Maker.

The $125,000 OLG/OR Elgin Stakes Presented by Bear Stables featured a field of 6 older horses going 1 1/16 miles on Tapeta. Dominion Day (G3) and Seagram Cup (G3) winner Melmich was the 1-5 favorite over 5-1 Field of Courage and 12-1 Bear at Last. Jockey Rafael Hernandez sent 20-1 Star Contender to a clear lead first time by through fractions of 25.19, 50.79, and 1:14.97 while as many as 2 lengths ahead of Field of Courage second and Melmich stalking them in third. Turning for home, jockey Eurico Da Silva moved Melmich 4 wide for room and the heavy favorite gained the front through 1 mile in 1:38.76. Field of Courage attemped to close to no avail as Melmich easily held him off by 3/4 length in 1:44.97. It was a long 5 lengths back to Star Contender third.

The $125,000 OLG/OR Algoma Stakes Presented by Adena Springs Canada featured a field of 9 older fillies and mares going 1 1/16 miles. Victoriana Stakes 4th place finisher Miss Sea was the lukewarm 3-1 favorite over last year's winner 7-2 Sweater Weather and 6-1 Ellan Vannin. Jockey Patrick Husbands sent 9-1 Neshama to the lead through fractions of 25.07, 50.12, and 1:15.11 while pressed by 13-1 Spring Tempest and 8-1 Crumlin Queen. At the top of the stretch Neshama tired as Sweater Weather, 7th early under Eurico Da Silva, circled the field 4 wide to quickly open a 2 1/2 length lead through 1 mile in 1:39.41. Kept to task by Da Silva, Sweater Weather cruised to a 2 1/2 length win over late-running 13-2 Sparkles' Girl in 1:45.73. It was another 1 1/4 lengths back to late-running Ellan Vannin third.

Bred in Ontario by Osprey Stable and sold for $39,000 at the 2012 yearling sale, the six-year-old Milwaukee Brew-Susur mare surpassed the half-million dollar earnings mark with her seventh career win from 25 starts. 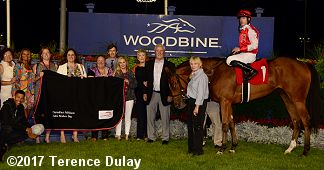 The $200,000 OLG/OR Muskoka Stakes Presented by Signature Red featured 11 two-year-old fillies sprinting 6 1/2 furlongs on Tapeta. Nandi Stakes winner Summer Sunday was the 6-5 favorite over 5-1 Hatch Gate and 7-1 Safe to Say. Jockey Jesse Campbell sent Summer Sunday to the front exiting the chute and she set fractions of 22.88 and 47.71 while pressed by 85-1 Hell N Wild and stalked by Hatch Gate. Entering the stretch, Summer Sunday left the field behind opening up by 4 lengths through 3/4 in 1:10.41. Kept to task by Campbell, Summer Sunday cruised to a 4 length win over late-running 29-1 Loopety Loo in 1:17.08. It was another 3/4 length back to 9-1 Line of Vision third.

Winning trauner Stuart Simon said, "We liked the whole package. Bill (owner, Scott) liked her pedigree and I liked her physically. She just seemed to have all the goods about her. Bill was pretty adamant about buying her."


Closing out the Canadian Millions was the $125,000 OLG/OR Kenora Stakes Presented by HBPA of Ontario featuring older horses sprinting 6 furlongs. Pink Lloyd, winner of 5 straight including the Vigil (G3), was the 1-5 favorite in the field of 6 over last year's winner 5-1 Jacks Escarpment and 9-1 River Maid. 39-1 Phil in the Blank was quickest away through an opening quarter of 22.84 before Pink Lloyd and jockey Eurico Da Silva took over through a half in 46.12 while pressed by Phil in the Blank and stalked by Jacks Escarpment. In the stretch, Pink Lloyd continued to lead through 5/8 in 57.75 with Jacks Escarpment attempting to rally by. However Pink Lloyd held him off in the final 1/16 to win by 3/4 length in 1:09.29. It was a long 4 1/4 lengths back to River Maid third.

Winning jockey Eurico Da Silva said, "He was running so relaxed today. He was a little distracted by the lights, but I knew I had horse. When the other horse (Jacks Escarpment) came to him, he kicked on. I knew it would be very hard for another horse to pass him. He galloped out really strong."