The Grade 1 Woodward Stakes is one of the major preps for the Breeders' Cup Classic. A short field of just five, after one scratch, went to the gate in this $500,000 event at 1 1/8 miles on the main track at Belmont Park. Since there were only three betting interests, only win wagering was offered on the race. Saint Liam from the Richard Dutrow barn was the obvious favorite at 2-5 over the 3-2 Nick Zito-trained entry of Sir Shackleton and Commentator. Dutrow also trained the other two entrants, the two-horse 14-1 entry of Show Boot and Crafty Player, who were sent out to assure an honest pace for the favorite.

Commentator went to the front under jockey Gary Stevens through a quarter in 23.64 but was double-teamed on the front end by Show Boot to his inside and Crafty Player to his outside. Show Boot briefly had the lead near the end of the long backstretch trip, getting the half in 45.40, but his job was complete. Rounding the turn, Saint Liam, who had settled back in fourth early, cruised out in the three path around his stablemates and grabbed the lead with 3/16 of a mile to go. Down the stretch, Sir Shackleton, who was last down the backstretch, made a late rally but was no match for the favorite. Saint Liam completed the 1 1/8 miles in an easy 1:49.07 over the fast track, winning by two lengths. It was a long 12 1/2 lengths back to Commentator in third, and a whopping 47 1/2 more to the rabbit entry.

Check out the other races on the card: the Man O'War, the Garden City, and the Gazelle Stakes. 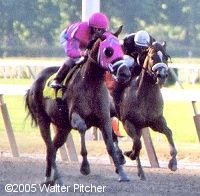 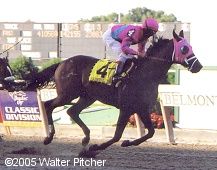 Saint Liam at the finish of the Woodward. Winning jockey Jerry Bailey said, "I don't think he needed the rabbits. You just don't want to gut him chasing a horse today with $4 million on the line six weeks from now (Breeders' Cup Classic). I knew I had Commentator going into the far turn. To be honest with your, I didn't think Sir Shackleton was the horse that could run me down any where at any point. That is as easy as you can win. I feel bad taking the money for this - but I will." 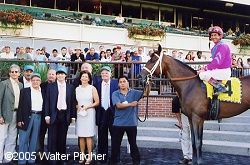 Saint Liam and his connections in the winner's circle. Winning trainer Richard Dutrow said, "It worked out to perfection. I never felt we needed these horses to kill the speed. Going into the race for his next start, I didn't want Saint Liam to get down on his belly. Last year, he put in an unbelievable race (second by a neck to eventual Horse of the Year Ghostzapper in the Woodward) and we didn't get to run him in the Breeders' Cup. This year looks different. So far, so good." Dutrow said he will train up to the Breeders' Cup Classic. 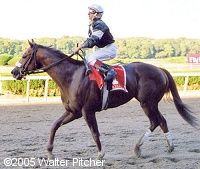 Third place finisher Commentator in the paddock before the race. His jockey Gary Stevens said, "He ran hard. They had to do what they had to do. We picked up a hell of a lot of weight. I don't know if things would have been any different without the rabbits. Of course, they were keeping me company. I could just never get my horse to relax. Saint Liam, take nothing away from him. He's a great horse."

Trainer Nick Zito said, "It would have been okay with one `rabbit.' I think two `rabbits', there is no question he (Commentator) is double-teamed. There is nothing against the rules, you run `rabbits,' you run `rabbits.' That's racing. Whether it's fair or not is something people have to judge for themselves. It's a great question. One rabbit, I think, would have been enough. He would have won anyway, with one rabbit. Both my horses ran unbelievable. Commentator is a wonderful horse. Like I said, I have to take care of him and see what happens. Saint Liam was really good today; he was in the bridle all the way."