Besides the Woodward and the Man O'War, there were two other Grade 1 events on Saturday at Belmont, both restricted to three-year-old fillies, one on the main track and one on the turf. 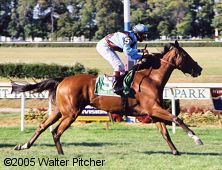 The $300,000 Garden City featured the turf specialists going 1 1/8 miles on the inner-turf. Just four fillies went to post with My Typhoon sent off as the even-money favorite over 2-1 second choice Luas Line. Jerry Bailey opened a clear lead aboard the favorite down the backstretch through a quarter in 24.32 and a half in 47.40, with Luas Line settling 1 1/2 lengths back in second just off the hedge. Turning for home, jockey John Velazquez asked Luas Line for run and got it, as the second choice easily collared the favorite with a quarter mile to go. She had an adventuresome stretch run, as she collided with a goose at about the 3/16 pole which caused her to drift slightly. 3-1 third choice Asi Siempre closed well and collared the favorite inside the 1/8 pole, but was no match for the winner, as Luas Line completed the 1 1/8 miles in a stakes record 1:45.62, and just 0.27 seconds off the course record. The margin of victory was 1 1/2 lengths over Asi Siempre, who was 3 1/4 lengths ahead of the tiring favorite My Typhoon in third. It was 5 more lengths back to 10-1 longest shot Insan Mala. 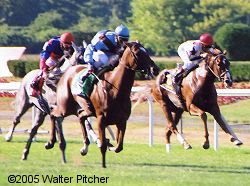 Luas Line on the outside passing My Typhoon in the stretch. Winning jockey John Velazquez said, "I was stalking Jerry (Bailey) because I didn't want to let him go too easy. The more I got closer to Jerry, the more confidence my filly had. They told me just to be careful if she takes the lead too early because she would pull up. Going to the three-sixteenths pole, we both switched leads and we went `Oh, (blank)!' We must have run over two or three geese. One of their feathers was in my foot. It was a delayed reaction. After she went through them, then she got scared." 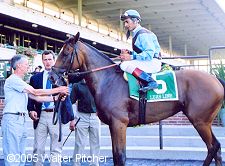 Luas Line in the winner's circle. Winning trainer David Wachman said, "She definitely has improved. I got a little fright today. I didn't know it was the geese that she hit. She pricked her ears and lost her action a little bit. It's great to come here and win a race. She likes the fast ground and she travels well. We'll see about the Breeders' Cup (October 29th, Belmont Park). I'll have to talk to the owners and see what they want to do." 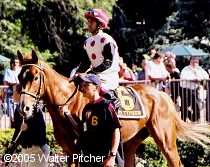 Beaten favorite and third place finisher My Typhoon before the race. Her jockey Jerry Bailey said, "I knew I was going to be there (on the lead), but she ran off. I couldn't get her settled. That's definite in turf racing." 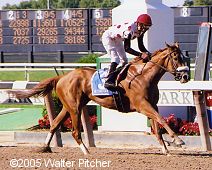 Just five fillies went to post in the $250,000 Gazelle at 1 1/8 miles on the man track, with Leave Me Alone sent off as the even-money favorite over 2-1 second choice In The Gold. The favorite set the early pace of 46.67 and 1:10.94 while under pressure by 5-1 shot Yolanda B. Too. Turning for home, In The Gold, who had stalked the pace in third down the backstretch, advanced three wide and collared the leaders with a furlong to go. Under steady urging by jockey Gary Stevens, In The Gold drew away to a 2 1/4 length win in a time of 1:49.75 over Leave Me Alone, who was a length ahead of Yolanda B. Too in third.

Gary Stevens and In The Gold after winning the race. Stevens said, "She was a completely different filly today. Nick (Zito) told me she had been 'in season' for a long time. She's not now. Warming up, she was very aggressive. Today, she broke sharp and just took me around there. I was very confident." 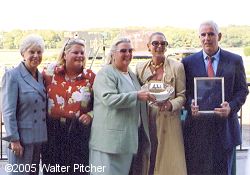 The trophy presentation for the Gazelle. Winning trainer Nick Zito (on the right) said, "I will probably tell miss (Charlotte) Weber that if we take a shot at the Breeders' Cup, maybe we should go all the way and train her up to it (Breeders' Cup Distaff, October 29th, Belmont Park) If I wanted another race, I would probably have to run her against older horses. But she might really be coming around now, so I would like to try it that way -- going in fresh with no other prep." 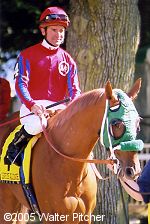 Second place finisher and beaten favorite Leave Me Alone before the race. Her trainer Eric Kruljac said, "She didn't have the same turn of foot; it was a different track today and a different race than the Test. She was a little rank in the holding barn. Kent (Desormeaux) said the track was heavy and laboring. She plugged away all the way to the 1/8 pole, but just couldn't answer Nick's horse. We'll ship her back to Santa Anita."

Her jockey Kent Desormeaux said, "The track was a little too asking today. With her style, she might even prefer two turns. She really ran good. You can see what happened to the ones that tried to entertain her. That's an indication of how hard she tried."