The Grade 1 Man O'War Stakes at 1 3/8 miles over the Widener Turf Course at Belmont Park is a major prep for the John Deere Breeders' Cup Turf. Eleven older horses, including one filly, went to the gate in this $500,000 event with last year's Breeders' Cup Turf winner Better Talk Now the lukewarm 3-1 favorite. He was coupled in the wagering with stablemate Shake The Bank who was entered as a rabbit to insure an honest pace. Also in the field were 7-2 second choice Relaxed Gesture and 4-1 third choice King's Drama.

As expected, jockey Tommy Turner sent Shake the Bank straight to the front for trainer H. Graham Motion, pulling away from the field by eight lengths down the backstretch through a half in 47.21 and 3/4 in 1:11.18 over the firm going. Relaxed Gesture did not take the bait, settling in second but not contesting the obvious rabbit with King's Drama another 2 lengths behind him. Better Talk Now and jockey Ramon Dominguez was unhurried near the back of the pack for the long backstretch trip. After completing a mile in 1:35.94, Shake The Bank tired badly and backed up through the pack, allowing Relaxed Gesture to inherit the lead with a furlong to go after 1 1/4 miles in 1:59.67. However, Better Talk Now was closing with a rush after circling the field three-wide around the turn. In the final strides, Better Talk Now got to the front just in time, putting his neck in front of King's Drama to finish the distance in 2:11.65, tying the stakes record. It was just 1/2 a length back to Relaxed Gesture in third, and 4 1/4 lengths more back to 8-1 shot Vangelis in fourth.

Check out the other races on the card: the Woodward, the Garden City, and the Gazelle Stakes. 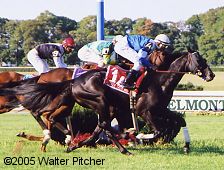 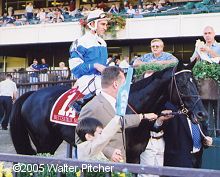 Better Talk Now takes his walk down Victory Lane to the winner's circle. Winning trainer H. Graham Motion said, "I think that in the Breeders' Cup, there will be a legitimate pace. It's amazing to me how little respect this horse gets. I don't think any horse in any division has accomplished in the last year what he has. Ramon (Dominguez) has the utmost confidence in this horse. He's not an easy horse to ride. I think he's getting better, to be honest. This was the perfect prep. He does well with time between his races. Knock on wood, we can keep him sound. My dream has always been to get him back to the Breeders' Cup." Better Talk Now apparently was not 100% going into the race due to a cracked hoof. Motion explained, "We had trouble with one of Better Talk Now's hooves. My blacksmith has been working on him for three days, and put a patch on him." 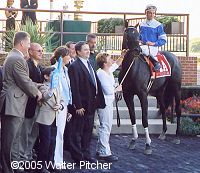 Better Talk Now in the winner's circle. Winning jockey Ramon Dominguez said, "I had a really great trip. Once I got him clear down the lane, he was very determined to win. I'm not going to say I knew he was going to win by many; I just felt confident enough that he was going to get the job done. I kept him together. He was very determined today. It was nice winning on a course like this because some people said he couldn't win on firm ground. The turf is very firm." 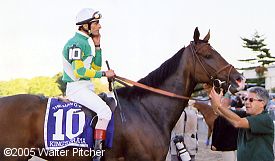 Second place finisher King's Drama after the race. His jockey John Velazquez said, "I thought I had a perfect trip. When I asked him, he responded and gave me good run. His horse was just a tiny both better than mine today." 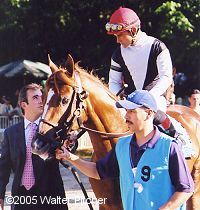 Third place finisher Relaxed Gesture before the race. His trainer Christophe Clement said, "The race didn't unfold the way I thought it would unfold. I thought we would be sitting behind King's Drama and make one late run. We wound up leading the second group. The jockey said the horse was very comfortable. The horse didn't quit, we just got out-finished by the other two horses. The time of the race was very good." Clement said that Relaxed Gesture may go next in the Breeders' Cup Turf.

His jockey Corey Nakatani said, "He ran a big race. I was a little more forward than I would have liked to be, but he was cruising and just in a high gallop. I told Chris (Clement, trainer) to keep him going toward the Breeders' Cup."