The major New York prep race for the Triple Crown is the $1 million Wood Memorial Stakes (G1), contested at 1 1/8 miles, one complete circuit of the Aqueduct main track, worth 100 points to the winner under the Road to the Kentucky Derby. A field of 10 three-year-olds went to post on Saturday afternoon, before a crowd of 12,119 enjoying clear skies and temperatures in the high 40's. As expected, undefeated Verrazano was sent off as the 4-5 favorite off his win in the Tampa Bay Derby (G3). In to challenge him included 3-1 second choice and also undefeated Vyjack, winner of both the Jerome (G2) and Gotham (G3), and 7-2 third choice Normandy Invasion, fifth in the Risen Star (G2) after a close second in the Remsen (G2).

Jockey Jose Lezcano sent 77-1 Chrisandthecapper to the lead first time past the stands and he set slow early fractions of 24.89 and 49.62 while 2 lengths in front of Verrazano stalking to his outside. Midway down the backstretch jockey John Velazquez asked Verrazano to pick up the pace and he easily took over the lead through 3/4 in 1:13.74. Vyjack, fourth early, put in a charge in upper stretch getting to within a length of Verrazano through a mile in 1:37.72, but Verrazano kept his lead intact. Normandy Invasion, 6th early, rallied late but Verrazano finished 3/4 length in front in 1:50.27. It was just a neck back to Vyjack third.

A stewards' inquiry into the start found that the assistant starter in post 10 held on to Freedom Child impeding his exit from the gate, so he was declared a non-starter. He trailed the field immediately, got within 2 1/2 lengths of Verrazano on the clubhouse turn, but tired late to finish last. 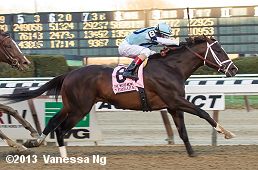 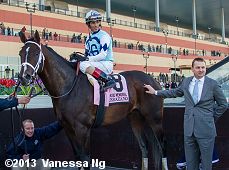 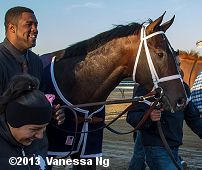 Left: Verrazano in the winner's circle. Bryan Sullivan of ownership group Let's Go Stable said, "It feels great. We had never won a Grade 1 for Let's Go. I'm so happy for Kevin (Scatuorchio) and all our investors. The race was a little weird. They really walked the dog. I think our horse is better when he's put into the race earlier. He's got an incredibly high cruising speed and he kind of puts horses away. It almost set up like a turf race; then, all of a sudden, it was a sprint home. He still hung in and dug and fought. I'm glad he got a fight. We're happy to move forward. Anything can happen at Churchill but this kind of validates us."

Right: Verrazano heads back to the barn after the race. Trainer Todd Pletcher said, "He made kind of a quick move on the turn, and then idled a little bit, and made another quick move and idled a bit, which he has a tendency to do, but a very good effort. This race was not only a building block but a very significant race in its own right. He didn't show me anything to say he won't go 1 1/4 miles. He's gone 1 mile, 1 1/16, 1 1/8 now and handled each one. He's got to go to Churchill and he's got to train well over that surface. If it's the surface we saw at the Breeders' Cup a couple of years ago, there might be no one that handles it. That's the real key. We've got a new track superintendent there; hopefully we get a good honest surface there." 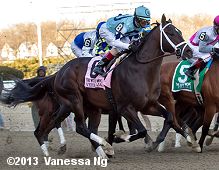 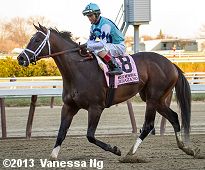 Left: Verrazano shortly after the start. Jockey John Velazquez said, "He's running good enough that I don't have to hit him. There was nobody on the outside, and by the wire I looked and (Normandy Invasion) came, and I never even saw that horse. I thought Vyjack was the only one fighting me. So I went to hand-ride him and show him the whip and tried to keep his attention because I know he kind of waits, and he's looking at the infield, and I just kind of got his attention. And all of a sudden (Normandy Invasion) got close at the wire and I never saw him. I didn't hit (Verrazano). I didn't want to overdo things."

Right: Verrazano returns after the race. 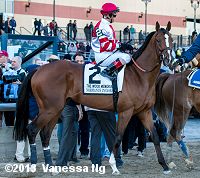 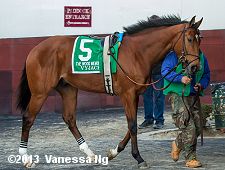 Left: Second place finisher Normandy Invasion heads out for the post parade. Trainer Chad Brown said, "I'm very grateful he got up for second, got the points, hopefully, to get into the Derby. I don't see any reason why 1 1/4 miles third off the layoff shouldn't really hit him between the eyes. My main concern was that he gets out of the gate cleaner, and I thought he did. He's never going to be a horse who is going to flash early speed, but given how sharp he has been working, he's a horse who can at least adapt to a slow pace. There's no reason why he should be far off a slow pace. Javier allowed him to adapt today by warming him up good and giving him a good, patient ride on the inside. He waited for his seam, got it, and he was second best. With another race under his belt, a little added distance, and some racing luck in the Derby, hopefully it will be his turn to get his nose on the line." He will ship to Churchill on April 14.

Right: Third place finisher Vyjack in the paddock. Jockey Joel Rosario said, "It was a different race than the Gotham. He ran well. Remember, (Verrazano) is a good horse, too. We were rolling turning for home, but (Verrazano) had an easier trip than I had. I had a good trip, but he probably wanted a little more speed. They were rolling turning for home. He gave me everything he had." Trainer Rudy Rodriguez said on Sunday, "He came back good, he ate good, he walked good this morning. There was some mucus when we scoped him, nothing bad. I don't want to use that as an excuse. I'm proud of the way he ran. It's like human beings, we get a little cold for a couple of days. We'll clean it up, we'll check him out again, and move forward. He ran a good race against a good horse." 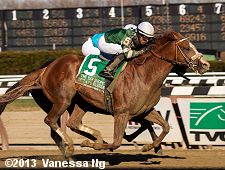 The $250,000 Bay Shore Stakes (G3) featured a field of nine 3-year-olds sprinting 7 furlongs on the main track. Fred Capossela Stakes winner Maleeh was sent off as the 5-2 favorite over 3-1 second choice Clearly Now, winner of the Swale (G3), and 4-1 third choice Honorable Dillon, a distant 7th in the Tampa Bay Derby (G2) after winning the Hutcheson (G2). 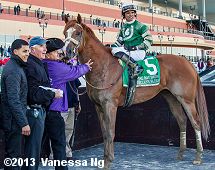 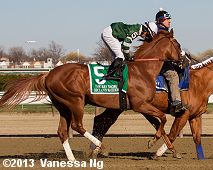 Left: Declan's Warrior heads to the winner's circle. Winning trainer Nick Zito said, "First time he ran, breaking his maiden at Belmont, that's how he came. He came with a run. I told Jose, don't take him out of his game, because that's a no-no. We've done that since we were kids, you know, you take a horse out their game, and it never works. In this particular situation, it worked out. The speed got going, and he got going in the end. My wife Kim is the principal owner, as you know, so it's a special day for us. She loves her horses. She keeps telling me, the ones that we breed, you have to give them good homes, don't put them in claiming races. I guess there should be more people like her. On the other hand, I'm glad this worked out and the people that stuck by me, I'm happy for them."

Right: Declan's Warrior in the post parade. Jockey Jose Lezcano said, "I was a little worried because there was so much speed to today, but I had to ride my horse the way he wants to run – let him sit and try to catch them at the end. He did it. When I asked him the last part he really kicked good and won the race." Zito added he may go next in the Derby Trial, Preakness Stakes, or Woody Stephens Stakes. 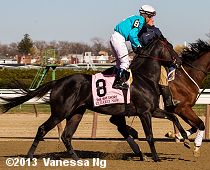 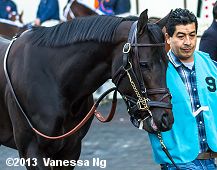 Left: Second place finisher Clearly Now in the post parade. The 3-1 second choice stalked the pace in third under jockey Javier Castellano, gained the lead at the 3/16 but could not hold off the winner. The Brian Lynch trainee improved his record to 3 wins 1 second, and 2 thirds in 6 starts, earning $264,598 for owner Up Hill Stable.

Right: Third place finisher The Truth and K G in the paddock. The 13-1 shot raced 6th 3 lengths off the pace under jockey Jose Ortiz, then passed tired horses to get third beaten 3 lengths. The Rudy Rodriguez trainee improved his record to 3 wins, 2 seconds, and 1 third in 7 starts, earning $137,240 for owner James Riccio. 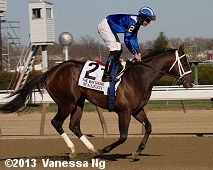 Sixth place finisher and beaten favorite Maleeh in the post parade. The previously unbeaten colt by Indian Charlie now has a career record of 3 starts and 2 wins with $97,250 in earnings.

On to the Carter Handicap, Ruffian Handicap and Gazelle Stakes also on the card.