There were 5 graded stakes races run over the Aqueduct main track on Saturday before the crowd of 12,119. The other Grade 1 event on Wood Memorial day is the $400,000 Carter Handicap (G1), a 7 furlong sprint for older horses and an early prep for the Breeders' Cup Sprint (G1). Gulfstream Park Handicap (G2) winner Discreet Dancer was sent off as the even-money favorite over 9-5 second choice Sahara Sky, winner of the Palos Verdes (G2) and San Carlos (G2) at Santa Anita, and 6-1 third choice Fort Loudon, third in the Gulfstream Park Handicap after winning the Gulfstream Sprint Championship (G3).

Jockey Eddie Castro sent 26-1 longest shot Consortium to the lead exiting the chute through fractions of 22.17 and 44.63 while stalked by 7-1 Brigand and Discreet Dancer. On the turn, 16-1 Swagger Jack, 5th early, moved up to challenge for the lead, getting 3/4 in 1:09.79. Sahara Sky closed from 6th but Swagger Jack held him off by 3/4 length in 1:21.44 over the fast main track. It was another length back to Discreet Dancer third. 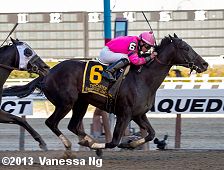 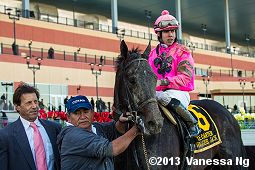 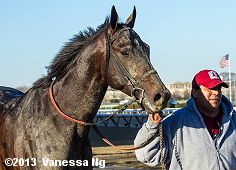 Left: Swagger Jack in the winner's circle. Winning trainer Marty Wolfson said, "I was very confident in this horse. He should have won the Gulfstream Sprint Championship, but he got left at the start. And then in his last race, Fort Larned stumbled at the start and Discreet Dancer was left alone on the lead. I was confident there was enough speed in today's race that he'd be able to make a run."

Right: Swagger Jack heads back to the barns after the race. 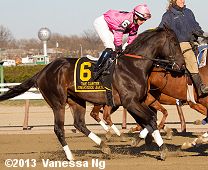 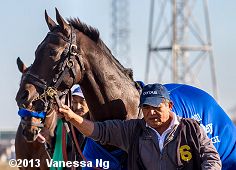 Right: Swagger Jack heads over to the paddock before the race. Jockey Irad Ortiz Jr. said, "I just tried to follow the instructions the trainer told me. Everything he told me happened in the race. He told me to break four, five lengths behind the speed and let the speed go. Maybe three horses had speed and I was sitting behind them. At the three-eighths pole, that horse loves to go, so that's what I did, and he started to pick them up pretty quick. It feels great." 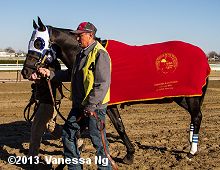 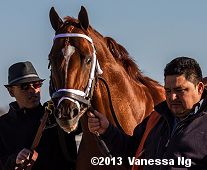 Left: Second place finisher Sahara Sky comes over from the barns before the race. Jockey Joel Rosario said, "He was fine. That's how he likes to run, a little far back. He was closing at the end. Too bad we couldn't catch the winner; we were second best."

Right: Third place finisher and beaten favorite Discreet Dancer comes over from the barns before the race. Trainer Todd Pletcher said, I thought we got the trip we expected. He had a good stalking position.Turning for home he had a big chance and then ran kind of evenly down the lane." Jockey Javier Castellano added, "He just ran kind of evenly. I tried to stalk the pacesetter. He was feeling good around the turn but turning for home he just kind of stayed even." 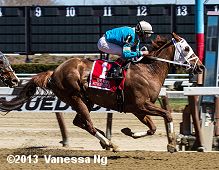 The first stakes race on Saturday was the $250,000 Ruffian Handicap (G2) for older fillies and mares going 1 mile. Barbara Fritchie Handicap (G2) runner-up My Wandy's Girl was sent off as the 4-5 favorite in the field of 5 over 5-2 Twice the Lady, second in the Top Flight Handicap (G3) last out, and 5-1 Onepointhreekarats, seventh in the Fritchie after winning the Thirty Eight Go Go Stakes. 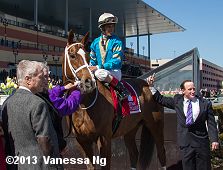 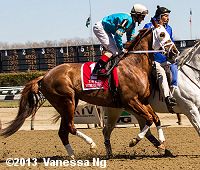 Left: Withgreatpleasure in the winner's circle. Trainer David Ninn, celebrating his first graded stakes win, said, "She was my first stakes winner, now she's my first graded stakes winner. She's been second in a Grade 2, third in a Grade 2, she's done everything. She was due to finally get a trip and win. I take nothing away from the other jocks, they have done a wonderful job, but Johnny V knows Aqueduct, and that made a difference today. She has taken me to places I have never been. I cannot say enough about her. I blew her out 3/8 mile the other day and I let her make the call. It was very impressive. I was going to go to Charles Town for a race on April 20th. I had no intention of running here."

Right: Withgreatpleasure in the post parade. Jockey John Velazquez said, "I just waited and waited. Past the 3/8 pole, it was my chance to get her there. I got there maybe a little too soon, but I got there, anyway. I had to take the chance when it was open. I didn't want to wait and have (Juan Vargas aboard Funnys Approval) see me there and close the hole on me, so I took the chance to move her there, and she lasted. She was going well the whole way to the 1/16 pole. She started getting tired the last 20 yards, but I had to make the early move." 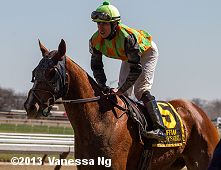 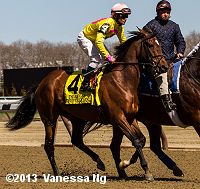 Left: Second place finisher and beaten favorite My Wandy's Girl returns after the race. Trainer Mike Hushion said, "I thought she ran well, considering she ran farther than anyone else. She seemed to come back fine, and we'll look around for what's next." 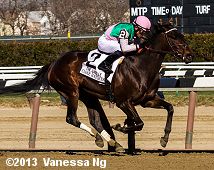 The filly counterpart to the Wood is the $250,000 Gazelle Stakes (G2) for 3-year-old fillies, also contested at 1 1/8 miles, and earns the winner 100 points on the Road to the Kentucky Oaks. Close Hatches, undefeated in two starts and making her stakes debut, was sent off as the 5-4 favorite in the field of 6 over 3-2 second choice Princess of Sylmar, winner of the Busher Stakes and Busanda Stakes, and 7-2 third choice Walkwithapurpose, winner of the Caesar's Wish/

Jockey Joel Rosaro sent Close Hatches to the lead immediately and she set fractions of 24.23, 47.47, and 1:10.95 while stalked by Walkwithapurpose. Into the stretch, Princess of Sylmar closed from 4th to draw even with the pacesetter, but Close Hatches found another gear and drew off to a 3 1/4 length win in 1:50.53. It was another 3 3/4 lengths back to Walkwithapurpose third. 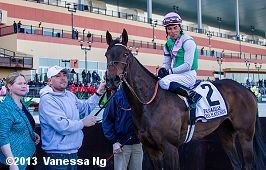 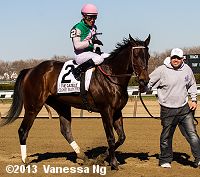 Left: Close Hatches in the winner's circle. Winning trainer Bill Mott said, "She showed a lot of courage, is what she showed. She went to eyeball-to-eyeball with a horse that has a lot of experience, who developed a pretty good record over the course of the winter here and won several stakes. I think for a third start and first time in stakes company, she ran very, very well. We'll discuss her next start with the racing manager and the owner. The Kentucky Oaks is certainly a possibility."

Right: Close Hatches returns after the race. Jockey Joel Rosario said, "My horse broke well out of the gate, and she found herself on the lead. I was fairly confident the whole way. I just had to keep her relaxed and hope she had something left when she turned for home. She's a young filly, and it's only the second time she's gone long, so it looks like she has a future." 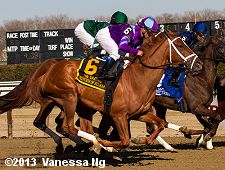 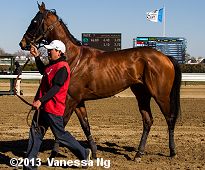 Left: Second place finisher Princess of Sylmar shortly after the start. The 3-2 second choice raced in fourth early under just Javier Castellano, challenged for the lead but was second best. The Todd Pletcher trainee improved her recod to 4 wins, 1 second, and 0 thirds in 6 starts, earning $238,220 for owner King of Prussia Stable.

Right: Third place finisher Walkwithapurpose heads to the paddock before the race. The 7-2 third choice stalked the pace under jockey Jeremy Rose but tired late to finish third beaten 7 lengths. The Ignacio Correas trainee improved her record to 5 wins, 0 seconds, and 2 thirds in 7 starts, earning $297,210 for owner-breeder Sagamore Farm.