The highlight of the Aqueduct spring meeting is the $750,000 Wood Memorial Stakes (G1), a major prep for the Kentucky Derby, contested at 1 1/8 miles, one complete circuit of the main track. A compact field of just 6 went to post on Saturday afternoon before 8,553 fans under cloudy skies with temperatures in the mid 60's. As expected, Eskendereya was sent off as the 1-2 favorite off two straight victories at Gulfstream, an allowance in January and the Fountain of Youth in February by 8 1/2 lengths. In to challenge him included 5-2 second choice Awesome Act, winner of the Gotham last time out, and 7-1 third choice Jackson Bend, second in both the Holy Bull and the Fountain of Youth.

69-1 longest shot Most Happy Fella was sent to the lead early by jockey Rosie Napravnik and he battled with Jackson Bend through slow fractions of 24.32, 49.21, and 1:13.54 over the fast track, with Eskendereya sitting another length back in third. Entering the stretch, Most Happy Fella tired as Eskendereya came out for room and cruised to the lead at the 3/16 pole. Awesome Act, who stumbled at the start, put in a bid of his own after racing last early, but Eskendereya was long gone. Eskendereya got the mile in 1:37.73 and drew off through the final furlong to win by 9 3/4 lengths in 1:49.97. Jackson Bend outfinished Awesome Act late to get second place by a head. 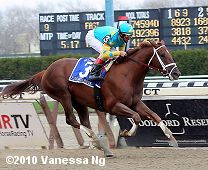 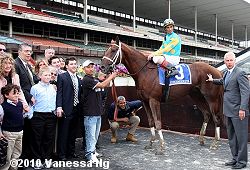 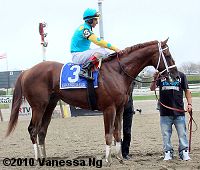 Left: Eskendereya in the winner's circle with trainer Todd Pletcher at his hip. Pletcher said, "The further he goes, the stronger he gets. He's a horse that has natural stamina. It would be big to win the Derby. We'll try to make that happen. We've never had a horse we knew could handle 1 1/4 miles and we've never had one put together a couple of preps like this one. We've had some good prep wins, but none as impressive as these two. He goes back to Palm Meadows tomorrow and will stay there for a couple of weeks and hopefully ship to Louisville on the 20th."

Right: Eskendereya returns after the race. 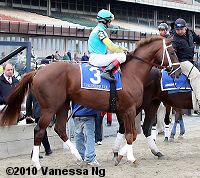 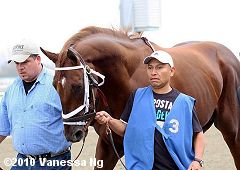 Left: Eskendereya heads out for the post parade. His jockey John Velazquez said, "This is the kind of horse where you hold him together and let him go when you want to and he responds the right way. Today, he was more kind the first part of the race. He allowed me to get him back off the slow pace, and once I did that I got into the clear on the backstretch and he settled really, really well until (Awesome Act) came to him on the outside on the backstretch. I gave him his head a little bit then, and he settled. Once we got to the 3/8 pole he got on the bridle pretty strong and when I gave him his head he just went up and up and up from the horses. He was just galloping. It was a good feeling."

Right: Eskendereya comes over from the barns before the race. Trainer Todd Pletcher said, "He ran as well as he did in the Fountain of Youth. The thing that Johnny did today was take pretty good care of him from the 1/8 pole to the wire. There was more there than what we saw, even as impressive as it was. He's not at the mercy of anyone's pace. He sets his own pace. We just wanted him in his rhythm. I thought he settled very well today. In the Fountain of Youth, Johnny thought maybe he could have settled a little more. Today, he couldn't have been more professional." 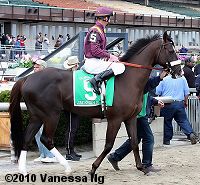 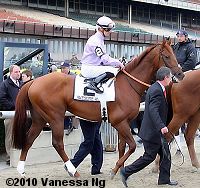 Left: Second place finisher Jackson Bend heads out for the post parade. His trainer Nick Zito said, "These guys have to run against Muhammad Ali (referring to Eskendereya). That's Smokin' Joe Frazier (referring to Jackson Bend). He won't give up. For Jackson Bend, you cannot give him enough credit. I am very proud of him. I am very happy. We're going to take him to Kentucky and see what happens. Kentucky is a place for a horse to get good. No one can say that this horse doesn't belong there. Nobody. One thing we do know - Eskendereya is in a class by himself." His jockey Calvin Borel added, "I thought he ran a super race. He keeps trying. That's the kind of horse that you want in the big races. I thought we had a chance to win it, but we just got outrun. So many things can happen in the Derby. Anything can happen with 5 or 6 horses. When you have 20 horses in a race, a lot of things can happen, you cannot get everything your own way."

Right: Third place finisher Awesome Act heads out for the post parade. His trainer Jeremy Noseda said, "My horse was not suited by the pace. It was a great performance by the winner, but for my horse the pace was wrong. He lost a shoe coming out of the gate, which didn't help. We'll move on to Kentucky and go from there." 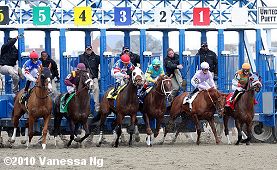 The start of the Wood Memorial showing how Awesome Act broke badly. His jockey Julien Leparoux said, "There was no pace. He got a little rank. I think he lost a shoe coming out of the gate. I think we still have a good chance in Kentucky. With more pace, he can relax better." The next morning, Noseda's assistant Wayne Tanner said, "We'll train here until about five days before the Derby, then ship down to Kentucky. He's come out of it well. He couldn't wait to get into his grub last night. He's a very relaxed horse and about the only thing that gets him going is the sound of his feed being poured into the bin. We'll let him have an easy couple of days and move on from there." 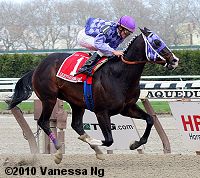 Kicking off the stakes action on Wood Memorial day was the $200,000 Bay Shore Stakes (G3) for 3-year-olds sprinting 7 furlongs on the main track. Eightyfiveinafifty, who broke his maiden by 17 lengths but bolted and did not finish in the Whirlaway last out, was sent off as the 3-5 favorite in the field of 6 over 3-1 second choice Hurricane Ike, shipping in from Santa Anita where he was second in the Jack Goodman Stakes in October followed by a third place effort in an allowance in March, and 4-1 third choice Raynick's Jet, making his stakes debut after an allowance win last out.

As expected, Eightyfiveinafifty went to the lead exiting the chute and battled with Hurricane Ike through an opening quarter of 22.67 and a half in 45.01. Entering the stretch, jockey Ramon Dominguez asked the favorite to draw clear and he did so, opening up through the drive to win going away by 2 1/2 lengths in 1:21.89. It was another 2 1/2 lengths back from Hurricane Ike to 11-1 Remand third. 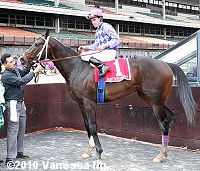 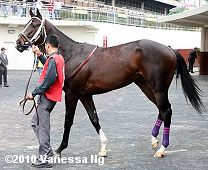 Left: Eightyfiveinafifty in the winner's circle. His owner Harold Lerner said, "Ramon said everything was OK and we got to the wire first, that's what counts. 21 and change, 45 and change - he's got an engine. He's a really nice racehorse. The next race may be the Derby Trial. Perhaps, then, the Preakness. The big dance (Kentucky Derby)? We're not ruling that out. One thing at a time. We don't want to get too far ahead of ourselves."

Right: Eightyfiveinafifty in the paddock before the race. His jockey Ramon Dominguez said, "He's a big horse with a big stride. It didn't feel as if he was going in 1:08, but that's the way it is with the good ones. I had no problem with him." 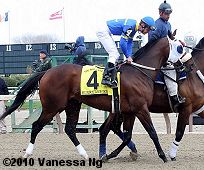 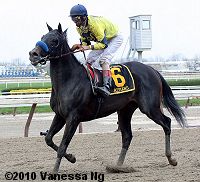 Left: Second place finisher Hurricane Ike in the post parade. His jockey Calvin Borel said, "I thought he ran a huge race coming off of those races on the synthetic tracks. I knew Eightyfiveinafifty was the horse to beat. Going down the backstretch, I saw Eightyfiveinafifty's head was turned, but I knew Ramon had control of him. Coming for home, I thought we had a chance to get him, but my horse got a little bit tired in the end."

Right: Third place finisher Remand returns after the race. The 11-1 shot was checked at the start, raced within 3 lengths of the pace under new jockey John Velazquez, then passed tiring horses late to get third beaten 5 lengths. The John Terranova trainee improved his record to 1 win, 0 seconds, and 1 third in 3 starts, earning $50,370 for owner Sovereign Stable.