The last stakes race on Wood Memorial day was the $250,000 Carter Handicap (G1), with a field of 6 older sprinters going 7 furlongs on the main track. Munnings was sent off as the 5-4 favorite off a win in the Gulfstream Park Sprint Championship, after finishing third in the Vosburgh last October. In to challenge him included 7-4 second choice Musket Man, winner of the Super Stakes at Tampa Bay last out, and 7-2 third choice Warrior's Reward off an allowance win at Gulfstream.

Exiting the chute, 8-1 Digger went to the lead and was stalked to his outside by 18-1 longest shot Elusive Warning through opening fractions of 22.85 and 45.92 over the fast track. Munnings sat in midpack fourth early. Entering the stretch, Musket Man came through between horses to get a short lead at the 1/8 pole through 3/4 in 1:09.63, but Warrior's Reward, last early, closed down the center of the track to nail Musket Man in the final stride to get the win in a photo finish, completing the trip in 1:21.62. It was a long 4 1/2 lengths back to favorite Munnings third. 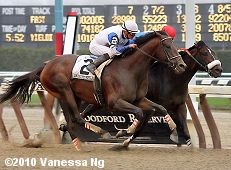 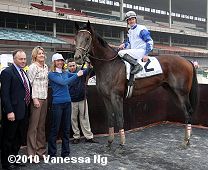 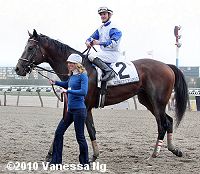 Warrior's Reward in the winner's circle with trainer Ian Wilkes on the far left. Wilkes said, "After he couldn't get the distance in the Travers, we decided, let's make him a one-turn horse, 7/8 or a mile. Let's make him a really good horse. He wants to be a good horse. When Julien pulled him to the outside, I knew he had a lot of horse and I know what this horse can do. I actually felt really good when he came around the turn and was just traveling so easy. He needs to relax and stay off the pace a little bit, that's where his strength is."

Right: Warrior's Reward circles before going to the winner's circle. 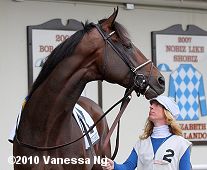 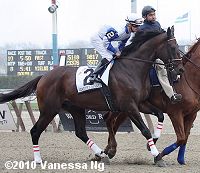 Left: Warrior's Reward in the paddock before the race.

Right: Warrior's Reward in the post parade. His jockey Julien Leparoux said, "This is a horse that needs to be relaxed and he relaxed very well today. I moved up on the turn just to get a little position and he just dragged me all the way to the front. He's a real nice 7/8 to a mile horse and I think one turn will be best. (Musket Man) ran a great race, too. He's a really good horse and so is mine and I think we're going to have a lot of fun this year." 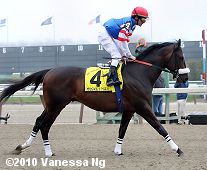 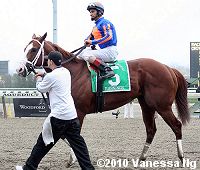 Left: Second place finisher Musket Man in the post parade. His trainer Derek Ryan said, "I don't want to see another photograph. There was nothing that we could do. It's a tough beat. We'll probably bring him to Churchill Downs, then to Belmont for the Met Mile before we give him a rest for the summer." Jockey Ramon Dominguez added, "He dug in when the other horse came to him. He switched back to his left lead a few strides before the wire; I don't know if that cost him any momentum or not. But overall, I'm pleased with the way he ran. He was very game."

Right: Third place finisher and beaten favorite Munnings returns after the race. His trainer Todd Pletcher said, "It was a decent race. He was in contention coming into the stretch. He just got outrun and the other two finishers were better here." Jockey John Velazquez added, "He just didn't finish the way I thought he would. He was going very well around the turn. But when I asked him, he only had a little run. He didn't finish the way I thought he would." 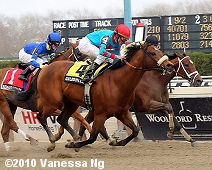 The $200,000 Excelsior Stakes (G3) features older horses going 1 1/8 miles on the main track. Nite Light was sent off as the 7-5 favorite in the field of 5, off a third place finish in the Stymie in March and winless since September. In to challenge him included 3-2 second choice Goldsville, an allowance winner last out after finishing fifth in the San Pasqual Handicap at Santa Anita, and 9-2 third choice More Than a Reason, an allowance winner last out after finishing 5th in the Stymie.

Jockey Channing Hill sent 5-1 fourth choice Seniors Pride to the lead early and he set early fractions of 24.35, 49.20, and 1:13.79 while a length in front of Goldsville stalking him in second. Entering the stretch, Goldsville surged to the front getting 1 mile in 1:38.07. Nite Light, who raced in third early, came through along the rail, but Goldsville edged clear late to win by 3/4 length in 1:51.43. It was just a neck back from Nite Light to Seniors Pride third, and another neck to More Than A Reason fourth. 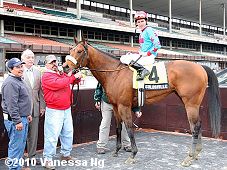 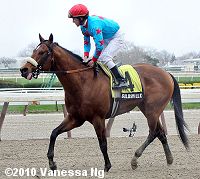 Left: Goldsville in the winner's circle. His trainer Mike Hushion said, "Getting 1 1/8 miles for the first time was a relief. He held them safe. I can't say I wasn't nervous. There's a reason my teeth are half the size, from grinding them down. After the allowance win, this was the obvious race, the next step. We've gotten quite a few from California. This owner, Marc Ferrell, has sent 4 or 5 to us. This horse had his dirt form with Bill Mott."

Right: Goldsville returns after the race. His jockey Ramon Dominguez said, "We were able to get in good position with very comfortable fractions. He was very tough today, especially in the stretch. He really tried hard. Today, he ran the same way as he did a few weeks ago when I was riding him for the first time. He just settled behind the pace then took the lead. This horse continues to improve." 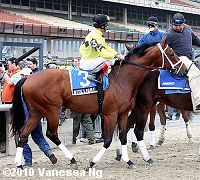 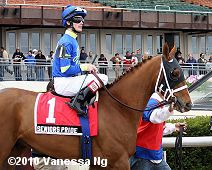 Left: Second place finisher and beaten favorite Nite Light heads out for the post parade. His trainer Todd Pletcher said, "It was kind of what we were afraid of; 1 1/8 is just not his best distance. He finished up well. He just ran out of ground." Jockey John Velazquez added, "He had plenty of time, but he didn't run until the last leg of the race. This isn't his best distance."

Right: Third place finisher Seniors Pride heads out for the post parade. The 5-1 fourth choice sprinted clear on the rail under jockey Channing Hill to set the pace for 7/8 mile, battled to the 1/8 pole and yielded late to get third beaten 1 length. The Mike Tannuzzo trainee improved his record to 3 wins, 3 seconds, and 3 thirds in 14 starts, earning $97,285 for owner Jill Pecoraro.