The feature race on Sunday at Saratoga was the $350,000 Alfred G. Vanderbilt Handicap (G1), one of the premier races for older sprinters on the east coast. A field of 8 went to post in this 6 furlong main track event under sunny skies and temperatures in the mid 70's. Limousine Liberal was sent off as the 8-5 favorite in the field of 7 off a 3 race win streak including the Churchill Downs (G2), Aristides (G3), and Kelly's Landing all at Churchill Downs. In to challenge him included 2-1 second choice Bird Song, 8th in the Stephen Foster (G1) after winning the Alysheba (G2), and 5-2 third choice El Deal, winne of the Decathlon Stakes at Monmouth.

Jockey Javier Castellano sent El Deal to the lead exiting the chute and he set fractions of 22.50 and 45.28 while pressed by 27-1 Green Gratto and stalked by Limousine Liberal. Entering the stretch El Deal left the field in his wake, opening up a 6 length lead through 5/8 in 57.03. Kept to task by Castellano, he cruised to win by 8 lengths over late-running 11-1 Awesome Banner in 1:09.26 over the fast main track. It was a head back to favorite Limousine Liberal third.

The Jim Dandy and Amsterdam Stakes also on the card 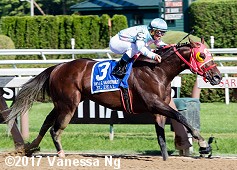 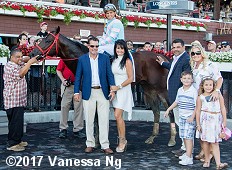 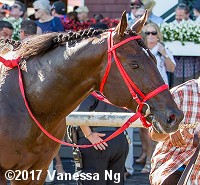 Left: El Deal in the winner's circle. Winning trainer Jorge Navarro said, "I respect all the horses in the race. That's why we were here: to see what kind of horse he is. I think I did the right thing by taking him to all those (previous) tracks and prepping him there. I called the owners and said I thought it was time to see what we have and he proved it. When I saw the fifth race [on a fast track], I said 'we're good.' I knew how fast he is and I knew that he carries his speed really good. We'll see what's next for him. He likes a break of 45-50 days, so that's what he'll get. We're getting ready for the Breeders' Cup and big races at the end of the year, so I wanted owners to have fun. I called them up and said I thought it was time to see what he's about. I guess he is what he is."

Right: El Deal heads back to the barn after the race. Winning jockey Javier Castellano said, "He's a fast horse and I took advantage. Jorge Navarro did a great job. I never rode the horse before. He told me break out of the gate and don't look back. [He said] try to put him in the lead and don't look back and let him roll. That's his style. He's one dimensional. I followed the instructions and just enjoyed the ride. It wasn't too fast. I tried to slow down a little bit. Maybe everybody thought it would go a little quick. I just bore down a little bit and used my best strategy for that race and it work great and it paid off." 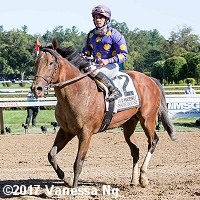 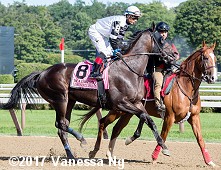 Left: Second place finisher Awesome Banner returns after the race. Jockey Jose Lezcano said, "He broke good. I think when the dirt started hitting him in the face, he started backing up a little bit in the middle. I never rode him before. He kept running a little bit past the wire, but I think without backing up in the middle, since he wasn't three or four lengths closer, he wasn't going to be the winner."


The $250,000 Bowling Green Stakes (G2) featured a field of 7 older horses going 1 3/8 miles around 3 turns of the inner turf course. Ascend was sent off as the 7-4 favorite off his win in the Manhattan (G1). In to challenge him included 5-2 second choice Sadler's Joy, third in the Manhattan, and 15-4 third choice Bigger Picture, winner of the United Nations (G1). 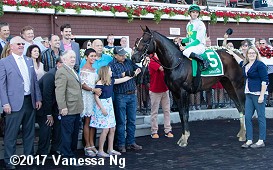 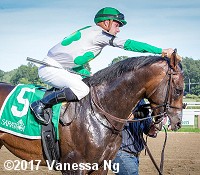 Left: Hunter O'Riley in the winner's circle. Winning trainer Jimmy Toner said, "I had confidence going in. He tries every time he runs so its like we get a piece of it every time he runs. We figured we finish third or fourth today it'll be a good effort and we'll look for something after that, meanwhile he closed well, and he tries, it's like one of those things, you're going to get that break out race, and today was that breakout race so we're really excited. I said well, maybe we'll get up for a piece of it, then said oh wow, we might get there."

Right: Hunter O'Riley gets water on his head after the race. Winning jockey Florent Geroux said, "I had a great trip. We work nicely together. He's always been a fine nice horse. We weren't going that fast but by the second quarter everybody was looking at each other, and there was nothing going on. There was pushing trying to get each other out of the way, and I was just sitting back there" 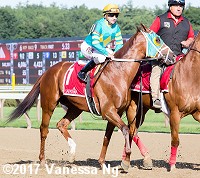 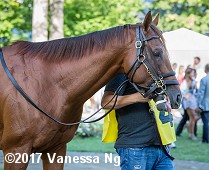 Left: Second place finisher Bigger Picture in the post parade. Trainer Mike Maker said, "He ran great as always and we were second best today. Thrilling race, I thought we'd get there but didn't quite today." Jockey Joe Bravo added, "The horse ran really well from the start, and finished strong. Coming up just short in the end but racing in a big race such as that I really commend the animal for how he ran." 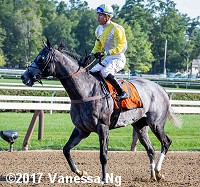 Fourth place finisher and beaten favorite Ascend returns after the race. The Graham Motion trainee has a record of 6 wins, 4 seconds, and 0 thirds in 15 starts, earning $816,780 for owner-breeder Stone Farm and Madaket Stables LLC.