The second Saturday of the Belmont Park spring meeting featured 3 graded stakes, conducted with spectators for the first time in over a year. Conditions were excellent at historic "Big Sandy" on Long Island, with partly cloudy skies, temperatures in the mid 60's, a fast main track and the turf courses firm. The highlight race was the $200,000 Sheepshead Bay Stakes (G2), a 1 3/8 mile trip around 2 turns of the inner turf course for older fillies and mares. Always Shopping was sent off as the 7-5 favorite in the field of 6 off a close second in the Orchid (G3) after winning the La Prevoyante (G3). In to challenge her included 7-2 second choice Antoinette, winner of The Very One (G3), and 9-2 third choice Magic Attitude, 7th in the Hillsborough (G2).

Jockey Edgard Zayas sent Antoinette to the front first time by through easy fractions of 25.27, 51.03, 1;17.05, and 1:40.73 while pressed by 7-1 Mutamakina and stalked by Always Shopping. Turning for home Always Shopping took over the lead through 10f in 2:02.87 but Magic Attitude, last early under Trevor McCarthy, came out 7 wide for room and rallied to win by 3 lengths over Mutamakina in 2:14.32. It was another 1/2 length back to favorite Always Shopping third. 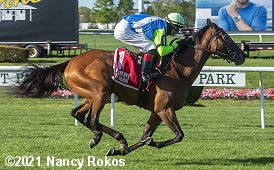 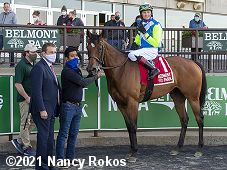 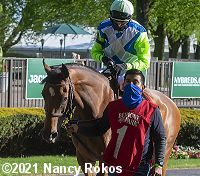 Left: Magic Attitude in the winner's circle. Winning trainer Arnaud Delacour said, "They weren't going fast, but there's no other way to really ride her. She needs to be switched off behind, and she has an explosive turn-of-foot, so it's nice to train a filly of that caliber. She likes it at Belmont. It's more like the European style for her. She can take her time, get balanced, and then produce acceleration."

Right: Magic Attitude in the paddock before the race. Winning jockey Trevor McCarthy said, "I think the biggest thing with her was to get her back and get her relaxed. I watched the [Belmont Oaks that she won in September]. As soon as she broke in that race, he [Javier Castellano] took her way back to last, let her sit and made an outside run. I know they went slow and kind of quickened in the turn, but she was just getting going. She's got a really solid quarter-mile run, and she shows it." 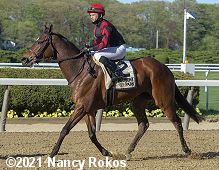 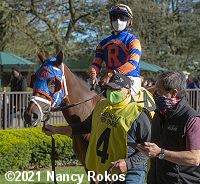 Left: Second place finisher Mutamakina returns after the race. Her jockey Jose Lezcano said, "She broke very well. No one wanted to go to the front, so I let her be where she was. When [Always Shopping] came around the backside, I had to push a little early. I think if the race had set up better for her, she may have beat the other filly."

Right: Third place finisher and beaten favorite Always Shopping in the paddock before the race. The Todd Pletcher trainee improved her record to 5 wins, 4 seconds, and 2 thirds in 16 starts, earning $518,305 for owner-breeder Mike Repole (Repole Stable). 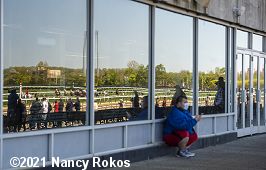 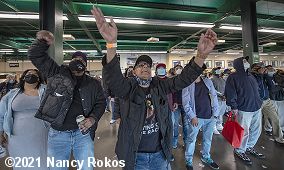 Left: Today was the first day fans were allowed back into Belmont Park since the beginning of the pandemic. You had to purchase your ticket in advance and provide either proof of vaccination or a negative Covid test. We were told about 700 tickets had been sold for today. 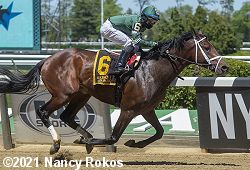 Kicking off the Saturday stakes action was the $200,000 Westchester Stakes (G3) featuring a field of 6 older horses going 1 mile around one turn of the main track. Dr Post, unraced since 4th in last year's Jim Dandy (G3) was the 7-5 favorite over 8-5 Mr. Buff, winner of the Stymie, and 5-1 Wicked Trick, 3rd in allowance company last out. 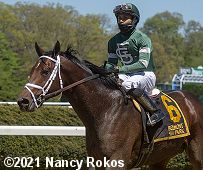 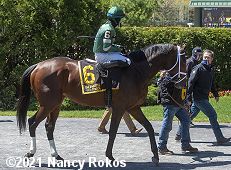 Left: Dr Post returns after the race. Byron Hughes, assistant to winning trainer Todd Pletcher, said, "Todd and the team got him ready down in Florida over the winter and he had been training really well coming into this race and ran to his training. I think this was a good starting point for him and hopefully he can continue to progress from here."

Right: Dr Post heads out of the paddock. Winning jockey Manny Franco said, "The fractions helped. Mr. Buff slowed down a little bit and I was right there. I didn't have to rush my horse off his feet. He just took me around the right way. I think that helped me get the victory." 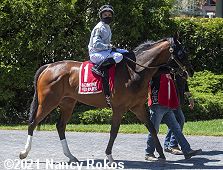 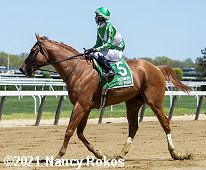 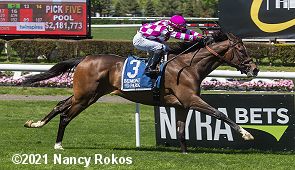 The $200,000 Fort Marcy Stakes (G2) featured a field of 5 older horses going 1 1/8 miles on the inner turf course. Rockemperor, unraced since 5th in the Joe Hirsch Turf Classic (G1) was sent off as the even-money choice over 11-4 second choice Devamani, winner of the Knickerbocker (G2), and 7-2 third choice Wissahickon, unraced since 5th in an allowance at Saratoga in July and was gelded since that race. 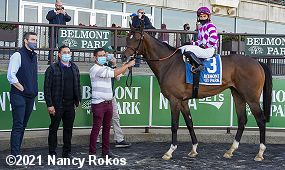 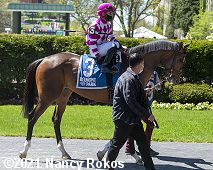 Left: Tribhuvan in the winner's circle. Dan Stupp, assistant to winning trainer Chad Brown, said, "I expected all three to run well as they all had trained well. The winner got a little lost in the wagering but he's a horse last year that we had high hopes for. He had a little trouble in this race last year when the buckle on the rein broke coming out of the gate, so it was nice to see him come back and start the year off the right way."

Right: Tribhuvan heads out of the paddock before the race. Winning jockey Eric Cancel said, "They said they wanted me to go and I did what I was told to do. The trip worked out very well. I settled on the pace and got my horse to relax. He made a really nice run from the quarter-pole to the wire." 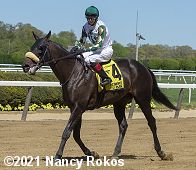 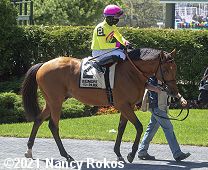 Left: Second place finisher City Man returns after the race. His jockey Trevor McCarthy said, "I can't knock him. He got a great trip. It was a fast pace in front of us and every time I got to Chad's horse [Tribhuvan], he seemed to have a little bit more. My horse was coming off a little bit of a layoff, so I was happy with him."