The highlight of the Tampa Bay Downs racing season is the $400,000 Lambholm South Tampa Bay Derby (G2) at 1 1/16 miles on the main track. It is the major local prep for the Triple Crown series and worth 50 points to the winner as part of the Kentucky Derby Championship Series. Conditions were excellent at the Oldsmar oval, with 3,597 on hand under partly cloudy skies and temperatures in the mid 60's, with the track fast and the turf course firm. Candy Man Rocket was sent off as the 8-5 favorite in the field of 12 off his win in the Sam F. Davis Stakes (G3). In to challenge him included 2-1 second choice Hidden Stash, 3rd in the Sam F. Davis, and 4-1 third choice Promise Keeper, a maiden winner at second asking last out. 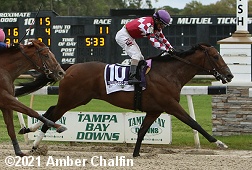 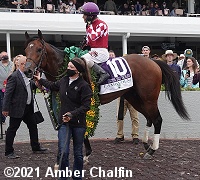 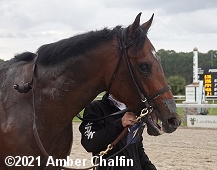 Left: Helium in the winner's circle. Winning trainer Mark Casse said, "He trained well enough that we thought he deserved a chance," Casse said. "Again, I have to give so much credit to Nick Tomlinson who had him down at Palm Meadows for us. We had thought about running in the Gotham and thought, if we're going to try the dirt, let's run him close to home. It worked well for us."

Right: Helium heads back to the barn after the race. Casse added, "This horse is something because he got away a little slow today and we had planned on him being closer. He made that big wide run, he made the lead but (after Hidden Stash rallied) I was going to be happy with second. I thought, we can build on this, because this is only his third start and there is a lot of room for improvement. What was amazing is that he wasn't overly exhausted after the race. He's a beautiful horse, he's bred to run all day long and he looks like a Derby horse, so it's exciting." 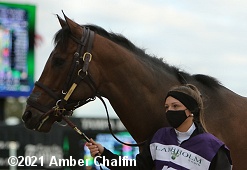 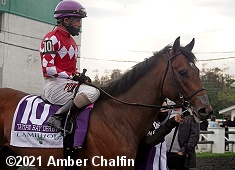 Left: Helium heads walks over to the paddock. Winning jockey Jose Ferrer said, "Mark Casse gave me a great opportunity to go out there and do my job and do my thing. On the backside, I had all kind of horse under me, and I could see who had more horse and when I set him down at the three-eighths pole, I could see I had a chance. I just had so much horse and he flew down the lane. Then I think he got by himself and kind of got bored and he thought, game over. But I still had plemty of horse and be re-broke again."

Right: Helium heads out to the track before the race. 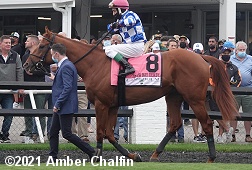 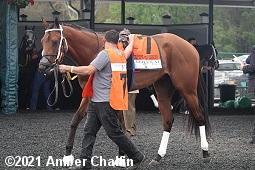 Left: Second place finisher and beaten favorite Hidden Stash in the paddock before the race. The Victoria Oliver trainee improved his record to 2 wins, 1 second, and 2 thirds in 6 starts, earning $191,062 for owner BBN Racing. 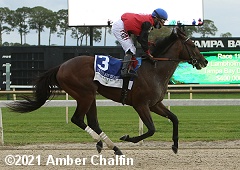 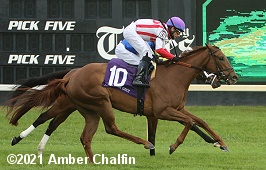 Immediately before the Tampa Bay Derby, a field of 10 three-year-old fillies went to post in the $200,000 Florida Oaks (G3) at 1 1/16 miles on the turf. Allowance winner Jouster was sent off as the 7-10 favorite over 5-1 Domain Expertise, 3rd in the Sweetest Chant (G3) at Gulfstream, and 11-2 Oyster Box, undefeated in 2 starts in allowance company. 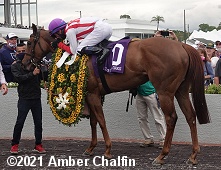 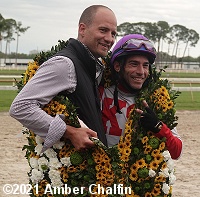 Left: Domain Expertise in the winner's circle. Whit Beckman, assistant to winning trainer Chad Brown said, "Antonio gave her a great ride. She's been training great in south Florida and we brought her here expecting to win. You count on your horse and jockey to know where the wire is, and they timed things perfectly." 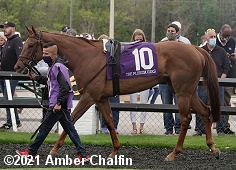 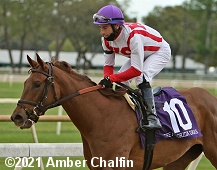 Left: Domain Expertise in the paddock before the race.

Right: Domain Expertise returns after the race. Winning jockey Antonio Gallardo said, "She felt comfortable all the way around," Gallardo said. "Really, when I put her in the clear, she exploded. She exploded like a good filly. I was trying my hardest and you're not thinking about (whether he would catch Jouster), you're thinking about riding your horse and trying to catch her. That's it. I asked Luis (Saez on Jouster) 'What do you think?' and he said 'I don't know.' It was so close. Thanks to the Chad Brown team and everybody." 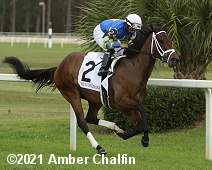 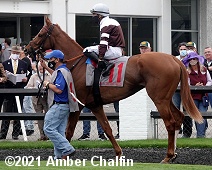 Right: Third place finisher Oyster Box in the paddock before the race. The Graham Motion trainee improved her record to 2 wins and 1 third in 3 starts, earning $62,550 for owner Gainesway Stable. 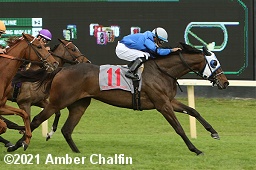 Jockey Daniel Centeno sent 13-2 Myhartblongstodady to the lead out of the chute through fractions of 23.23, 48.80, and 1:12.41 while pressed by 11-1 Morning Molly and stalked by Counterparty Risk. Turning for home, Myhartblongstodady tired allowing Morning Molly to inherit the front through 1 mile in 1:35.74, but Micheline, 4th early under Luis Saez, rallied to win by 3/4 length in 1:47.19. It was a head back to 15-2 New York Girl third, while favorite Magic Attitude trailed throughout to finish 7th beaten just 1 3/4 lengths. 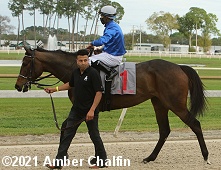 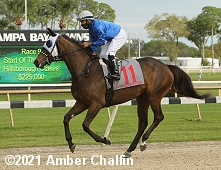 Left: Micheline heads to the winner's circle. Ben Trask, assistant to winning trainer Mike Stidham said, "She is definitely a fighter. She is kind of a silly filly – she's a bad stall walker, so she lives in a little tent behind the barn. She is definitely a unique filly with a lot of talent. I was a little concerned with the outside post and whether she would overcome it. Luis put her in a great spot the whole time and when he called on her, she was there."

Right: Micheline warms up before the race. Winning jockey Luis Saez said, "That was the spot I was trying to get, and we got lucky. She broke good and we were right there. At the half-mile pole, when I started asking her, she started to pick it up, and when we got to the straight everything was about battling, and she did that pretty well. She gave me her kick and it was super. Watching her replays, I knew she could win this race, and it's great when everything comes together so well." 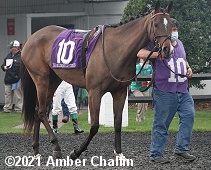 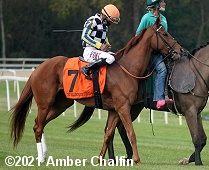 Left: Second placer finsher Morning Molly in the paddock before the race. The Tom Proctor trainee improved her record to 4 wins, 3 seconds, and 0 thirds in 8 starts, earning $152,280 for owner-breeder Willow Lane Stables. 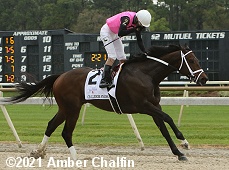 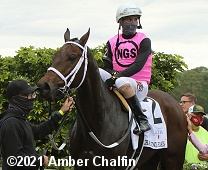 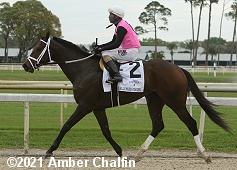 Left: Last Judgment in the winner's circle. Winning trainer Mike Maker said, "It looked like he should be forwardly placed and that's how the race was run. He seemed to be well within himself the whole way. He got into a nice rhythm and kept it going. We tried to chase Knicks Go in the Pegasus. I'll try to spot him more appropriately the rest of the year."

Right: Last Judgment returns after the race. Winning jockey Daniel Centeno said, "Mike's instructions were to take the lead and he broke really sharp and made an easy lead all the way to the wire. (Letmeno) got a little close to me past the half-mile pole, but my horse grabbed the bit again and I knew I had plenty of horse left. It looks like he can run all day. It's nice when you get a lead like that and the horse is enjoying being out there all by himself." 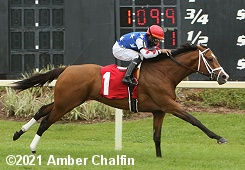 Kicking off the stakes quintet on Saturday was the $75,000 Columbia Stakes with a field of 11 three-year-olds going 1 mile on the turf. Jockey Luis Saez sent 8-5 favorite Winfromwithin to the lead through fractions of 22.50, 46.11, and 1:09.88 while pressed by 7-1 The Right Stuff and stalked by 22-1 Boreas. Turning for home Winfromwithin opened up a 4 length lead through 7f in 1:21.91, and cruised the rest of the way to win by 4 lengths over late-running 8-1 Crew Dragon. It was another length back to Boreas third. 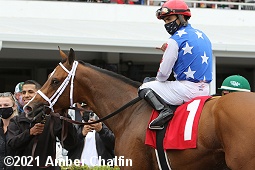 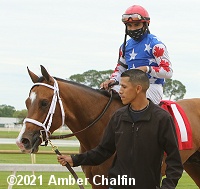 Left: Winfromwithin in the winner's circle. The Todd Pletcher trainee improved his record to 2 wins, 1 second, and 0 thirds in 5 starts, earning $92,120 for owner Jim Bakke.

Right: Winfromwithin returns after the race.