The first Saturday in October at Belmont featured five graded stakes all with Breeders' Cup implications. Conditions were excellent on Long Island with sunny skies and temperatures in the mid 60's, fast track and firm turf. The highlight race of the afternoon was the $250,000 Belmont Derby Invitational (G1) for 3-year-olds going 1 1/4 miles on the inner turf course, a Breeders' Cup Challenge "Win and You're In" qualifier for the Turf. After Saratoga Derby Invitational winner Domestic Spending was scratched, Gufo was sent off as the 7-5 favorite in the field of 8 off his close 2nd in the Saratoga Derby. In to challenge him included 3-1 second choice No Word, 3rd in the Saratoga Derby, and 9-2 third choice Pixelate, winner of the Del Mar Derby (G2).

Jockey Kendrick Carmouche sent 28-1 longest shot Mo Ready to the lead first time by through fractions of 24.67, 50.61, 1:15.56, and 1:39.26 while pressed by 15-2 Moon Over Miami and stalked by No Word. In the stretch Mo Ready continued to lead through 9f in 1:51.10 befoee tiring. Favorite Gufo, 5th early under Junior Alvarado, came out for room and rallied by to win by a length over No Word in 2:02.25. It was another 1 3/4 lengths back to Mo Ready third. There was an inquiry into the stretch run about possible interference by the winner against eventual 6th place finisher Moon Over Miami but the result stood. 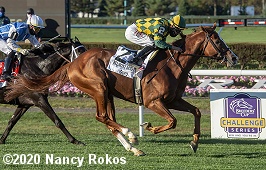 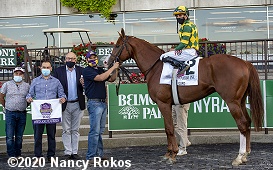 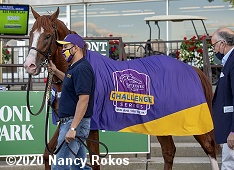 Left: Gufo in the winner's circle. Winning trainer Christophe Clement said, I thought he had a great trip from Junior and when he asked him to quicken, he really quickened well in the stretch. He's a good horse. If you look at all his races this year, he's been running well all year round. I know he got beat last time but he actually ran a winning race when you look back at it."

Right: Gufo heads back to the barn after the race. Winning jockey Junior Alvarado said, "He's not a hard horse to ride, but it can be a little tricky with him to make sure he doesn't fall too far back or it takes him too long to get home. I kept him between horses; he was paying attention to everything and he was focused. When I turned for home, I knew I had a lot of horse under me. I definitely thought it was close. The way he was travelling there, I knew I had plenty of horse to still finish. He was in a nice, nice rhythm the whole way around so I was pretty happy." 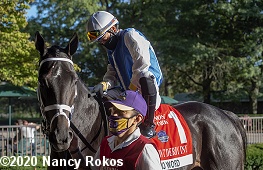 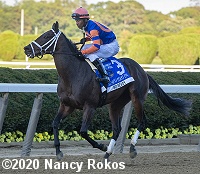 Left: Second place finisher No Word in the paddock before the race. Jockey Jose Ortiz said, "I had a good trip. The other horses kept taking back and I didn't have to use him to get the position. He did well but the other horse closed nicely."

Right: Third place finisher Mo Ready heads out of the paddock before the race. The Todd Pletcher trainee improved his record to 2 wins, 1 second, and 2 thirds in 8 starts, earning $143,180 for owner-breeder Mike Repole.


An hour before the Belmont Derby, the $250,000 Joe Hirsch Turf Classic Stakes (G1) featured a field of 7 older horses going 1 1/2 miles around 2 turns of the Widener Course. Manhattan (G1) runner-up Rockemperor was sent off as the 2-1 favorite off his 3rd place finish in the Old Forester Turf Classic (G1). In to challenge him included 5-2 second choice Channel Maker, winner of the Sword Dancer (G1), and 9-2 third choice Sadler's Joy, 4th in the Sword Dancer after being disqualified from first in the Bowling Green (G2). 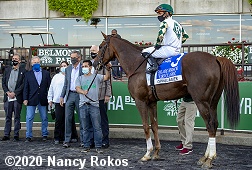 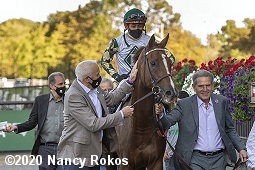 Left: Channel Maker in the winner's circle. Winning trainer Bill Mott said, "We would have wanted to envision it working out this way and it worked out. It doesn't always work out as planned, but it did today and it did last time. He had a little pressure early from Cross Border but he was able to sneak away from him. I think longevity is a true test of a good horse. I think (Breeders' Cup Turf next start) is a foregone conclusion." Jockey Manny Franco added, "I didn't want to change his style. I wanted to go to the front with him and do what he likes, and that's what I did. I had to use him a little in the beginning, but after that, it paid off."

Right: Channel Maker takes his walk down Victory Lane. Winning co-owner Dean Reeves said, "When he got comfortable and the times were where we wanted them to be...I just felt like when he made that jump turning for home, I didn't think they could come get him. He's that kind of horse. He's just tough." Co-owner Randy Hill added, "You love the horse for the way he fights. His negative side is that sometimes he fights his jockey. He wants his way and sometimes we've had different results, but Manny's ridden this horse perfectly. I was with Dean; going for home, they weren't going to get him." 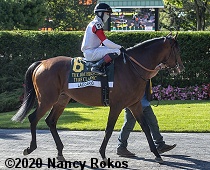 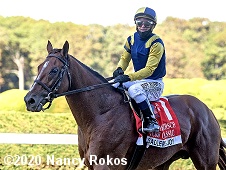 Left: Second place finisher Laccario heads out of the paddock before the race. Jockey Dylan Davis said, "He broke well for me, tucked in and saved some ground and gave a nice run down the lane. I was very happy with how he ran. Speed has been holding up today so far, so he might have been against the grain. He gave me a good effort. He's a really cool horse; very nice to ride."

Jockey Junior Alvarado sent Endorsed to the lead out of the chute through fractions of 23.30 and 46.62 while pressed by Complexity and stalked by Stan the Man. On the far turn jockey Jose Ortiz sent Complexity to lead through 3/4 in 1:10.05. Complexity drew off late to win by 2 1/4 lengths over late-running Code of Honor by 2 1/4 lengths in 1:33.82. It was a long 7 1/4 lengths back to Stan the Man third, and 3 1/4 more to Endorsed third. 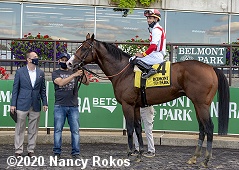 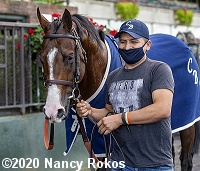 Left: Complexity in the winner's circle. Winning trainer Chad Brown said, "He was very relaxed and Jose rode him terrific. It worked out well. We'll look at either the [Dirt] Mile or the Sprint. I'll keep him eligible to both races but I'm leaning Mile right now."

Right: Complexity again. Winning jockey Jose Ortiz said, "He was wonderful today. In the [Grade 1] Forego, he broke a step behind and I decided to take position and ended up going a little quicker than I wanted to. Here, going a mile, I didn't have to rush him. He loved the track here. He's doing amazing. Chad took his time with him and put him in the right races and got his confidence back. He's a happy horse and doing good." 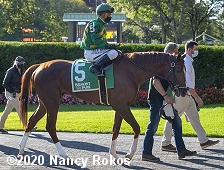 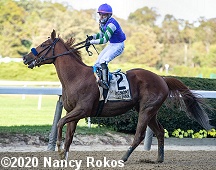 Left: Second place finisher Code of Honor in the paddock before the race. Jockey Javier Castellano said, "The way the race unfolded, it was a disadvantage for my horse. He had to come from the back and the winner had speed and a good post in a small field which they used to their advantage. I'm not disappointed. He ran a good race. I got to the point where I thought we could go by but we couldn't. With a better field and more horses he could get it done."

Right: Third place finisher Stan the Man heads out of the paddock. The John Terranova trainee improved his record to 7 wins, 7 seconds, and 3 thirds in 25 starts, earning $501,124 for owner Long Lake Stable.

Kicking off the Saturday stakes quintet was the $150,000 Gallant Bloom Handicap (G2) for older fillies and mares sprinting 6 1/2 furlongs on the main track. Victory Ride (G3) and Prioress (G2) winner Frank's Rockette was sent off as the 3-10 favorite in the field of 5 over 9-2 Royal Charlotte, 2nd in the Regret, and 7-1 Pacific Gale, 7th in the Honorable Miss Handicap (G2). 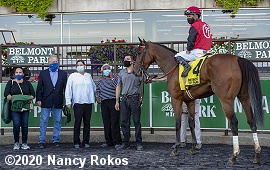 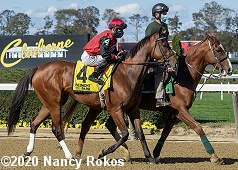 Left: Frank's Rockette in the winner's circle. Winning trainer Bill Mott said, "It looked on paper like there wasn't a lot of early speed in the race but everybody is looking at the same thing and sometimes people have horses that have early speed but never used it. I think they saw that with [Pacific Gale] and let her bounce to the lead. No matter how it looks on paper you have to be flexible enough to do the right thing. With today's group, seven-eighths wouldn't be a problem but the Breeders' Cup is a different story and a different group of horses. I'm proud of our filly and I think we need to consider it, but we need to be realistic, too.

Right: Frank's Rockette in the post parade. Winning jockey Junior Alvarado said, Plan A was to try to go the lead. We broke out of there and I sent her, but they all sent their horses, so I settled and from there was just waiting until it was time. I went by [Pacific Gale] and she really opened up and made my job very easy.  I asked her hard for 10 jumps just to make sure she opened up enough. Then, I took the reins and geared down little by little. She lets you know she can't wait to go by horses and when you really ask her she has a very good turn-of-foot." 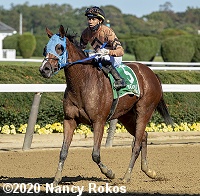 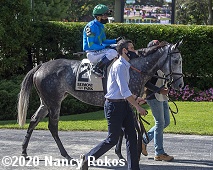 Left: Second place finisher Honor Way returns after the race. Jockey Jose Ortiz said, "She almost broke through the door, but fortunately, they opened the doors at the same time. She gave it a decent run but the winner was much the best. Junior rode a great race on the winner." 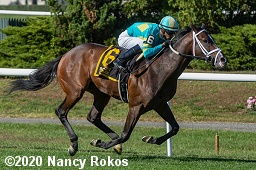 The $150,000 Pilgrim Stakes (G2) featured a field of 6 two-year-olds going 1 1/16 miles on the inner turf. Saratoga debut winner Public Sector was sent off as the 4-5 favorite over 7-2 ShawdyShawdyShawdy, 4th in the Juvenile Stakes at Kentucky Downs, and 9-2 American Monarch, 4th in the Summer Stakes (G1) at Woodbine. 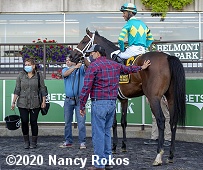 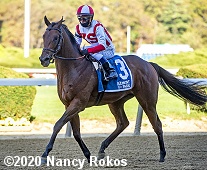 Left: Fire At Will heads to the winner's circle. Winning jockey Kendrick Carmouche said, "I left there running and he already had his ears pricked before we turned on the backside. I wanted to keep him on the left lead where he wouldn't get so aggressive on the backside. I finally popped him over and he sat so nicely in my hands. I just had to make sure I waited as long as I can, because when you have Chad Brown horses chasing you in the stretch, you know you have to make sure to keep going faster."

Right: Second place finisher and beaten favorite Public Sector returns after the race. Jockey Javier Castellano said, "There was no pace in the race and I can't control that."