Memorial Day weekend at Belmont Park in New York includes one graded stakes per day over the three days. Kicking off the graded stakes action this year is the $150,000 Sheepshead Bay Handicap (G2) for older fillies and mares going 1 3/8 miles over the inner turf course. A field of seven went to the gate on a warm sunny Saturday afternoon, before an on-track crowd of 7,138. Todd Pletcher sent out the two shortest prices on the board. Last year's winner, 6-5 Honey Ryder, was making her first start since finishing 11th in the Dubai Sheema Classic, while 7-5 second choice Safari Queen came into this race off a 2-race winning streak, including the Orchid at Gulfstream and the Bewitch at Keeneland. 7-1 third choice La Dolce Vita won the Hollywood Wildcat at Calder in her last start, with the rest of the field in double digits. 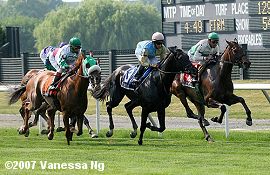 96-1 outside Moon Dolly set the early pace of 23.70, 48.67, 1:13.59, and 1:38.40 over the firm course while being challenged by 12-1 Cliffrose the whole way. Safari Queen stalked the pace in third out wide, while Honey Ryder sat near the back of the field for the first mile, half a length behind La Dolce Vita. On the far turn, the pacesetters both tired badly and dropped from contention. Safari Queen inherited the lead and opened up a 2-length advantage with a furlong to go. However, stablemate Honey Ryder, who took the far turn very wide, responded well when asked by Garrett Gomez, and drove right on by at the 1/16 pole to win by 1 length in a time of 2:13.00. It was 3/4 length back to 16-1 Hostess in third, and 1 1/4 more to La Dolce Vita in fourth. 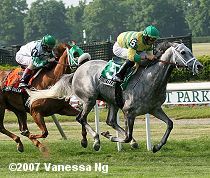 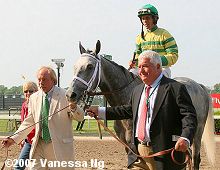 Two of the Greathouse brothers that make up her owner Glencrest Farm LLC lead Honey Ryder to the winner's circle. Winning jockey Garrett Gomez said, "Two or three of them left there in good shape, so I went ahead and nudged her right before we went under the wire to stay a little closer. Just as we went a little way, I changed my mind. I said, `They're going at a pretty good clip. Let me just back off.' I got myself shuffled back a little bit. From then on, she is just a true professional. The main concern was if she would come back from Dubai. A lot of times, the Dubai trip takes a lot out of them, especially a mare. She bounced back in good shape." 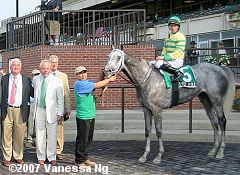 Honey Ryder in the winner's circle with two of her owners and trainer Todd Pletcher, standing behind one of the Greathouse brothers. Pletcher said, "I've always thought the shipping back from Dubai thing has always been overrated. The horses that we've brought back have always come back in good form. This filly came back and could have run a month ago. This is the spot we circled to point for. Fractions weren't real fast, but she rated kindly. It was a good effort." 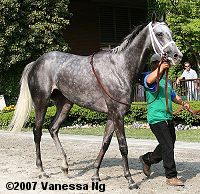 Honey Ryder heads back to the barn after the race. 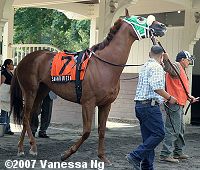 Second place finisher Safari Queen acting up in the paddock before the race. She is also trained by Todd Pletcher who said, "I was hoping for a dead-heat. Safari Queen ran a game race and I'm very proud of her." 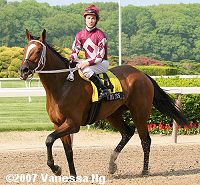 Third place finisher Hostess returns after the race. The H. James Bond trainee was second in the ungraded Destiny Dance Stakes in her last start. With this result the Chester House filly improves her career record to 2 wins, 3 seconds, and 4 third in 11 starts with earnings of $122,734.