Memorial Day weekend stakes action continued at Belmont Park on Sunday with the running of the $100,000 Jaipur Stakes (G3). A field of nine older horses went to post in this 6 furlong sprint over the inner turf course before an on-track crowd of 9,599 under sunny skies and warm temperatures. Weigelia was sent off as the 4-5 favorite off his win in the Ponche Handicap at Calder last time out, however he had not raced on turf since last August. In to challenge were 4-1 second choice Will He Shine, third in the Churchill Downs Stakes, and 10-1 third choice Baron Von Tap, sixth in the Fort Marcy at Aqueduct in late April. 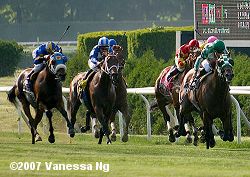 Weigelia was hustled to the front right away and was challenged to his outside by 28-1 longest shot Retribution through a quarter mile in a quick 21.76 and a half in 44.27 over the firm course. Will He Shine was bumped at the start and was at the rear of the field for the run down the backstretch. Turning for home, Weigelia saved ground along the rail but began to tire from the fast pace. 24-1 Ecclesiastic, fifth early, came out three wide into the stretch and closed well, passing the tiring pacesetters inside the 3/16 pole. Ecclesiastic drew off late to win by 2 3/4 lengths in a time of 1:07.54. Another closer, 11-1 Salute The Count, rallied well to nose out the heavy favorite Weigelia in the final strides to get second place money, while Will He Shine failed to fire and finished last. 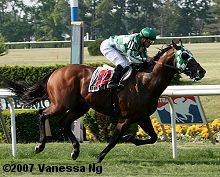 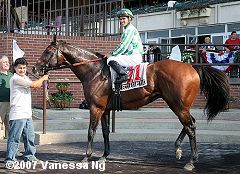 Ecclesiastic in the winner's circle. Winning trainer Allen Jerkens said, "Now that he's older, it doesn't seem that he wants to go long any more. He might go a mile, but he's got a lot of natural speed. I thought if he could stay in striking distance today, he would have a chance. He's a beautiful horse. He won this race before when it was seven furlongs. I think his game is going short on the grass. We'll see what races are out there for him." 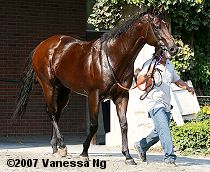 Ecclesiastic heads back to the barn after the race. Winning jockey Javier Castellano said, "Allen told me the horse had been training great. I wasn't surprised he was right up there. I'm very lucky he broke good out of the gate. I just wanted to follow the 8-horse (Weigelia). I followed him the whole way. I could see he didn't have much horse. My horse just gave me a great kick in the end. He was very impressive." 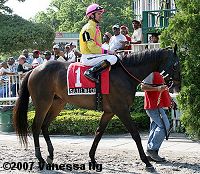 Second place finisher Salute the Count heads out to the track before the race. He came into the Jaipur off a fifth place effort in the Baltimore City Turf Sprint at Pimlico on Preakness day. With today's result the Anthony Dutrow trainee improved his career record to 10 wins, 6 seconds and 4 thirds in 35 starts with earnings of $256,070. 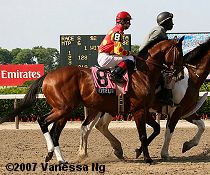 Third place finisher and beaten favorite Weigelia in the post parade. The 6-year-old increased his career earnings to $985,968 in 20 starts, with 13 wins, 7 seconds, and 11 thirds. Trainer Michael Trombetta said before the race, "He came out of his last race at Calder in good shape. The one thing with him: he loves the Calder main track and the Inner Turf at Belmont."