The traditional Memorial Day feature at Belmont Park is the $600,000 Metropolitan Handicap (G1) for older horses at 1 mile on the main track. An on-track crowd of 14,901 was on hand under clear skies and warm temperatures for the 114th edition of the "Met Mile". A field of nine went to post with Oaklawn Handicap winner Lawyer Ron sent off as the 8-5 favorite for trainer Todd Pletcher. Sun King, fresh off his 3rd place finish in the Westchester Handicap, was the 7-2 second choice on the board while the Richard Dutrow trained entry of Mr. Umphrey and Silver Wagon were coupled in the wagering and sent off as the 9-2 third choice. Silver Wagon won the Carter Handicap in his last start while Mr. Umphrey was making his stakes debut, coming off a close second in an optional claimer in late April. 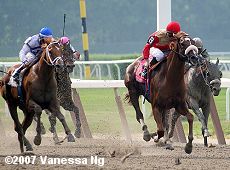 Mr. Umphrey and 21-1 Half Ours battled up front with 9-1 Latent Heat close behind and between them through a quarter in 23.21 and a half in 45.70 down the long backstretch run. Lawyer Ron sat in perfect stalking position in fifth out wide avoiding traffic trouble, while Sun King was outrun early and settled near the rear of the field. Around the far turn, the pacesetters faded from contention as Latent Heat inherited the lead at the top of the stretch, getting 6 furlongs in 1:10.29. Lawyer Ron put in a brief challenge at the 3/16 pole but 10-1 Corinthian, who had stalked the pace close up in fourth the whole way while racing 5 paths out, came on through the lane and took over the lead with a furlong remaining. Corinthian was all out late to hold off the late rally of 24-1 longest shot Political Force to prevail by 3/4 length in 1:34.77 over the fast main track. It was just 1/2 a length back to Lawyer Ron in third, and a log 3 lengths back to Sun King in fourth. Silver Wagon failed to fire and was sixth, while Mr. Umphrey was finished after half a mile and finished last. 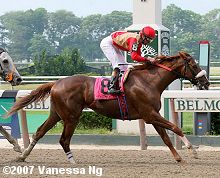 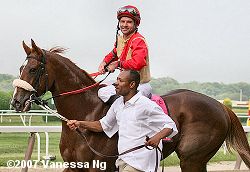 Corinthian returns after the race. Winning jockey Kent Desormeaux said, "You couldn't have planted me at the 1/2 mile pole and asked for better position. More than the position was the way he was carrying me. When a good horse is traveling well, 45 feels like 48 (seconds). I thought we were going slow, but I knew the caliber of horse I was on. He was so within himself. Coming to the 3/8 pole, he kind of got into gear and acted like he wanted to go for the wire. That was the only time I restrained him and said, `No, not yet.' When the horses engaged, he jumped back in the bridle. I didn't have to ask him for much, even when it was time to go. In the stretch, I thought he was just doing enough, quite frankly. All I could hope for at that stage of the race was that nothing came swinging wide and he couldn't see it. He was really determined." 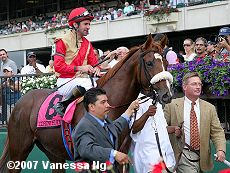 Corinthian takes his walk down Victory Lane. Winning trainer James Jerkens said, "When I saw him break and laying that close, I knew we were in business. He ran to his workout the other day. When he is juicy and on the muscle, he's right. I thought we had Lawyer Ron, then I said, `Oh my God, here comes `The Chief' (his father, Hall of Fame trainer H. Allen Jerkens). We were going one at a time, worrying about this race. We'll have to discuss it with his owners where he goes next. We were willing to throw out the Excelsior to get ready for this one. He broke his maiden going a mile. The work a week ago (5f in a bullet 58 seconds on May 21) was beyond anything I ever saw. I never had a horse do what he did. He was just strong all the way. He was terrific all week. I thought if he didn't run good today, he just wasn't good enough." 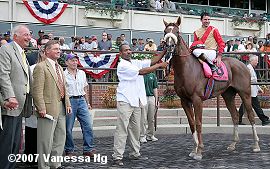 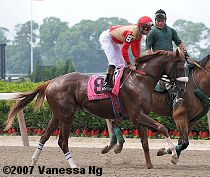 Left: Corinthian in the winner's circle after the Met Mile. 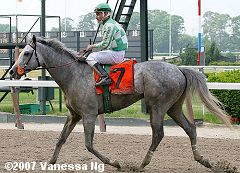 Second place finisher Political Force returns after the race. His trainer Allen Jerkens said, "He ran a great race. Now, he's starting to come into himself. I thought they would go a little faster for the first quarter, but they really started to hum in the second quarter." Asked about the winner, trained by his son, he said, "The only bad race he's ever run was last time when he got stuck in the gate. (The public) got down on him really quick, but Jimmy said he had been working really good. If we couldn't win, I'm glad Jimmy did."

Jockey Cornelio Velasquez said, "My horse? He run big. Corinthian is a good horse. Prado (aboard Lawyer Ron) hit him in the face by accident, but we beat him anyway." 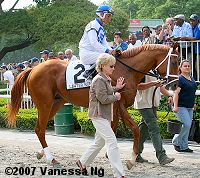 Third place finisher and beaten favorite Lawyer Ron in the paddock before the race. His jockey Edgar Prado said, "I had a beautiful trip. I couldn't ask for much more. The pace was a little fast early. I put my horse in a position to win, but he just didn't keep going. He tried hard, but the horse in front was just too tough and kept on running hard at the end." 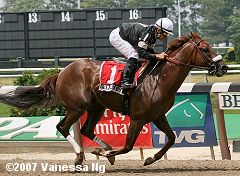 On the undercard of the Met Mile was the $65,000 Richmond Runner Stakes for older New York-breds sprinting 6 1/2 furlongs on the main track. Prohibitive 1-5 favorite Commentator ran as expected, leaving the gate quickest of all and never looking back, steadily increasing his lead over his 4 hapless rivals the whole way. Ridden out to the finish by Corey Nakatani, he won by 11 1/4 lengths over 15-1 Executive Search in 1:15.69. 6-1 second choice Starcastic was third.
Full results chart 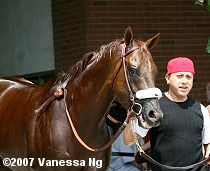 Commentator returns to the barn after the race. His trainer Nick Zito said, "He's an amazing horse. That's how he ran in the race before he won the Whitney. I don't think the track was that fast today. I don't know what kind of Beyer (Speed Figure) he's going to get, but it's going to be in the moon. The best thing we need to do is hope he stays around until the end of the year. Mr. Farmer (owner) expressed that he'd like to win the Whitney again. That was a big thrill for him. One thing is for certain, we're never going to run out of races with him. He's a real treasure."

Jockey Corey Nakatani said, "Special horse, huh? He broke like a rocket. When you ride horses like this it makes your job easy. He did it very easy and I'm looking forward to another stint with him."