There are two sprints held on Saudi Cup night, one on the dirt and one on the turf. The $1.5 million Saudia Sprint is the feature sprint event on the card, contested at 1200 meters (about 6 furlongs) around one turn of the main track. Vosburgh (G1) winner and Mr. Prospector (G3) third place finisher Imperial Hint was sent off as the 3-5 favorite over 5-1 Gladiator King, winne of the Dubawi (G3) and Al Shindagha (G3) at Meydan, and 11-2 Captain Scotty, winner of the Palos Verdes (G2) at Santa Anita.

Jockey Yutaka Take hustled 8-1 Matera Sky to the lead down the back while pressed by Captain Scotty and stalked by Imperial Hint. Turning for home, Imperial Hint tired badly as Matera Sky opened up by 6 lengths midstretch. 10-1 New York Central, unhurried early under Irad Ortiz Jr., closed well in the lane to nail Matera Sky by a head at the line in 1:11.68. It was another 2 1/4 lengths back to Gladiator King third, while Imperial Hint checked in 12th beaten 14 1/2 lengths. 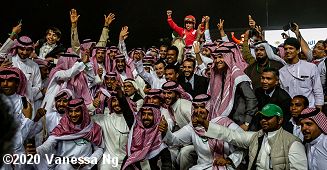 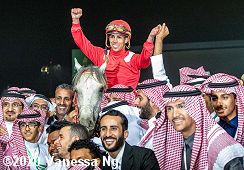 Left: New York Central hidden somewhere in the crowded winner's enclosure. Winning jockey Irad Ortiz Jr. said, "Inshallah. For a second I thought I was too far back turning for home but as soon as I started to ask my horse he started to pick it up and give me some run. Then I knew I had a chance. The other horse (Matera Sky) started stopping and was coming back fast. So I kept riding and I still had a chance to get there on time. (Winning on a night like this) means a lot. I enjoyed it, riding for Prince Faisal. I'm so excited."

Right: There he is, way in the back! 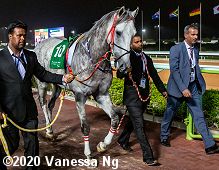 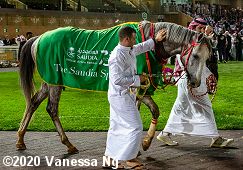 Right: New York Central heads back to the barn in his winner's blanket. 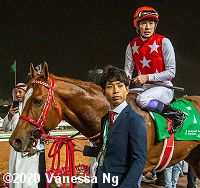 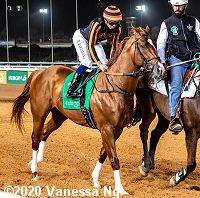 Left: Second place finisher Matera Sky returns after the race. Trainer Hideyuki Mori said, "It was so close, he started well and just performed brilliantly throughout. It is a shame such a good run was lost by such a such a small distance." Jockey Yutaka Take added, "I think the outside draw took a little bit out of him that he needed for the end. With an inside draw we would have won well. I really thought we had it there for a while, so it's a bit disappointing to run so well and finish second."

Right: Third place finisher Gladiator King in the post parade. Jockey Mickael Barzalona said, "They went very fast and he lost pace with them. He ran well. He's a good horse who does the job." 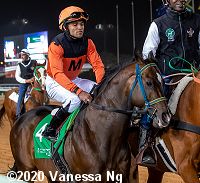 12th place finisher and beaten favorite Imperial Hint in the post parade. Jockey Joel Rosario said, "I looked like I was in a good spot, but I just got no horse in the end. He just got tired."

Jockey James Doyle sent Mubtasim to the lead out of the gate and he was pressed by Legends of War and stalked by Larchmont Lad and Dark Power. Turning for home, Mubtasim opened up a clear lead but Dark Power, confidently ridden by Frankie Dettori, collared him at the 1/8 pole to prevail by a head in 1:19.63. It was another 2 lengths back to late-running favorite Glorious Journey third. 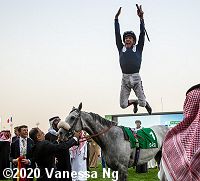 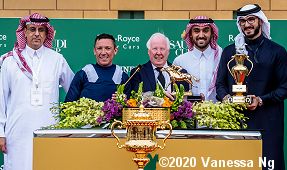 Left: Frankie Dettori does his flying dismount off Dark Power in the winner's enclosure. Winning trainer Allan Smith said, "Frankie gave him a super ride. The main thing was getting him settled early on and Frankie just got him slotted in and relaxed. I always thought he'd make a seven-furlong (1400m) horse even when I bought him. We bought a sprinter, but he's always done his best at the end of a race. I'll take it!"

Right: The trophy presentation for the STC 1351 Cup. 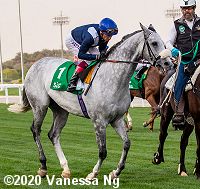 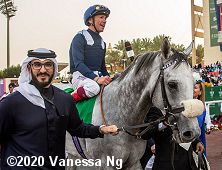 Left: Dark Power in the post parade. Winning jockey Frankie Dettori said, "Sheikh Isa (Bin Salman Bin Hamad Al-Khalifa, owner) is a friend of mine. I've been going to Bahrain for the last five years and I took the ride a month ago. I didn't know what to expect to be honest with you, but this is an amazing feeling. To win a race like this for your mates is a double-whammy. What they've done in the space of two months (with this turf course) is remarkable."

Right: Dark Power heads into the winner's circle after the race. 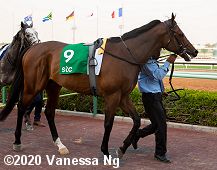 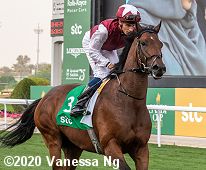 Left: Second place finisher Mubtasim in the walking ring. Jockey James Doyle said, "I know the winner well. I have won on him in Bahrain before. Frustrating, we had a dream run round. He stays the trip really well, I have no complaints. I'm delighted with him. I have been coming to Saudi Arabia quite a bit, I have seen the track develop and they have done a magnificent job with it."