The title of world's richest horse race changes hands on Saturday evening at King Abdulaziz Racetrack with the inaugural running of the $20 million Saudi Cup. The main event is the final race of an 8-race card, scheduled to go to post at 8:40PM local time (12:40PM ET). A full field of 14 older horses will contest this 1800 meter (about 1 1/8 mile) trip around one turn of the 1 1/4 mile dirt main track in Riyadh.

Maximum Security is the 11-4 favorite (from OddsChecker.com at time of writing) off wins in the Haskell Invitational (G1), Bold Ruler (G3), and Cigar Mile (G1). The Jason Servis trainee drew post 7 and will have regular rider Luis Saez aboard. In to challenge him include 7-2 second choice McKinzie, winner of the Whitney (G1) before finishing second in the Awesome Again (G1) and Breeders' Cup Classic (G1). Joel Rosario gets the call for trainer Bob Baffert out of post 9. Two horses are at 7-1 third choice, Benbatl, winner of the Al Maktoum Challenge Round 2 (G2) gets post 3 with Oisin Murphy in the irons, and Mucho Gusto, winner of the Pegasus World Cup (G1), gets post 8 for Baffert and jockey Irad Ortiz.

The post positions were drawn in the usual double-blind manner, with the 14 horse names on slips of paper inside golden "falcon eggs", while white eggs held the 14 numbers. After a name was drawn from the golden eggs, that horse's representative came up on stage to choose a white egg to reveal the post position.

Ricardo Corona, assistant to trainer Saeed bin Suroor saying of post 3 for Benbatl, "I'm happy enough. He's a horse who can jump and travel and I'm sure Saeed can discuss options with (jockey) Oisin Murphy before the race." Longshot Mjjack drew the outside. Trainer Sami al Harabi said, "I wanted the inside not the outside, my horse never runs from an outside gate but it’s a new adventure and a big race, so we have to take it either way."

Note that unlike in North America and Dubai, the saddlecloth numbers do NOT correspond with post positions. The Saudi Cup goes off at 12:40PM (all times Eastern), while the first race is the $1 million Mohamed Yousuf Naghi Motors Cup at 8:00AM. The table to the right has all the post times.

The races will be shown live on TVG in the U.S. and HPI-TV in Canada, as well as at racetracks and simulcast sites. In addition, Fox Sports 1 will show the Saudi Cup starting at noon ET.

Below are the entries and post positions for the Saudi Cup. All entrants carry 57 kg (126 lb) other than mares Midnight Bisou and Magic Wand who get a 2 kg break. 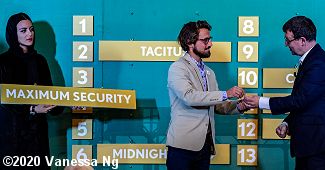 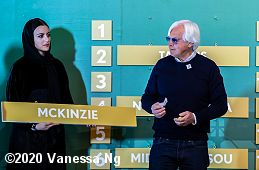 Left: Maximum Security draws post 7. Trainer Jason Servis was happy with the lucky post 7, saying "I'm good with the post. I probably would have preferred a little more outside but that's fine. We were drawn seven in the Florida Derby, the Kentucky Derby, the Haskell and now the Saudi Cup. We'll see what happens."

Right: Bob Baffert draws the 9 for McKinzie. Baffert noted that the top American horses drew together in the middle of the gate. "Nines (for McKinzie) are good. He's a good horse but has suffered some tough losses, but he runs well fresh and shows up every time. I find it interesting that all the Americans drew together six, seven, eight and nine. When these horses come here they have to bring their a-games, you can't come here and bring your b-game. You have to come here with a really good horse and he has to show up. It's the jockey's job to work out the competition. The break is going to be so essential. I noticed the starting gate is from France which is very narrow (stalls) so there's no room for our guy to handle the gate. We're all in the same boat. " 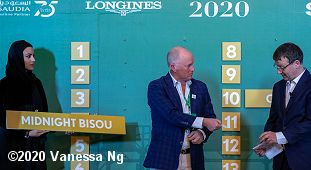 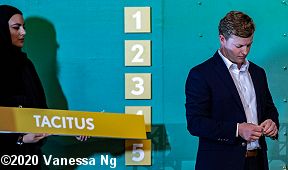 Left: Assistant trainer Scott Blasi drew post 6 for Midnight Bisou and trainer Steve Asmussen. Co-owner Jeff Bloom said, "We were supposed to be selling her (at Fasig-Tipton November) but the day before the Breeders' Cup we decided to race her for another year because there's a $20 million race on the horizon. We always felt Midnight Bisou would be up to the challenge of facing the boys, and with a $20 million ticket it was a no-brainer. I'm probably not going to sleep for the next couple of days, I must have slept 3 minutes on the flight over. We think we have a horse that can win the race. She is in a whole different league. Mike (Smith) says she adapts to anything that's thrown at her, she doesn't have to have a lot of speed. Just point her at the finish line and she'll get us there. If she runs well she will just stay here (for the Dubai World Cup)."

Right: Tacitus will break from the 2, away from the other Americans. Riley Mott, assistant to father Bill said, "I think it's fine for our horse. There are probably several others in the field that will show some early speed and he'll get outrun to the front anyway but it's a long run into the turn and a long way for the jockeys to sort themselves out. I think It'll be alright." 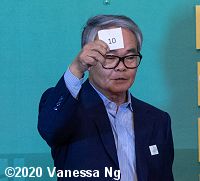 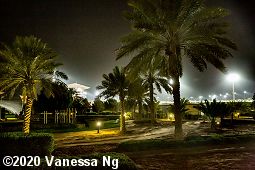 Left: Trainer Hidetaka Otonashi draws the 10 for Chrysoberyl. He said, "I didn't want an inside draw so 10 should be OK. I will meet with Christophe (Soumillon, jockey) tomorrow and discuss tactics then."

Right: The palm trees in front of the grandstand lit up on draw night.