Souper Speedy was sent to the lead exiting the chute by jockey Jose Lezcano and he set fractions of 22.38 and 44.42 while pressed by 15-1 Laurie's Rocket and Strapping Groom. Entering the stretch, Sage Valley, who stalked the pace in fourth, moved up to take over the lead from the tiring pacesetters through 3/4 in 1:09.23. Kept to task by jockey Cornelio Velasquez, Sage Valley pulled away to a 1 length victory over late-running 4-1 fourth choice Politicallycorrect in 1:22.49 over the fast main track. It was another 1/2 length back to 9-1 Hello Lover third. 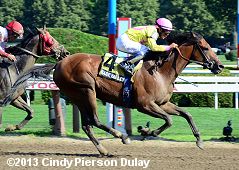 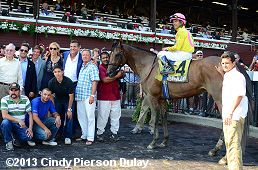 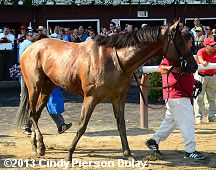 Left: Sage Valley in the winner's circle. Winning trainer Rudy Rodriguez said, "Very, very perfect trip. Cornelio gave him a perfect ride. He's one of the best riders in the country. You always want to see those kinds of fractions when you come from behind. He's a very classy horse. It looked like he put a lot in the race; if we give him the right time, he ought to show up next out."

Right: Sage Valley heads back to the barn. 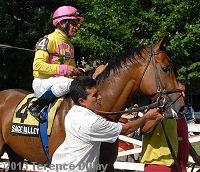 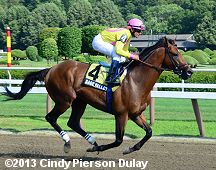 Left: Sage Valley in the paddock.

Right: Sage Valley in the post parade. Winning jockey Cornelio Velasquez said, "I broke well and had a good trip; there was a lot of speed. I came into the stretch, and I had a lot of horse. He's a nice horse." 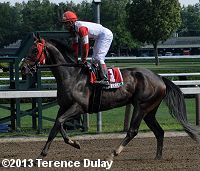 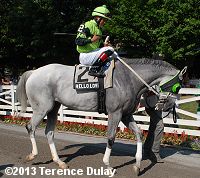 Fourth place finisher and beaten favorite Souper Speedy in the post parade. The 9-5 favorite set the early pace under Jose Lezcano, but tired late to finish fourth beaten 2 1/4 lengths. The Tom Albertrani trainee has a record of 3 wins, 2 seconds, and 1 third in 8 starts, earning $236,634 for owner-breeder Live Oak Plantation.


The traditional feature on opening day is the $150,000 Schuylerville Stakes (G3) for two-year-old fillies sprinting 6 furlongs on the main track. A field of 7 (6 betting interests) went to post, with Bahnah sent off as the 6-5 favorite exiting her 6 length debut romp at Churchill Downs. In to challenge her included 2-1 second choice Brazen Persuasion, winner of a maiden at Churchill after finishing second in her debut, and the 2-horse Stonestreet Stables entry of Elena Strikes, a debut winner at Monmouth, and Yes Liz, a debut winner at Belmont.

Jockey Rosie Napravnik sent Brazen Persuasion to the lead and she set fractions of 21.75 and 44.68 while pressed by Yes Liz and Bahnah. Brazen Persuasion continued to lead into the stretch, getting 5/8 in 57.72. Bahnah came out three wide for her rally, and the pair hit the line together in a dead heat for win in 1:12.12. It was 1 1/4 lengths back to late-running Elena Strikes third, and 2 1/2 lengths more to entrymate Yes Liz fourth. 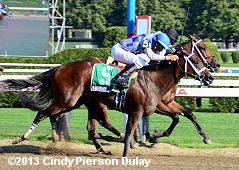 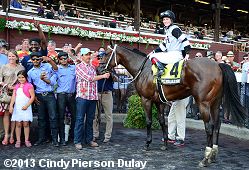 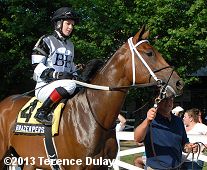 Left: Brazen Persuasion in the winner's circle. Winning trainer Steve Asmussen said, "She broke sharp, was away real cleanly. The entry tackled her immediately. Coming into the stretch, I thought she got a little separation, and then you saw the other filly coming, but they fought really well to the wire. She's a good-sized filly. I did think she got beat on the wire watching the replay."

Right: Brazen Persuasion in the paddock. Winning jockey Rosie Napravnik said, "I didn't really like the fact that I was on the inside of the other speed, so they were kind of forcing us to go. But she broke so well and went along easy; I just tried to wait as long as I could even though I was kind of outrunning (Yes Liz). I'll tell you what, this little thing that I hit the wire with, she's about half the size of any of them." 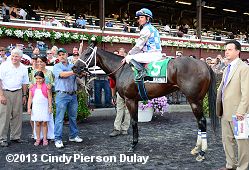 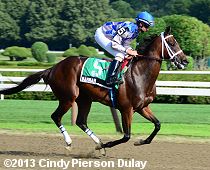 Left: Bahnah in the winner's circle. Winning trainer Bret Calhoun said, "It was a heck of a duel. (Brazen Persuasion) took a lot of pressure up there, hat's off to that horse, she ran a game race. I thought at one point when we stepped up to her, I would get on by. Then right there at the wire, I thought we might have got to her. When I saw the replay over and over, I thought it was a heater."

Right: Bahnah in the post parade. Winning jockey Corey Lanerie said, "Right before the wire, I felt I was edging right to her, but I didn't know if I got the bob or not. I thought I had maybe lost the bob. Both horses, neither one of them wanted to lose. At the 1/8 pole, I thought I was going to get her, because she was giving up, and at the 1/16 pole I thought she had me because I was giving up. Just neither one of them wanted to lose." 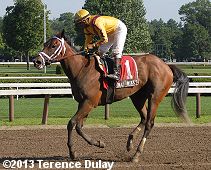 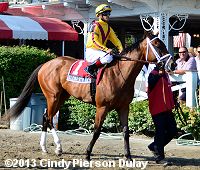 Left: Third place finisher Elena Strikes returns after the race. The 5-2 co-third choice raced in fourth early under jockey Javier Castellano, then put in a mild rally to get third beaten 1 1/4 lengths. The Todd Pletcher trainee improved her record to 1 win and 1 third in 2 starts, earning $39,000 for owner-breeder Stonestreet Stables.

Right: Fourth place finisher Yes Liz heads out for the post parade. The 5-2 co-third choice pressed the pace second and third under jockey John Velazquez, but tired late to finish fourth beaten 3 3/4 lengths. The Todd Pletcher trainee has a record record of 1 win, 0 seconds, and 0 thirds in 2 starts, earning $49,500 for owner-breeder Stonestreet Stables.