The feature race on the Saturday of the Saratoga opening weekend is the $300,000 TVG Coaching Club American Oaks (G1), featuring some of the top 3-year-old fillies going 1 1/8 miles, one complete lap of the main track. The 19,138 fans in attendance enjoyed mostly sunny skies and temperatures in the mid 80's, with intermittent rain showers late in the card. Unlimited Budget was sent off as the 6-5 favorite in the field of 5, exiting a 6th place finish in the Belmont Stakes (G1) after finishing 3rd in the Kentucky Oaks (G1). In to challenge her included 2-1 second choice Princess of Sylmar, winner of the Kentucky Oaks, and 5-2 third choice My Happy Face, winner of the Lotka Stakes last out.

Jockey Joel Rosario sent My Happy Face to a clear lead first time by and she set easy fractions of 24.60, 48.98, and 1:12.94 over the good main track while stalked by 13-1 longest shot Marathon Lady to her outside and Unlimited Budget on the rail. Entering the stretch, Unlimited Budget faded to last, as Princess of Sylmar, who was last for the first 5/8, easily took over the lead. Kept to task by jockey Javier Castellano through 1 mile in 1:37.83, she powered away to a 6 length win over My Happy Face in 1:51.07. It was another 1 3/4 length back to Marathon Lady third, while favorite Unlimited Budget was last. 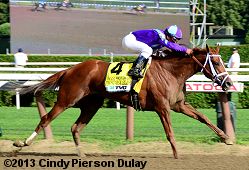 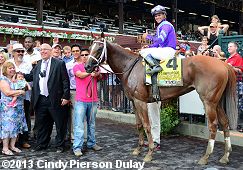 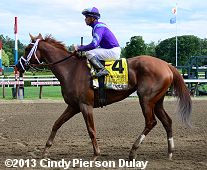 Left: Princess of Sylmar in the winner's circle. Trainer Todd Pletcher said, "I thought she was always traveling really well. There wasn't a lot of pace in there and they were tightly bunched. We made a mistake in the Gazelle when we felt like Close Hatches was the only speed. We kind of took her out of her running style, so I told Javier regardless of the pace, don't do that, just let her find her rhythm. I think she's got a very strong closing kick regardless of the fractions; just let her do her thing."

Right: Princess of Sylmar heads returns after the race. Jockey Javier Castellano said, "I really liked the way she did it. It was a great performance today. She ran like the best horse in the race. I'm really proud of her. She's a come-from-behind horse. There was a lot of speed in the race, and they hooked up. The biggest thing was it was a small field today, and she was able to come from behind. She did a great job. It's amazing. I was on the right filly. It was my second winner today and my first Grade 1 for the meet. I'm looking forward big-time and I hope I can get many more." 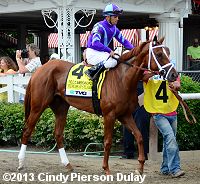 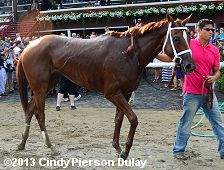 Left: Princess of Sylmar heads out to the track before the race.

Right: Princess of Sylmar heads back to the barns. Trainer Todd Pletcher said, "We had a choice to make in February whether to bring her down to Florida. Honestly, people who were at Aqueduct this winter were more impressed than the people who don't pay close attention to Aqueduct. So, maybe even though they were not really against the best fillies in the country, they were very impressive performances. I think everyone kind of lost sight of the fact that going into the Kentucky Oaks, it was billed as the best Oaks we've seen in 25 years, this filly wins it and gets virtually no respect. I think today she put herself at the top of the leader board, and now everyone understands that the Kentucky Oaks was a real race." 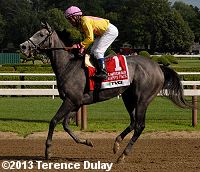 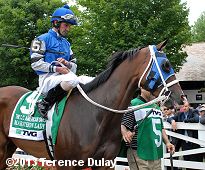 Left: Second place finisher My Happy Face returns after the race. Jockey Joel Rosario said, "Perfect trip. We were second best. She went good, relaxed really nicely, and she was keeping going. The winner was just much the best. She didn't quit. She was turning for home and still trying. I feel like she gave me a good ride."

Right: Third place finisher Marathon Lady in the paddock. The 13-1 longest shot stalked the pace under jockey Robby Albarado, then tired late to get third beaten 7 3/4 lengths. The Steve Hobby trainee improved her record to 1 win, 3 seconds, and 3 thirds in 8 starts, earning $263,100 for owners Alex and JoAnn Lieblong. 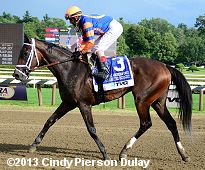 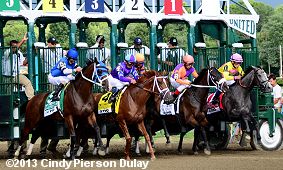 Left: Beaten favorite Unlimited Budget returns after the race. Trainer Todd Pletcher said, "She missed the break completely and Johnny (Velazquez) had to hustle her into a spot on the inside, and it just all went wrong right at the start. We were anticipating being in a close stalking position with her, and that all went wrong."

Right: The fillies break from the gate for the Coaching Club American Oaks.

Immediately before the Coaching Club American Oaks, a field of 6 older fillies and mares contested the $200,000 84 Lumber Shuvee Handicap (G3), also at 1 1/8 miles on the main track. La Troienne Stakes (G2) winner Authenticity was sent off as the 1-2 choice off her close second in the Ogden Phipps (G1). In to challenge her included 4-1 second choice Eblouissante, the half-sister to Zenyatta making her stakes debut off her two wins so far, her debut at Hollywood in November and an allowance at Santa Anita in January, and 6-1 third choice Flashy American, winner of the Iowa Distaff at Prairie Meadows.

Eblouissante was unruly at the gate, sitting down in the starting stall requiring jockey Rosie Napravnik to dismount. When the gate opened, Eblouissante bumped with 27-1 longest shot Moon Philly while jockey Jose Lezcano sent 8-1 Sea Island to the front. Sea Island set slow fractions of 25.46, 50.80, and 1:15.03 while pressed by Authenticity to her outside. At the top of the lane, Sea Island tired allowing Authenticity to inherit the lead through 1 mile in 1:39.63. Flashy American, fourth early put in a late rally but Authenticity easily held her off by 1 length for the win in 1:52.33. It was another 2 1/4 lengths back to pacesetting Sea Island third, while Eblouissante checked in last, beaten 30 1/4 lengths. 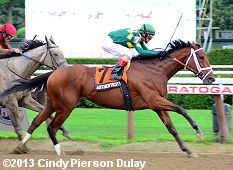 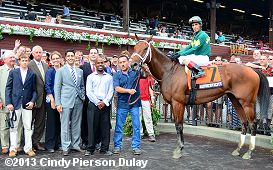 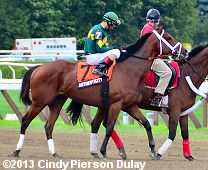 Left: Authenticity in the winner's circle. Winning trainer Todd Pletcher said, "It was pretty straightforward. We had a favorable post. You can put her on the lead, you can let her stalk, take her back if you wanted to. The main thing is we wanted her to be in a nice, comfortable rhythm. It's been really hot the last few days and we felt like shipping to Delaware could maybe compromise her later in the year. We have a favorable setup here at Saratoga; we love to win here and maybe this sets her up well for the Personal Ensign."

Right: Authenticity behind the starting gate. Jockey John Velazquez said, "I knew it was going to be a slow pace, but I didn't want to be on the lead, either. I kind of eased off from the other horse and got her to relax. By the 3/8 pole she got into that nice rhythm, and she did it pretty easy. I didn't want to be on the lead because I know when she gets to the lead she's going to be waiting. I kind of hit her a couple of times when I saw (Flashy American), and she went on easy." 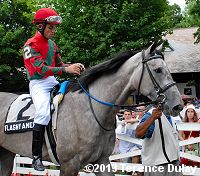 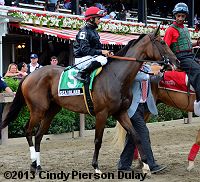 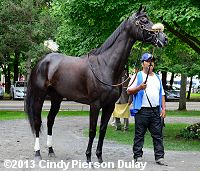 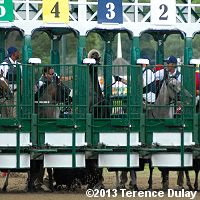 Left: Eblouissante poses for the fans in the paddock. She definitely knows how to play up to an audience like her half sister Zenyatta did.

Right: Eblouissante acting up in the gate. She actually sat down on her butt after she reared up. Jockey Rosie Napravnik said, "It was a long wait in the gate, and she got a little nervous and started acting up."