The feature race on Sunday of the Saratoga opening weekend is the $200,000 Sanford Stakes (G2) for 2-year-olds sprinting 6 furlongs on the main track. Just 20,281 were on hand on a warm sunny afternoon with temperatures in the mid 80's. After 1 scratch, a field of 6 went to post with Debt Ceiling sent off as the 9-5 favorite, undefeated in three starts, his debut at Laurel, the Rollicking Stakes at Pimlico, and the Bashford Manor (G3) at Churchill. In to challenge him included 9-4 second choice All in Blue, a debut winner by 6 lengths at Belmont last out, and 7-2 third choice Jake's Magic Hat, also coming off a debut win at Belmont.

9-2 Hollywood Talent and 7-1 Wired Bryan battled for the lead for the first 1/2 mile through fractions of 22.40 and 45.31 while stalked by All in Blue. Entering the stretch, Wired Bryan pulled away from the tiring Hollywood Talent, getting 5/8 in 57.70, and finished up 5 1/4 lengths in front of late-running 24-1 longest shot Southern Blessing in 1:11.06 over the fast main track. It was another 1 1/2 lengths back to Hollywood Talent third, while favorite Debt Ceiling finished last. 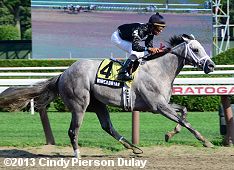 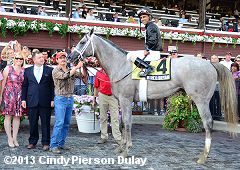 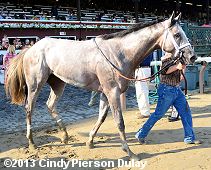 Left: Wired Bryan in the winner's circle. Winning trainer Mike Dilger said, "Today is my first stakes winner and first stakes runner. Sorry, I'm hoarse. I was cheering a little bit. He's New York bred; there were no restricted stakes races until later on in the year. The timing fit to run him here. I told Shaun to be close and if he was on the lead, that's fine. He's very relaxed in the gate; he breaks super sharp; that early speed is his weapon. So, rather than tell him to sit handy and make a run, let the horse do what's natural for him. I was a little nervous when he got headed, when Joel came up on his outside. I have to admit I was a bit nervous at that point. Shaun came back and said he's not a one-dimensional horse. He's a horse that can rate if we need him to. We learned a lot from the horse today."

Right: Wired Bryan heads back to the barn after the race. Wired Bryan earned $220,000 for the victory, including a $100,000 bonus NYRA is awarding to any 2-year-old maiden winner at Aqueduct or Belmont during the spring or summer who goes on to win a graded stakes race at a NYRA track in 2013. 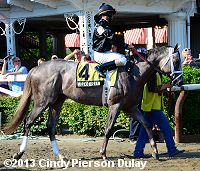 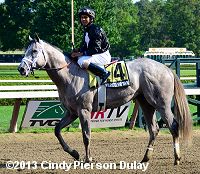 Left: Wired Bryan heads out for the post parade. Jockey Shaun Bridgmohan said, "You can see what a phenomenal job Mike's done with this horse. He was a total professional. He left the gate running and he had running on his mind. For a young horse to be down on the fence like that – he got passed around the turn and he showed enough heart to come back and put them away late. He's a pretty decent little horse. He did relax pretty good. I told Mike I don't think he's strictly a speed horse and has to be on the lead; I think he'll settle and that will make him more effective. He's a very smart horse. I'm happy I was the chosen pilot." 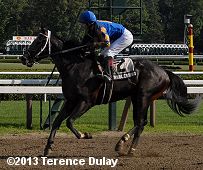 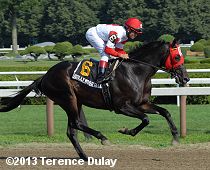 Left: Second place finisher Southern Blessing returns after the race. The 24-1 longest shot was unhurried early under jockey Rosie Napravnik, rallied well but was no match for the winner. The Steve Asmussen trainee improved his record to 1 win and 1 second in 2 starts, earning $67,000 for owner Mike McCarty.

Right: Third place finisher Hollywood Talent in the post parade. The 9-2 fourth choice contested the pace early, but tired in the stretch to finish third beaten 6 3/4 lengths. The Wesley Ward trainee improved his record to 1 win, 1 second, and 1 third in 3 starts, earning $68,115 for owner-breeder Ken and Sarah Ramsey. 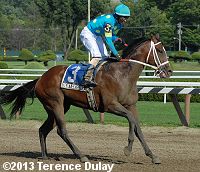 Sixth place finisher and beaten favorite Debt Ceiling crosses the finish line last. Jockey Eric Camacho said, "I broke nice. He's a nice horse, and he started to get a little aggressive behind other horses. He got me in a bad spot around the turn, and I had to snatch him up and take him back. I still was sitting in a perfect position, but when we came to the 3/8 pole I was already under a drive. I was out of horse. He's chased fast paces and he's run into fast paces before, but today just wasn't his day." 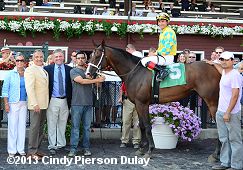 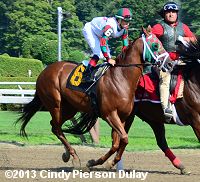 Left: Strong Impact in the winner's circle. Winning trainer Bruce Brown said, "He really ran a great race, and he's come around this year better than ever. This is a good win for Mr. (Tom) La Marca (owner); this is the second one we've won a stakes with. It's gratifying." Jockey Alex Solis added, "I waited to the 1/4 pole, and I thought my best chance was to just save all the ground and save horse for the end, and it worked out good. My horse was coming, and it looked like that other horse was getting a little tired. That last 1/8, I thought I had a good chance."