Due to unknown reasons but likely caused by the unusual rains that have fallen this winter in Arcadia, Santa Anita's main dirt track has experienced 21 equine fatalities during the 2018-19 winter/spring meeting. The latest fatality was Lets Light The Way, a 4-year-old filly who was the 4th death related to training since February 23. There have been no fatalities on the training track during this time. Track management announced on Tuesday, March 5, that racing and training would be suspended indefinitely in order to evaluate the safety of the main track. As a result, the Santa Anita Handicap (G1) card on Saturday, March 9, was a cancelled, with the 4 stakes races postponed to later dates. This includes the San Felipe Stakes (G2), the major local prep for the Santa Anita Derby (G1) and worth 50 points to the winner as part of the Kentucky Derby Championship Series. Stronach Group CEO Tim Ritvo said, "The safety, health and welfare of the horses and jockeys is our top priority. While we are confident further testing will confirm the soundness of the track, the decision to close is the right thing to do at this time." 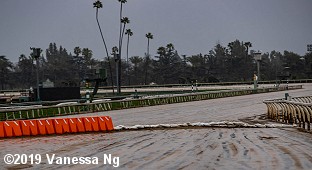 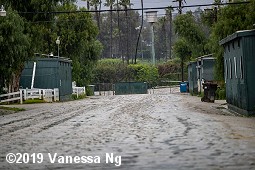 Due to the closure, horses stabled at Santa Anita have been limited to walking in the barn areas for 2 days, with the training track expected to reopen for light training only (no timed works) on Friday. Trainer Bob Baffert said, "Like all athletes horses need to stay active, so this is a good decision for their overall health since it allows our horses to get out of their stalls and keeps them moving to aid their digestion." 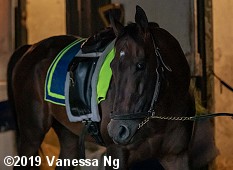 McKinzie finished a close second in the San Pasqual (G2) to Battle of Midway, who broke down after a 5 furlong workout on February 23 and was euthanized. McKinzie was assigned the high weight of 123 pounds for the Santa Anita Handicap (G1). 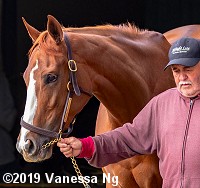 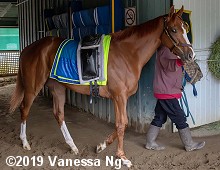 Chasing Yesterday, the half-sister to American Pharoah, worked 6f in 1:17 on Tuesday, before the track was closed by management. The Starlet (G1) winner is an 8-1 co-second choice on the morning line in the Kentucky Oaks Future Wager and was supposed to make her first 3-year-old start in the Santa Ysabel (G3) on Sunday. "I'm excited to see her run," trainer Bob Baffert said. "They're always going to be tough out here, but right now I think she's doing better than she ever has. She's improving. I think she's moving forward off her 2-year-old (season). And that's the thing — you want to see if there's any movement." 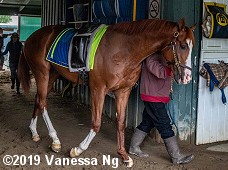 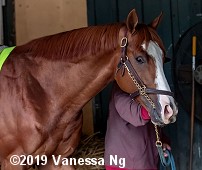 Improbable, winner of the Los Alamitos Futurity (G1) is one of several Triple Crown contenders in Bob Baffert's barn. He is an 8-1 co-third choice in Kentucky Derby Future Wager Pool 3, and was supposed to go in the San Felipe. Baffert will work him out at Los Alamitos on Sunday, with his next start to be either the rescheduled San Felipe, the Rebel at Oaklawn, or the Sunland Derby. 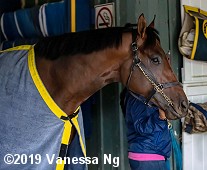 Game Winner, undefeated winner of the Breeders' Cup Juvenile (G1) is the 5-1 second choice (after the mutuel field) in Kentucky Derby Future Wager Pool 3. He was supposed to make his 3-year-old debut in the San Felipe. Trainer Bob Baffert may work him out at Los Alamitos on Sunday, and will go in the San Felipe if it it run by next Saturday, otherwise he may hae to go to the Rebel or the Sunland Derby. Baffert said, "As far as the San Felipe goes, I'm just waiting to hear more information. I'm sending a lot of my top horses to Los Alamitos. I'm sending all the ones that I need to work right now." Unlike many trainers at Santa Anita, Baffert also has stalls at Los Alamitos. 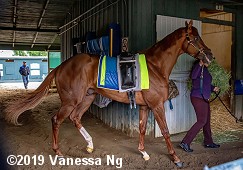 Mucho Gusto worked 5f on Tuesday in 1:00.20 and was expected to start in the San Felipe. The Robert B. Lewis (G3) winner is 20-1 morning line in Kentucky Derby Future Wager Pool 3, and was supposed to go in the San Felipe. Trainer Bob Baffert will instead enter him in the Rebel (G2) at Oaklawn next Saturday. He said, "I'm trying to adapt. There is so much confusion going on." 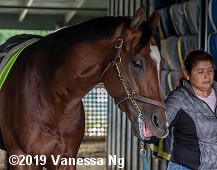 Dessman worked 6f in 1:13.80 on Tuesday and was expected to start in the San Felipe. The San Vicente (G2) runner-up is likely to ship to Oaklawn for next Saturday's Rebel Stakes (G2). 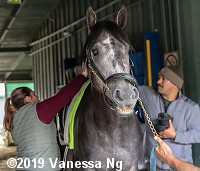 Roadster won an allowance race at 1 mile on March 1 by 2 1/2 lengths in 1:37.53. Trainer Bob Baffert said, "I was relieved that we got a good race into him. We thought we had him pretty tight. He caught another gear when he turned for home. He passed the two-turn test." He will train up to the Santa Anita Derby (G1).