The 95,760 fans in attendance at Pimlico for the Preakness Stakes were treated to a marathon 13-race card of racing with the first race off at 10:45am. Mostly sunny skies were the order of the day with temperatures in the mid 70's and a light breeze, making for ideal racing conditions over the fast main track and firm turf, despite heavy rains overnight. 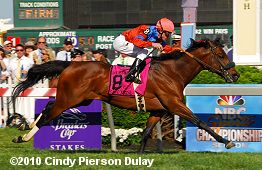 A field of 12 older horses competed in the $150,000 Dixie Stakes (G2) over 1 1/8 miles on the turf. Grassy was sent off as the 7-2 favorite off a second place finish in an allowance last out, over 4-1 second choice Just As Well off a 4th place effort in the Ben Ali, and 5-1 third choice Rahystrada, an allowance winner at Keeneland on April 9.

Ramon Dominguez sent 14-1 Strike a Deal to the lead getting early fractions of 23.94, 48.23, and 1:12.79 over the firm course saving ground around both turns. 10-1 Nicanor stalked him 1 1/2 lengths behind. Entering the stretch, Strike a Deal accelerated away from the field to open a 2 length lead through 1 mile in 1:36.24. Just As Well put in a strong rally from 7th early but Strike a Deal held him off late to win by 3/4 length in 1:47.81. It was another 1/2 length back to Rahystrada third, while favorite Grassy raced in 10th early and showed no rally, finishing 10th beaten 5 3/4 lengths.
Full results chart from DRF 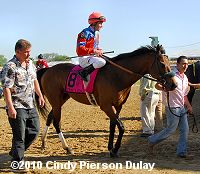 Strike a Deal heads to the winner's circle. Darren Silvers, assistant to winning trainer Alan Goldberg said, "The horse doesn't usually show speed, but today, with the speed on the outside, we had to get position. The horse showed a turn of foot to go to the lead and he was comfortable there. He stole the race."

His jockey Ramon Dominguez said, "He was certainly ready to run today. Alan Goldberg did a great job with him. He didn't give me any instructions. I saw fit to make the lead and my horse was eager to do it. Besides the 13, there wasn't a lot of speed in the race, so I said, ‘Let's go for it.' I was happy to get on him for a winning race." 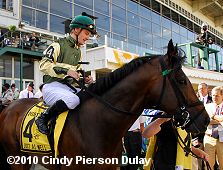 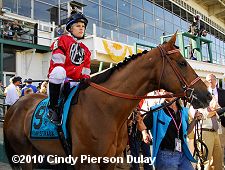 Left: Second place finisher Just As Well heads out for the post parade. His trainer Jonathan Sheppard said, "I thought he ran great. Julien gave him a good ride and we just got beat by a better horse on the day. Probably a little more distance wouldn't hurt him, but he ran well. He's back where he was, that's the main thing. We're happy." Jockey Julien Leparoux added, "I got a perfect trip, really. I started behind and followed (Rahystrada). He came out in the stretch and kept on coming for me. He just might need a little more distance like he did before. He tried very hard today."

Right: Third place finisher Rahystrada heads out for the post parade. His trainer Byron Hughes said, "The horse on the lead just got out, had it easy and had his own way. It certainly didn't help us at the end. He ran good. We're happy. Usually he stays right behind the leaders and comes on. He just didn't have it in him today." Jockey Inez Karlsson added, "I was very happy with this horse. I was hoping they were going to press a little bit more on the front end, because Ramon just got to sit there without any pressure from the outside horse. I'd have rather have seen him pressed a little bit, because my horse was really game. Turning for home, he kicked off great." 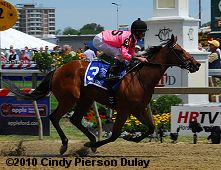 The first stakes race on Preakness Day was the $100,000 Chick Lang Stakes (G2) for 3-year-olds sprinting 6 furlongs on the main track. 7-10 favorite Comedero battled for the lead with 5-2 second choice Quiet Invader down the backstretch through fractions of 23.51 and 46.00. Entering the stretch, Comedero drew off, opening up a 4 length lead at the 1/8 pole through 5/8 in 57.76. 9-1 Latigo Shore put in a late rally but was left with too much ground to recover as Comedero cruised under the line 3 3/4 lengths in front in 1:10.16. It was another 2 1/2 lengths back to Quiet Invader third.
Full results chart from DRF 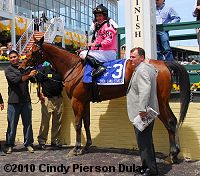 Comedero in the winner's circle. His trainer Michael Stidham said, "They can't keep up with him. When I saw the first quarter – 23-and-change – it made me feel great. Baffert's horse (Quiet Invader) had to be pushed a little just to keep up with him. This is a really fast horse with a lot of upside." Jockey  Robby Albarado added, "He's fast. Obviously we don't know how far he's going to go, but 3/4 or 7/8 is right up his alley. He goes very fast and finishes well. He does everything within himself with ease." 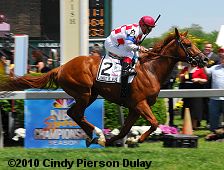 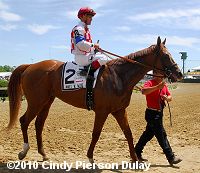 Beau Choix heads to the winner's circle. His trainer Barclay Tagg said, "It was exactly the way I wanted it to go. He broke good; he stayed where I wanted him to stay; and he was in a nice stalking position. It was a bit of a jump for him, because most of these horses have won their allowance conditions and he hadn't yet. But he's been training very well. I just had a good feeling about him." Jockey Javier Castellano added, "That's where I wanted to be, in that spot, off the speed. There was plenty of speed in the race and my horse was a stalker. I just wanted to swing around turning for home, and he finished very strong. I dropped my rein on the left side and tried to grab it. And at the same time I grabbed it, I lost the other one. It was a mess." 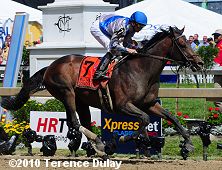 The $100,000 William Donald Schaefer Stakes (G2) saw a field of 7 older horses go 1 1/16 miles on the main track. 2-1 second choice Understatement set the early pace of 24.00, 48.38, and 1:12.14 while being stalked by 16-1 Timber Reserve the whole way. Into the stretch, Understatement faded to eventually finish last while 6-5 favorite Blame came through between horses to get the lead. He drew off late to win by 1 1/2 lengths over late-running 24-1 No Advantage in 1:43.40. It was another 1/2 length back to Timber Reserve third.
Full results chart from DRF 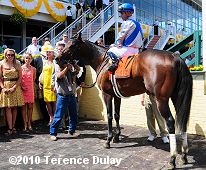 Blame in the winner's circle. His jockey Garrett Gomez said, "The pace was OK going up the backside, but Johnny (Velazquez aboard Understatement) tried to slow it down and I was right on top of them. He was tracking well and we had to wait a little bit until things settled. He went between them and gave me a big finish." Trainer Al Stall added, "We knew he was ready to run, but that doesn't mean anything until you actually see it. We're happy to see him back in form. Garrett had to use him to get through that hole a little bit, but he got a lot out of it on a deepish racetrack. It looks like we're going to the Stephen Foster." 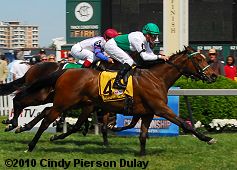 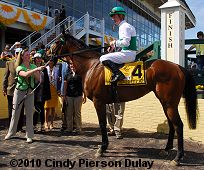 Rainbow View in the winner's circle. Her trainer Jonathan Sheppard said, "Everything was great up until about the mid-point on the turn. Then she kind of got jostled around. And even into the stretch, there was a little bit of bumping. She handled it, I thought, very well. (Leparoux) didn't panic. Some people might have. He's pretty chilly." Jockey Julien Leparoux added, "I thought she was comfortable all the way around the track. She kind of checked out a little bit around the 1/4 pole. That kind of scared me a little. She finished good. She's got a very nice kick. She was much the best today." 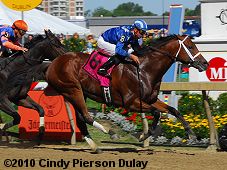 The $100,000 Maryland Sprint Handicap (G3) is for older sprinters going 6 furlongs on the main track. Jockey Eibar Coa sent 13-1 Taqarub to the front to set the pace, getting fractions of 23.03 and 45.57 while being stalked by 20-1 Despite the Odds. On the turn, Despite the Odds tired allowing Taqarub to open up a 1 1/2 length lead in mid-stretch through 5/8 in 57.33. 5-1 Roaring Lion came through on the rail but Taqarub easily held him off by a length to win in 1:10.02. It was a head back to 5-1 Ravalo third, while 2-1 favorite Snapshot disappointed in fifth.
Full results chart from DRF 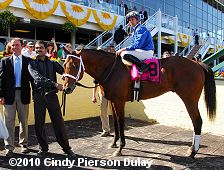 Taqarub in the winner's circle. His jockey Eibar Coa said, "Actually I was kind of surprised that somebody wasn't after him. There were a lot of horses with speed in here on paper. I got out there and waited for someone to come by me, but they never did. I wanted to be close, but I just kind of inherited the lead." Andrew St. Lawrence, assistant to trainer Kiaran McLaughlin added, "He broke sharp and got right up there. Speed seems to be holding pretty well today. I think it suits this horse. He's a pretty talented animal. As a 2-year-old turning 3, he was very good on the dirt at Aqueduct, so we weren't entirely surprised by this run today."