The feature race on Saturday at Belmont Park was the $200,000 Peter Pan Stakes (G2), a local prep for the Belmont Stakes. After likely Preakness Stakes entrant Isn't He Perfect was scratched, a field of 10 three-year-olds contested this 1 1/8 mile trip around 1 turn of the main track before 6,386 fans, under overcast skies with temperatures in the mid 60's. Adios Charlie was sent off as the lukewarm 3-1 favorite off two straight wins, a maiden in March at Gulfstream and then the Jerome Stakes (G2) at Aqueduct in April. In to challenge him included 7-2 second choice Alternation, fifth in the Arkansas Derby after winning an allowance at Oaklawn, and 4-1 third choice Uncle Brent, winner of the Northern Spur at Oaklawn last out.

Jockey Channing Hill sent 31-1 longshot Bold Deed to the lead exiting the chute and he set fractions of 23.78, 47.14, and 1:11.90 while as many as 2 1/2 lengths in front of Adios Charlie and 9-1 Prime Cut. Entering the stretch, Bold Deed tired allowing Adios Charlie to inherit the lead, opening up a 2 length advantage over Prime Cut through a mile in 1:36.87. Alternation, who was as far back as 7th early, came out 4 wide for the drive and closed well to catch Adios Charlie inside the 1/16 pole to prevail by a head in 1:49.53 over the fast track. It was a long 4 1/2 lengths back to Prime Cut third. 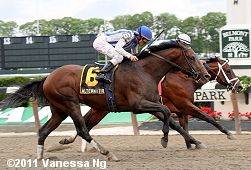 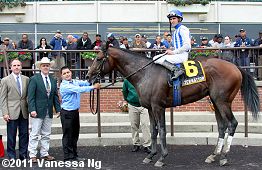 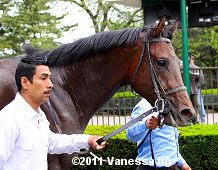 Left: Alternation in the winner's circle. Winning trainer Donnie Von Hemel said, "Any time we have a chance to come back here and run at Belmont, it's going to be difficult race. Ramon has ridden for Pin Oak before, and he's the top man up here. When we decided to come, we decided to give Ramon a call. Steve Rushing, his agent, said 'yes,' so that was like, 'We must have a pretty good shot!' We'll probably go back to Arlington, but we'll certainly keep all of our options open."

Right: Alternation heads back to the barn after the race. 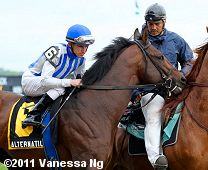 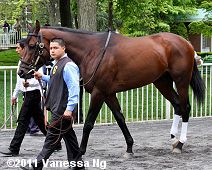 Left: Alternation in the post parade. Winning jockey Ramon Dominguez said, "The front wasn't really coming back at all and my horse just kept grinding and tried pretty hard. I was very impressed. He's a beautiful, big animal and they told me before the race, 'You'll be surprised; when you ask him, you'll get horse right away. It's not like he takes a couple strides.' Sure enough, around the 1/2 mile I had to kind of smooch him to get through on the rail. He responded and then I had to kind of slam on the brakes because I had nowhere to go once I got through. It was good to see that as big as he is, he's also got tactical speed and more than one gear."

Right: Alternation in the paddock before the race. 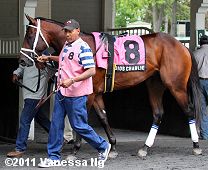 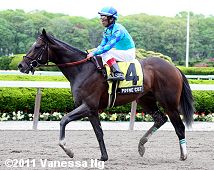 Left: Second place finisher and beaten favorite Adios Charlie in the paddock before the race. His jockey Rajiv Maragh said, "It was a tough beat. He's a resilient horse. The tougher the competition gets, the more he will give you." Trainer Stanley Hough added, "We were really happy with his race. They went pretty fast. We'll probably look ahead at something like the Jim Dandy or the Haskell, with a race before that."

Right: Third place finisher Prime Cut in the post parade. The 9-1 shot stalked the pace on the inside early under jockey Edgar Prado, came out for run but could not improve position to finish 3rd beaten 4 1/2 lengths. The Neil Howard trainee improved his record to 2 wins, 2 seconds, and 2 thirds in 7 starts, earning $123,685 for owner Donald Adam.