The highlight race of the Oaklawn Park spring meeting is the $1 million Arkansas Derby (G1), a major prep for the Kentucky Derby run at 1 1/8 miles on closing day. The crowd of 62,634 enjoyed sunny skies and temperatures in the mid-70s. The Factor was sent off as the 4-5 favorite in the field of 13 off his 3-race winning streak including the San Vicente (G2) in February and the Rebel (G2) in March, the major local prep for this race. In to challenge him included 6-1 second choice Sway Away, second in the San Vicente and 6th in the Rebel, and 13-2 third choice Elite Alex, fourth in the Louisiana Derby (G2) after finishing third in the Southwest (G3).

Jockey Clint Berry sent 33-1 J P's Gusto to the lead first time past the stands and he set quick fractions of 22.54, 46.53, and 1:11.22 over the fast track while uncontested 2 lengths in front of 29-1 Dance City second, who in turn was a length in front of favorite The Factor who sat third. On the far turn, J P's Gusto tired as Sway Away, 5th early, came through to take a short lead over Dance City at the 1/8 pole, getting 1 mile in 1:36.18. 25-1 Archarcharch, 10th early and wide throughout, closed late to win, holding off 10-1 Nehro by a neck in 1:49.34. It was another 1 1/2 lengths back to Dance City third, while favorite The Factor tired late to finish 7th. There was a stewards' inquiry into the stretch run due to some bumping between Dance City and Sway Away, but the result stood.

Also check out Havre de Grace winning the Apple Blossom and Smiling Tiger winning the Count Fleet Handicap during the Racing Festival of the South at Oaklawn. 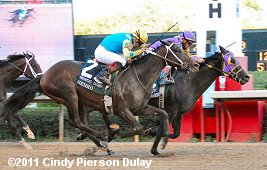 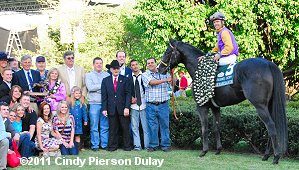 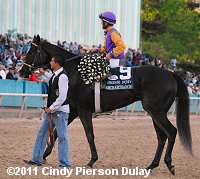 Left: Archarcharch in the winner's circle. His owner Robert Yagos said, "This horse is something special. Jinks gave us confidence in this horse since day one. We haven't gotten to take a deep breath since he crossed the wire. Jon and Jinks and the whole barn have done a great job with Archarcharch. This is a big thrill for the family and everyone involved. We're looking good now."

Right: Archarcharch parades for the fans after the race. His trainer William "Jinks" Fires said, "Very, very proud. He had the perfect trip. I was happy to see someone go out there with the speed. That was what we were hoping for. I have a lot of belief in this horse. He's done everything right from the beginning." This was Fires' first Arkansas Derby victory. 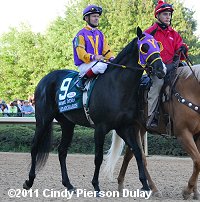 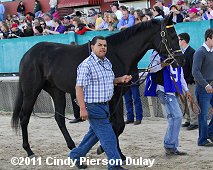 Left: Archarcharch in the post parade. His jockey Jon Court said, "This has just been a dream come true. We had a good start. We had a great position, he didn't get banged up this time and I was able to execute the plan. Last time, we just had to go because no one else went with The Factor. This time, we were able to sit back and watch the speed duel unfold. We're just so excited. Winning for Mr. Yagos and my father in law (Fires) makes it all that much sweeter. Kentucky Derby here we come." He is the first jockey since Garrett Gomez in 1994-1995 to win consecutive Arkansas Derbys.

Right: Archarcharch heads over from the barns before the race. 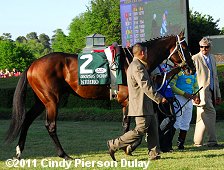 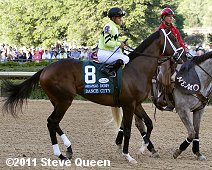 Left: Second place finisher Nehro in the walking ring before the race. His trainer Steve Asmussen said, "It's kind of been that kind of year (two seconds in a row). He ran fabulous. They stood in the gate forever (because of the delay). He's a very good horse and he stood there, but it was a long time. There was all that traffic and he came running late. I'm very proud of him. I think he showed some quality today. All the pace in the race suited us today. He tried like heck."

Right: Third place finisher Dance City in the post parade. The 29-1 shot stalked the pacesetter under jockey Javier Castellano, was bothered at the 1/8 pole but held on to get third beaten 1 3/4 lengths. The Todd Pletcher trainee improved his record to 2 wins, 1 second, and 1 third in 4 starts, earning $160,900 for the estate of owner-breeder Edward P. Evans. 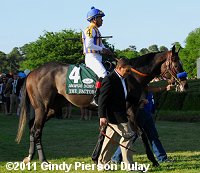 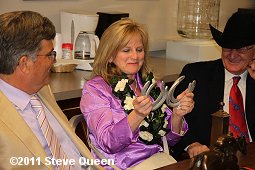 Left: Seventh place finisher and beaten favorite The Factor in the walking ring. His trainer Bob Baffert said, "I think (Garcia) tried to take him out and teach him something today, but he wasn't comfortable with that. When they sent hard and then they squeezed him down on the rail Martin had to grab him. I think he displaced. They'll displace if you grab them too hard. So he came back, and all the sudden you could hear him, the breathing, gurgling up I'm going to see how he is. I'm upset that he didn't get a chance. I'm just going to go back and lick our wounds, and we'll be alright. There's other things down the road."

Right: Owner Loval Yagos shows off Archarcharch's shoes from his win in the Southwest Stakes which she carried in her purse today for good luck.

Left: The jockeys for the Arkansas Derby pose before the race.

Right: The horses break from the gate for the 2011 Arkansas Derby. 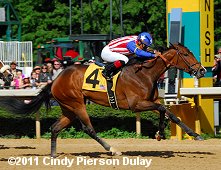 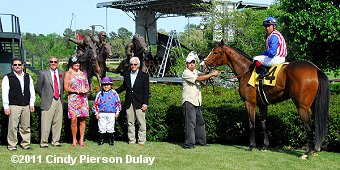 There were two ungraded stakes races on the undercard. The first stakes race on Arkansas Derby day was the $100,000 Instant Racing Stakes for 3-year-old fillies going 1 mile. May Day Rose was the 6-5 favorite in the field of 7 off her 5th place finish in the Santa Anita Oaks (G1), over 8-5 second choice Dixie City, third in the Honeybee (G3) last out, and 6-1 third choice Hearts on Fire off an allowance win.

Winning jockey Martin Garcia said, "She gave me a great run." The Bob Baffert trainee improved her record to 4 wins, 1 second, and 0 thirds in 8 starts, earning $264,555 for owner Kaleem Shah. 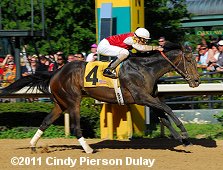 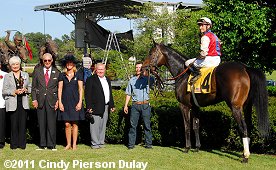 The $100,000 Northern Spur Stakes featured a field of 8 three-year-olds going 1 mile. Albergatti was sent off as the 8-5 favorite off a 9th place finish in the San Felipe (G2), over 7-2 second choice Uncle Brent, 2nd in an allowance last out, and 4-1 third choice Commander, off an allowance win.

Uncle Brent was purchased by Charles Cella and moved to the barn of trainer Lynn Whiting after his debut win. Whiting said, "It vindicated the purchase. He won nicely." The 7-2 second choice settled fourth 4 lengths back early under jockey Joe Rocco Jr., came through on the rail and drew off to win by 1 3/4 lengths. He improved his record to 2 wins and 1 second in 3 starts, earning $91,000 for owner Charles Cella.