The $100,000 Poker Handicap (G3) closed out the stakes action at Belmont Park this weekend. A field of just five older horses contested this 1 mile trip over the Widener turf course, before just 7,136 fans on a sunny and warm Sunday afternoon. As expected, 2007 Breeders' Cup Mile winner Kip Deville was sent off as the 2-5 choice, coming into the race off a two-race win streak, including the Breeders' Cup Mile in October and the Maker's Mark Mile at Keeneland in April. In to challenge the Richard Dutrow trainee were 3-1 second choice Tam Lin from the Godolphin stable, winner of the Scottish Monk Stakes at Belmont time out, and 6-1 third choice Operation Red Dawn, winner of an allowance last time out after finishing second in the Fort Marcy Handicap in April at Aqueduct.

Favorite Kip Deville on the outside battled for the lead with 19-1 longest shot Sensational Humor along the rail, through fractions of 24.36, 47.32, and 1:10.20 down the backstretch and around the far turn. Tam Lin stalked the pace in third, about 3 lengths in front of the rest of the field. Entering the stretch, jockey Cornelio Velasquez asked Kip Deville for run and got it, as the favorite quickly opened up a 2 length advantage at the 1/8 pole over the tiring Sensational Humor. Kip Deville cruised under the line 2 3/4 lengths in front of Tam Lin, completing the mile trip over firm turf in 1:32.94. It was another 2 lengths back to late-running Operation Red Dawn third. 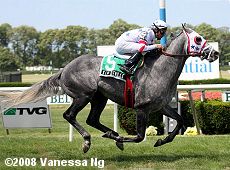 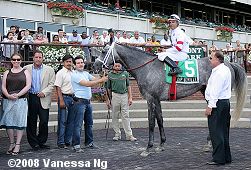 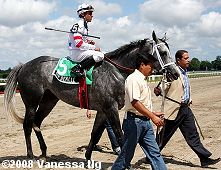 Left: Kip Deville in the winner's circle. Winning trainer Richard Dutrow Jr. (by his hip) said, "Kip likes to set off; that's his game. He found himself on the lead, and then Cornelio was able to keep him right in striking distance. His next race will be in Canada (Woodbine Mile; September 7) and it looks like what we have to do is keep him where he is at."

Right: Mike Iavarone (tan jacket) of winning owner IEAH Stable leads Kip Deville to the winner's circle. Iavarone said, "He's a super racehorse. We've been running all over the place with him, and we're happy to get him to New York. He loves this turf. Just look at his last quarter. He's got a great mind; a great everything." 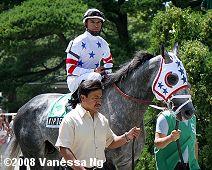 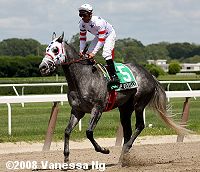 Left: Kip Deville heads out of the paddock before therace. Winning jockey Cornelio Velasquez said, "He broke sharp today, but I was able to settle him down. And he got the last quarter in 22 and change (22.74 seconds). This should set him up for the big race in Canada." 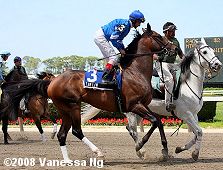 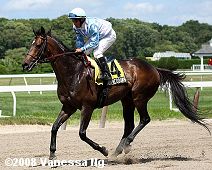 Left: Second place finisher Tam Lin in the post parade. The English-bred stalked the pace three wide in third position down the backstretch under new jockey John Velazquez, and finished well but was no match for the winner. The Saeed bin Suroor trainee improved his record to 5 wins, 3 seconds, and 2 thirds in 14 starts, earning $256,437 for owner Godolphin Racing LLC.

Right: Third place finisher Operation RedDawn returns after the race. The 6-1 third choice sat in fourth down the backstretch and saved ground on the turn under regular rider Alan Garcia, passing the tiring Sensational Humor inside the final furlong to get third place money. The Christophe Clement trainee improved his record to 4 wins, 8 seconds, and 3 thirds in 17 starts, earning $238,307 for owner-breeder Dion A. Recachina.