The $250,000 Maryland Lottery Pimlico Special (G1) is the first of two Grade 1 stakes events on Preakness weekend at Pimlico Race Course in Baltimore, contested before a crowd of just 18,407 due to the wet weather on Friday May 16. This 1 3/16 mile trip over the muddy main track featured a field of just seven older horses, after both A.P. Arrow and Wanderin Boy were scratched. Grasshopper was sent off as the lukewarm 2-1 favorite off of consecutive runner-up finishes in the New Orleans Handicap at the Fair Grounds in March followed by the Westchester at Aqueduct in April. In to challenge him were 5-2 second choice Gottcha Gold, winner of the Skip Away Handicap at Gulfstream Park in March, and 4-1 third choice Sir Whimsey, third in the Ben Ali at Keeneland after winning the Gulfstream Park Handicap in March.

Gottcha Gold went to the lead immediately under jockey Chuck Lopez, and he set a quick pace of 23.87, 47.46, and 1:11.39 over the muddy, sealed track, while as many as 1 1/2 lengths clear of the field. 12-1 Xchanger stalked the pace in second. Entering the stretch, Lopez asked Gottcha Gold to open up and he did, pulling away to a 2 1/2 length advantage at the 1/8 pole after a mile in 1:36.17. However, 7-1 Student Council, rated at the back of the field early on, came out five wide into the stretch and closed with a rush, passing the field and wearing down pacesetter Gottcha Gold inside the 70 yard pole to prevail by a neck in 1:54.87. It was a long 5 3/4 lengths back to Sir Whimsey in third. Favorite Grasshopper was wide throughout, settling in 4th down the backstretch, but showed no rally in the stretch to finish fifth.

Also check out the results for the Black-Eyed Susan Stakes (G2) and the other three stakes on the undercard. 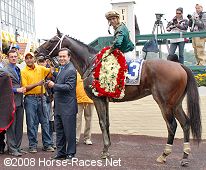 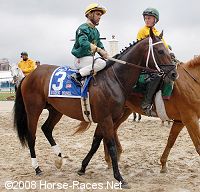 Left: Student Council in the winner's circle. Winning jockey Shaun Bridgmohan said, "There looked like there'd be a lot of speed in there. He's such a great horse and he's got such a great stride to him that midway down the backside he grabbed a hold of me and wanted to go. At that point, I had nowhere for him to go. I had to sit there and wait and bide my time and wait a little bit longer. I've been watching races all day. I didn't want to take him out of his game." 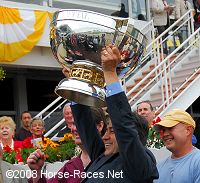 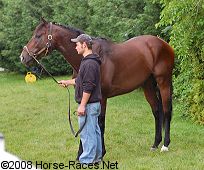 Left: Owner Ro Parra holds up the Pimlico Special trophy. Parra said, "We took him to Japan (for the Japan Cup Dirt) and in hindsight, I wish we hadn't. When he came back he was tired. We were disappointed in the Santa Anita Handicap. We thought we were going to win the race. Steve (Asmussen, trainer) had him ready for this race. I spoke to him just an hour before the race, and he told me to smile in the winner's circle."

Right: Student Council in the grass behind the stakes barn later in the day. 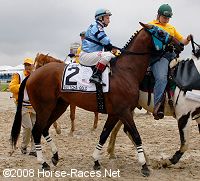 Second place finisher Gottcha Gold in the post parade. His trainer Eddie Plesa Jr. said, "I was hoping he would be able to get there, but by the time we got near the wire, it was too late. I was very satisfied with his race and Chuckie did a great job again."

His jockey Chuck Lopez said, "The horse ran his race I think. I was able to slow him down and give him the opportunity. I mean, the winner just came and got him." 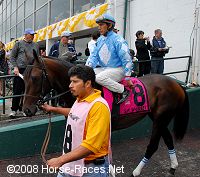 Third place finisher Sir Whimsey comes out of the paddock before the race. His trainer James Toner said, "He ran well. He tried hard and did everything right, but Edgar said he wasn't comfortable with the track. He tries hard, this horse. He gives you everything he's got."

His jockey Edgar Prado said, "He wasn't handling the track too well. He had a little trouble in the first part. He was trying, but in the second turn, two horses stopped in front of me, so I had to go around them. I think he could have been a lot closer, but we lost ground and momentum." 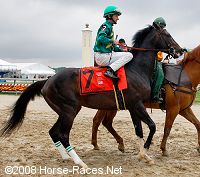 Fifth place finisher and beaten favorite Grasshopper lives up to his name in the post parade. His trainer Neil Howard said, "I don't think the track was a problem. I think he handled it OK. It just wasn't his day today. He'll come back and run like he can."

His jockey Robby Albarado said, "I have no excuse. I had a good trip and good spot. He just wasn't good enough today. That wasn't the real Grasshopper."

Also check out the results for the Black-Eyed Susan Stakes (G2) and the other three stakes on the undercard.