The feature race at Del Mar on Saturday was the $200,000 Pat O'Brien Stakes (G2) for older horses sprinting 7 furlongs on the main track and is a Breeders' Cup Challenge "Win and You're In" qualifier for the Dirt Mile. Conditions were excellent with partly cloudy skies and temperatures in the mid 70's. Kona Gold (G2) runner-up Moe Candy was sent off as the 3-1 favorite in the field of 10 off his 3rd place finish in the Bing Crosby (G1). In to challenge him included 7-2 second choice Silent Bird, 4th in the Triple Bend (G1), and 9-2 third choice Giant Expectations, second in allowance company last out.

Jockey Victor Espinoza sent Moe Candy to the lead exiting the chute and he set fractions of 22.69 and 45.14 while pressed by 19-1 Mr. Hinx and stalked by Silent Bird. Entering the lane Moe Candy tired as 15-2 Calculator, 8th early, moved up to gain a short lead through 3/4 in 1:08.83. Giant Expectations, 6th early under Gary Stevens, came out 6 wide for the drive and rallied to win going away by 1 1/2 lengths in 1:21.08 over the fast main track. It was another 2 3/4 lengths back to Silent Bird third. 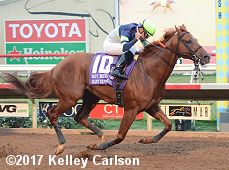 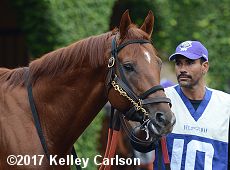 Left: Giant Expectations in the winner's circle. Winning trainer Peter Eurton said, "He showed up today and I'm really proud of him. Gary (Stevens) chose him over Kobe's Back basically because of the youth, this horse is four. I didn't think he would run this big, but I'm glad he did. We're pretty happy right now."

Right: Giant Expectations in the paddock. Winning jockey Gary Stevens said, "He broke sharp and he was right in it. I used one of his gears a little earlier than I wanted to to get position. There was some "jockeying" going on out there, especially between (Kent) Desormeaux (on Silent Bird) and me. We were going in and out, but my horse loved (the competition). He's a bulldog. I rode him last time and he ran great. I thought he was sitting on something big. He showed it today. And I think he'll actually be better off if they run him a mile. He'll have more time to settle going into that first turn and I expect he'll run big." 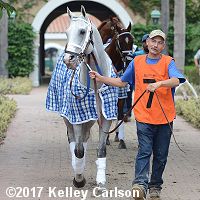 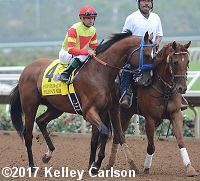 Left: Second place finisher Calculator heads into the paddock. Jockey Rafael Bejarano said, "He got away a little slow, but we got a good position pretty quick. He got through there, then threw his ears up. Then the winner was by us. He ran good, though."

Right: Third place finisher Silent Bird in the post parade. Jockey Kent Desormeaux said, "He showed up. The fastest race of the meet by far and he was right there. Hadn't run in more than five months, but he was right with them today." 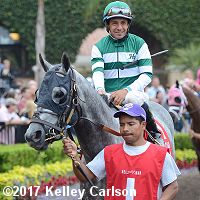 Last place finisher and beaten favorite Moe Candy in the paddock. The John Sadler trainer has a record of 3 wins, 3 seconds, and 3 thirds in 11 starts, earning $241,625 for owner Hronis Racing LLC. 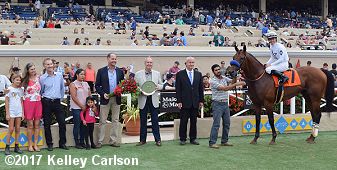 Battle of Midway in the winner's circle. Dan Ward, assistant to trainer Jerry Hollendorfer said, "There was some speed in the race, we've worked him behind horses so he had a target to run at. And with the blinkers he seemed to go on rather than waiting on horses. It doesn't always work out the way you want, but this time it did. I listened to the Jim Rome (owner of Shared Belief) radio show this morning and he talked about the memories. I texted him and told him I was going to wear the (blue and white) colors." Jockey Flavien Prat added, "Much better today. The blinkers had to help. He seemed much more focused. He did just what I asked him to do. He's a good horse. We know that. He ran third in the (Kentucky) Derby. You know he's a good horse."