The feature race at Del Mar on Saturday was the $300,000 Bing Crosby Stakes (G1) for older horses sprinting 6 furlongs on the main track and is a Breeders' Cup Challenge "Win and You're In" qualifier for the Sprint. Conditions were excellent with clear skies and temperatures in the low 70's for the 18,030 in attendance at the seaside oval. Roy H was sent off as the 8-5 favorite in the field of 9 off his win in the True North (G2) at Belmont. In to challenge him included 9-5 second choice Drefong, unraced since winning the Breeders' Cup Sprint (G1) and 9-2 third choice Ransom the Moon, second in the San Carlos (G2) after winning the Kona Gold (G2).

Soon after the start Drefong ducked in, unseating jockey Mike Smith. 11-1 St. Joe Bay and favorite Roy H dueled for the lead exiting the chute and down the backstretch through opening fractions of 22.19 and 45.52 while stalked by 14-1 Moe Candy and Ransom the Moon. Entering the lane, jockey Flavien Prat sent Ransom the Moon to lead through 5/8 in 57.48. Kept to task by Prat, Ransom the Moon held off favorite Roy H by 1 1/2 lengths in 1:09.63 over the fast main track. It was another 1 1/2 lengths back to Moe Candy third. 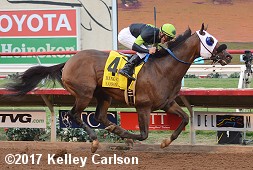 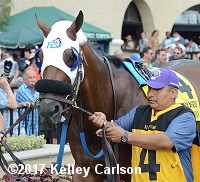 Left: Ransom the Moon in the winner's circle. Winning trainer Phil D'Amato said, "Flavien did a great job feeling out the dynamics of the race and hats off to (Roy H) who ran a really good race. The weird thing is I ran a filly in the fourth race today (Table for Three) who did the same thing Drefong did, she tried to make the gap too. Luckily everyone is all right. We had to kind of sit behind Drefong and we were in the right spot at the top of the lane when he kind of drifted out. This horse is such a big, strong, good-looking Adonis of a horse and since trying him on the dirt he has been a totally different animal. We'll probably prep him on the dirt at Santa Anita and then come back here for the Breeders' Cup."

Right: Ransom the Moon in the paddock. Winning jockey Flavien Prat said, "On the backside I was concerned (about the loose horse, Drefong). I thought he was going to cause me problems. But I stayed behind him and then on the turn, he went outside and took the leader (Roy H) out with him. I got to go inside and it worked out perfectly. My horse is a really nice horse and I think six furlongs is his best distance. I got lucky today. Sometimes racing is like that." Prat has won 3 Bing Crosby's in a row, after Wild Dude in 2015 and Lord Nelson in 2016. 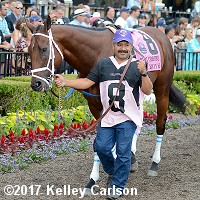 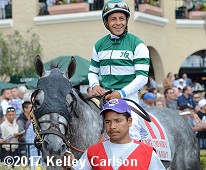 Left: Second place finisher and beaten favorite Roy H in the paddock. Jockey Paco Lopez said, "My horse was running really well and then the loose horse changed everything. I was trying to work around him, but we just kept getting pushed out. I don't know if I would have won if it hadn't happened, but I think I surely could have. Horse racing. What can you do?"

Right: Third place finisher Moe Candy in the paddock. Jockey Victor Espinoza said, "Really good race for him. We get pushed way out in the middle of the track (by the loose horse) and it just happened. There it is. He ran good, though. A very good race for him." 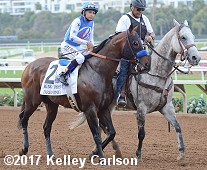 Second choice Drefong, who lost his rider after the start, in the post parade. Jockey Mike Smith said, "I'm fine. It's just too bad it happened. The horse just outside me (St. Joe Bay), just brushed me a little bit and sent (Drefong) left toward the gap. Then he just ducked for (the gap) and I came off. If I don't get brushed, I think I go right through there and I'm going to be fine. But they tell me the horse is OK, and I'm OK. It's just one of those things."