Kentucky Oaks Day on Friday usually draws the second largest attendance of any raceday in North America, second only to the Kentucky Derby run the very next day, and this year was no exception with 100,188 fans packing the stands and infield. Five graded stakes were contested on the Oaks undercard, both over the fast main track (wet-fast for the Oaks) and firm Matt Winn turf course. The weather changed frequently, with fans and participants experiencing sunny skies, dark clouds, heavy rain, and even a lightning storm that prompted weather warnings for fans to take cover, with temperatures near 70. Churchill Downs president Mike Anderson said, "Today we celebrate Secret Oath and her connections. The 148th Kentucky Oaks will be remembered as a triumphant return to a full-capacity crowd. We thank the fans, sponsors, horsemen, horseplayers, and all participants who contributed to today's record-breaking success."

The first Grade 1 stakes of the Churchill Downs meeting is the $750,000 La Troienne Stakes (G1) presented by Signify Health for older fillies and mares going 1 1/16 miles on the main track. Last year's winner and Azeri Stakes (G2) third place finisher Shedaresthedevil was sent off as the 4-5 favorite in the field of 7 over 9-5 second choice Pauline's Pearl, second in the Azeri, and 7-1 third choice Battle Bling, second in the Top Flight Invitational.

Jockey Florent Geroux sent favorite Shedaresthedevil to the lead first time by through fractions of 24.02, 47.80, and 1:11.78 while pressed by 13-1 Ava's Grace and stalked by 18-1 Jilted Bride. Turning for home Shedaresthedevil continued to lead through 1 mile in 1:36.07 but Pauline's Pearl, 4th early under Joel Rosario, came out for room and outfinished Shedaresthedevil to win by 1/2 a length in 1:42.46. It was another 2 3/4 length back to Ava's Grace third. 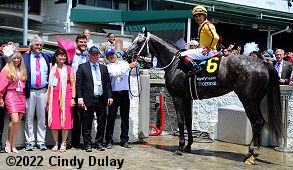 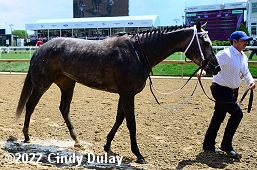 Left: Pauline's Pearl in the winner's circle. Winning jockey Joel Rosario said, “Steve told me to watch her at the gate; that she could break slow. But she came out fine and I got a good position. I got pushed out a bit on the turn (for home), but once we straightened out she leveled off. She ran well through the stretch.”

Right: Pauline's Pearl heads back to the barn. Winning trainer Steve Asmussen said, “So many things go into it. She was a nice filly early that continuously competed and got better. She came back a 4-year-old! All four races this year have been tremendous. It is so satisfying for her to come back and get her first Grade 1 on Oaks Day. She did her best last year in the Oaks. You can see the improvement one year has made in her.” 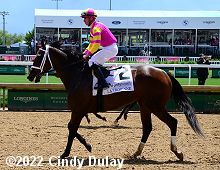 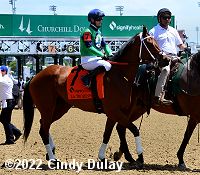 Left: Second place finisher and beaten favorite Shedaresthedevil returns to be unsaddled. Jockey Florent Geroux said, “She ran hard. And she was still running at the end. The winner was best today.”

The $500,000 Alysheba Stakes (G2) presented by Sentient Jet featured 7 older horses going 1 1/16 miles on the main track. New Orleans Classic (G2) winner Olympiad was sent off as the 9-10 favorite over 7-2 second choice Happy Saver, unraced since second in the Clark (G1) in November, and 5-1 third choice Fulsome, winner of the Oaklawn Mile (G3). 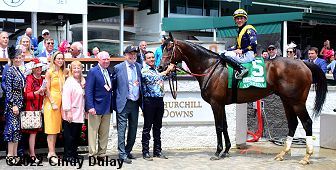 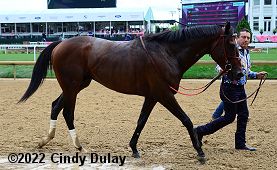 Left: Olympiad in the winner's circle. WInning jockey Junior Alvarado said, “The more ground you give Olympiad the more room he has to open up. It takes him awhile to get into his nice rhythm but then after that it’s over. Happy Saver was trying to do his job, riding tough on me trying not to give me much room for my horse to finish up his run. I knew there was a horse in there but I tried to help a little bit, to keep my momentum going forward, but I like I said I wasn’t doing anything, it was the horse on the outside putting the pressure on me. Worse case I wasn’t getting taken down, it would be the horse on the outside.”

Right: Olympiad heads back to the barn. Winning trainer Bill Mott said, “We thought he was a nice horse since he was a 2-year-old. He missed a lot of time in his 3-year-old year unfortunately. The patience that we were allowed to have with him and waited until he got right paid off. He’s a really good horse and competing at a top level. It looked like Irad (Ortiz, Jr. on Happy Saver) came in and shaved us a little bit, made it a little tight and the rider on the inside had to take up. I was a little concerned about it. I knew it wasn’t us and another horse caused us to put pressure on the inside horse.”

The $500,000 Edgewood Stakes (G2) presented by Forcht Bank featured a field of 10 three-year-old fillies going 1 1/16 miles on the turf. Florida Oaks (G3) winner and Appalachian (G2) runner-up Dolce Zel was sent off as the 2-1 favorite over 9-4 second choice McKulick, unraced since 3rd in the Miss Grillo (G2) in October, and 11-2 third choice Spicer, second in the Florida Oaks. 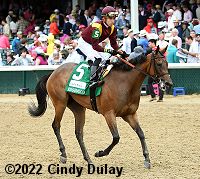 Left: New Year's Eve heads to the winner's circle. Winning trainer Brendan Walsh said, “She’s been just a bit slow mentally. But she’s getting it bit by bit. So we gave her some time to figure things out, then we gave her a push. We put blinkers on her for her last two works and she seemed to pick it up a bit. I was quietly confident that she’d be better today. And she was.” Jockey Luis Saez added, “She relaxed really well. I was able to save ground around the first turn. I came out a little after a half-mile because I saw horses in front stopping. At the top of the stretch, she was in the clear and boom. She was loving it. I could feel how happy she was.”

The $500,000 Eight Belles Stakes (G2) presented by TwinSpires featured a field of 9 three-year-old fillies sprinting 7 furlongs on the main track. Beaumont (G3) winner Matareya was sent off as the even-money choice over 11-2 second choice Marissa's Lady, winner of the Serena's Song, and and 15-2 third choice Pretty Birdie, winner of the Purple Martin.

Jockey Florent Geroux sent Pretty Birdie to the lead exiting the chute through fractions of 22.27 and 44.72 while pressed by Marissa's Lady and stalked by 19-2 Sweet Dani Girl. Turning for home, Matareya, 6th early under Flavien Prat, came out for room to take the lead through 3/4 in 1:09.16. Kept to task by Prat, Matareya drew off to win by 2 1/4 lengths over Pretty Birdie in 1:21.86. It was another 2 lengths back to 13-1 Wicked Halo third. 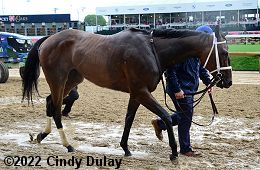 Left: Matareya in the winner's circle. Winning jockey Flavien Prat said, “She broke well but I just got outrun in the first part. Then I took a chance going to the inside where there were good horses to follow. Then we had a fair pace, was traveling well and when I tipped her out, she was there for me. I thought it was a really good run for her.”

Right: Matareya heads back to the barn. Winning jockey Brad Cox said, “She stepped up and ran a huge race. I’m very proud of her. It was heads-up riding by Flavien (to quickly get to the inside). They kind of started to get away from her the first 1/8 mile, 3/16 mile. We thought she might be a little closer to the pace. But he didn’t panic, he let her kind of find her stride, save some ground in the turn, tipped out, and defeated a very good filly (Pretty Birdie). He put himself in a good position down the backside, so she didn’t have to do too much work heading for home.”

Immediately before the Oaks, the $500,000 Twin Spires Turf Sprint (G2) presented by Sysco featured a field of 13 older horses sprinting 5 1/2 furlongs on the Matt Winn Turf Course. Silks Run Stakes third place finisher Arrest Me Red was sent off as the 5-2 favorite over 3-1 second choice Caravel, last of 12 in the Breeders' Cup Turf Sprint (G1), and 15-2 third choice Just Might, 6th in the Shakertown (G2).

Just Might and 22-1 Johnny Unleashed dueled for the lead down the back and around the turn through fractions of 22.86 and 46.36 while stalked by Arrest Me Red and 16-1 The Lir Jet. In the lane the pacesetters tired as Arrest Me Red inherited the lead through 5f in 58.03. Kept to task by Irad Ortiz Jr., Arrest Me Red drew off to win by 1 3/4 lengths over late-running 40-1 longest shot Bran in 1:04.18. It was a nose back to 10-1 Gregorian Chant third.
Results chart from DRF 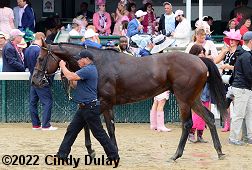 Left: Arrest Me Red in the winner's circle. Winning jockey Irad Ortiz Jr. said, “I know my horse, he doesn’t want to be on the lead. It was gonna be a fast pace, and he put me in a great position without using too much, so I was happy where I was. I rode him last time 5 1/2 furlongs at Gulfstream and he ran well. He needed the race maybe. I work him in the mornings and I was very positive coming into the race.”

Right: Arrest Me Red heads back to the barn after the race. Winning trainer Wesley Ward said, “He broke really well. You never know how it’s going to go on the soft turf when they’re up there on the pace. They were pressuring Irad (Ortiz Jr.) from the outside and he told me he decided to take back a little. He got a little breather. They were a little wide coming around the turn, but when they got to the quarter pole I could see he still had quite a bit of horse. I was crossing my fingers down the lane that no one was coming. We got lucky and won. He ran huge. I’m grateful to the (owners) Jacksons (Lael Stable) for sending him to me.”

Kicking off the Oaks day stakes action, the $250,000 Modesty Stakes (G3) presented by TwinSpires featured a field of 9 older fillies and mares going 1 1/8 miles on the Matt Winn Turf Course. Undefeated winner of the Hillsborough Stakes (G2) Bleecker Street was sent off as the even-money choice over 5-2 second choice Fluffy Socks, third in the American Oaks (G1) then a close second in a Keeneland allowance, and 15-2 third choice Hendy Woods, 6th in the Tom Benson Memorial.

Jockey Tyler Gaffalione sent 27-1 Mona Stella to the lead first time by through fractions of 25.18, 50.31, and 1:14.55 while pressed by 17-2 Curly Ruth and stalked by 11-1 She Can't Sing. In the stretch Mona Stella tired allowing Curly Ruth to briefly lead through 1 mile in 1:38.44 before also tiring. Favorite Bleecker Street, 8th early under Flavien Prat, came out 6 wide for room and came through between horses to outfinish Fluffy Socks by 1/2 a length in 1:50.10. It was another 1/2 length back to Hendy Woods third.
Results chart from DRF 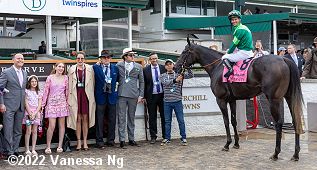 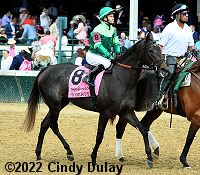 Left: Bleecker Street in the winner's circle. Winning trainer Chad Brown who trains the first two said, “With both my horses far back with that pace, I was quite worried. I figured, if the closers are going to come, Bleecker Street is going to come and Fluffy Socks will be following right behind her. Then it’ll come down to a 1-2 race. Bleecker Street ran amazingly well, and you have to remember, Fluffy Socks is back after three weeks’ rest from a wide trip at Keeneland. These horses are pretty close, Bleecker Street had more rest, but an undefeated horse, 6 for 6, she’s hard to fault. So trip dependent, pace dependent, course dependent. So she’s a remarkable talent. Without a doubt, it was her best race yet.”

Right: Bleecker Street in the post parade. Winning jockey Flavien Prat said, “I didn't feel like going around Irad (on Fluffy Socks) I was going to be able to catch him. I felt like my only chance to catch Irad was to split horses and she was there for me. I thought it was a great performance by Bleecker Street to win that race because we went slow early and I was further back than I wanted to be.”