Kentucky Oaks Day on Friday usually draws the second largest attendance of any raceday in North America, second only to the Kentucky Derby run the very next day, however, under this year's unusual circumstances with Derby week moved to September, both days will officially record zero attendance as racing continues to be conducted without spectators, with just essential horsemen, officials, and very limited media allowed to attend. Five graded stakes were contested on the Oaks undercard, both over the fast main track and firm Matt Winn turf course. Conditions were excellent with partly cloudy skies and temperatures in the low 80's.

Immediately before the Kentucky Oaks was the $500,000 La Troienne Stakes (G1) for older fillies and mares going 1 1/16 miles on the main track. Last year's Oaks winner Monomoy Girl was the 2-5 favorite in the field of 8 off her win in the Ruffian (G1), over 11-2 Vexatious, winner of the Personal Ensign (G1), and 6-1 Horologist, winner of the Molly Pitcher (G3).

Jockey Javier Castellano sent 17-1 Lady Kate to the front first time by through fractions of 23.43, 46.26, and 1:10.48 while pressed by 21-1 Risky Mandate and stalked by Monomoy Girl. Entering the stretch jockey Florent Geroux sent Monomoy Girl and she easily took over through 1 mile in 1:35.51. Kept to task by Geroux, Monomoy Girl drew off to win by 1 3/4 lengths over Lady Kate in 1:42.14. It was another 2 3/4 lengths back to Horologist third. 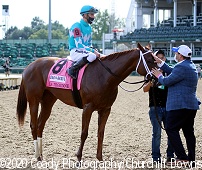 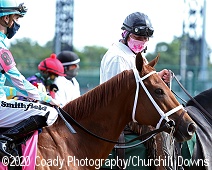 Left: Monomoy Girl returns after the race. Winning jockey Florent Geroux said, "There was no doubt. She gave us every indication in the morning that she was back at a top level. In the Ruffian, when she beat Vexatious pretty easily and then Vexatious came back and beat Midnight Bisou, it gave us a better line from there. Even if it wasn't for that, she's been working extremely well in the morning. There is no doubt she is a champion horse and definitely a horse of a lifetime. "There was a little bit of congestion going into the first turn, but I had a nice outside post. I was never worried. I was on the best horse and we had a great trip. I just had to push the button when she was ready."

Right: Monomoy Girl in the post parade. Winning trainer Brad Cox said, "She's the only horse I get nervous running. Once I leg up Florent it's 10 minutes of anxiety. He did have to work on her a little bit to clear off from Lady Kate. She's a true champion and is able to overcome a four-wide trip into the first turn. She's the horse of a lifetime. The way she's trained since the spring, since April, is when she took off."

Kicking off the stakes action on Oaks Day, the $300,000 Eight Belles Stakes (G2) featured a field of 5 three-year-old fillies sprinting 7 furlongs on the main track. Dogwood (G3) and Beaumont (G3) winner Four Graces was sent off as the 9-10 favorite over even-money second choice Mundaye Call, winner of the Audubon Oaks, and 7-1 third choice Sconsin, 3rd in the Audubon Oaks and 2nd in the Beaumont. Mundaye Call set the pace of 22.11 and 44.14 while pressed by Four Graces and stalked by 23-1 Never Forget. Four Graces took over the lead midstretch through 3/4 in 1:08.52 but Sconsin, last early under James Graham, came out 4 wide for room and rallied by to win by 2 1/4 lengths over Four Graces in 1:21.30. It was another 1 3/4 length back to Never Forget third. 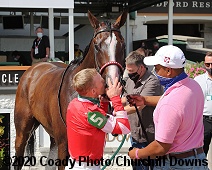 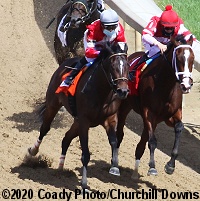 Left: Sconsin in the winner's circle. Winning jockey James Graham said, "She ran huge. She likes this racetrack evidently. They ran fast in front of her and she picked them off. Can't ask for any more than that. The two favorites are speed horses, so all you can hope is that they hook up and kill each other off. My filly was just happier today. Those two had pace pressure and we just finished them off."

Right: Second place finisher and beaten favorite Four Graces on the outside in the final turn. Trainer Ian Wilkes said, " It looked like it was going to be the two of us (favorites) going out front and hope we didn't set it up. But the other filly ran good. I'm proud of my horse, she didn't quit. My filly runs her race. I've got to let her run her race. I freshened her up, I backed off her. I don't want to make excuses today. My filly ran good."

The last race of the card was the $250,000 Twin Spires Turf Sprint (G2) featuring a field of 12 older horses sprinting 5 1/2 furlongs on the Matt Winn Turf Course. Shakertown (G2) 5th place finisher Extravagant Kid was the 2-1 favorite over 4-1 Diamond Oops, 2nd in an allowance after finishing 4th in the Pegasus World Cup (G1), and 5-1 Wellabled, 3rd in the Karl Boyes Stakes. Wellabled was quickest away through fractions of 22.58 and 45.85 while pressed by 9-1 Just Might and stalked by 6-1 Carotari. Just Might took over the lead through 5/8 in 58.00 but Diamond Oops, last early under Florent Geroux, saved ground and came through on the inside to outfinish Extravagant Kid y a neck in 1:04.18. It was a length back to Just Might third.
Results chart from DRF 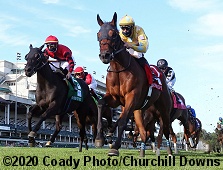 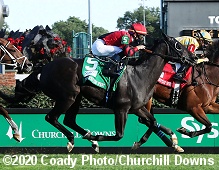 Left: An inside shot of the finish. Winning jockey Florent Geroux said, "He ran big. He's an amazing horse. Patrick (Biancone) always told me this horse has a little bit of some kind of physical problems, but he has the heart of a champion. He'll run on any kind of surface, any distance, from six furlongs to a mile. We saw him last year when he almost pulled it off in the (Grade1) Shadwell Turf Mile. I have no idea what's next for him, because he runs turf, he runs dirt, he does everything."

Right: Second place finisher and beaten favorite Extravagant Kid at the finish. Trainer Brendan Walsh said, "He ran well. Looked like he had the race won. He did that the one time he got beat here at Churchill, he made the front a little too soon. But in fairness to (jockey) Tyler (Gaffalione), he thought he had everybody covered. You can't just sit on him. He had to go with it, and we got caught out. But hat's off to the winner. They won the race. But he showed up again. We can't ask for much more than that. It would have been nice to win, but there you go." 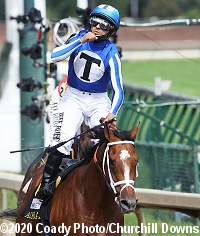 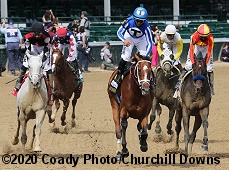 Left: By My Standards after the finish. Winning jockey Gabriel Saez said, "A little bit out of the gate, I see (Manny) Franco trying to get going (on Mr Freeze). I said, 'OK, he's going to go. I'm going to stay in here close. It was not really fast on the front end, but when it was time to get running around the half-mile pole, he picked up an extra gear. Each time I asked him to give me that acceleration, he did. I was really confident in him today. I was expecting him to run a huge race today, and here we are. I'm glad we got the job done. I'm looking forward to the Breeders' Cup. Fingers crossed and hope for the best."

Right: Head on of the finish with beaten favorite McKinzie on the inside. Jockey Mike Smith said, "I was hoping that once he got in the pocket and settled, that once there was a place to go, that he would really turn it on like he did last year. I had the whole length of the stretch to turn it on. I had a big ol' hole down on the inside, and he didn't seem to want to go through it. Last year he would have exploded. He would have cut right through there and won drawing away." 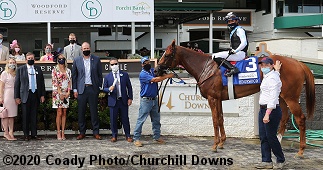 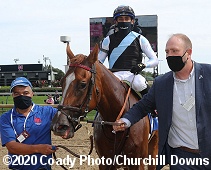 Left: Sharing in the winner's circle. Winning trainer Graham Motion said, "I figured she probably would be (a little fresh). The last thing I said was just tell Manny to keep her settled. She hasn't run for a while so it's not surprising but she's never overly anxious. She's such a pro. The only question I have in my mind is how far she wants to go. She obviously loves this distance. The next race would be 1 1/8 miles if we go to the QE2 at Keeneland. I don't know if she wants to go that far, I don't know why she wouldn't, but she seems awfully good going a mile. I think the QE2 is a race anyone with a good 3-year-old filly wants to go. I'm so tickled to get a race under her now because this makes it easier going forward now we've got this level of fitness."

Right: Sharing heads to the winner's circle. Winning jockey Manny Franco said, "She has tactical speed. She broke out of there good and put me in a position where I wanted to go. After that, she knows how to get it done. She is so nice and has a really good turn of foot. She is very professional."