There were five stakes races run Friday at Churchill Downs on the Kentucky Oaks undercard. Conditions were less than ideal, as heavy rains drenched participants, spectators, and the racing surfaces, causing the tracks to be quickly downgraded from fast and firm at the start of the card to sloppy and yielding, with temperatures in the low 70's most of the day and plenty of wind to add to the fun. Get the Oaks results and photos here.

Kicking off the stakes action on Kentucky Oaks day was the $100,000 Aegon Turf Sprint (G3) for older horses sprinting 5 furlongs on the turf. 9-5 favorite Mr. Nightlinger did not disappoint his many backers, recovering quickly from a bobble at the start and going to the lead immediately, setting fractions of 22.63 and 44.72 while being stalked by 3-1 second choice Indian Ashton. Entering the stretch he pulled ahead to a 1 length advantage as Indian Ashton tired, and he easily held off the on-rushing 9-2 third choice Salute the Count for a 1 length victory in 56.18 over the firm turf course. It was another length back to 7-1 Atticus Kristy in third.
Full results chart from DRF 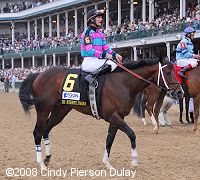 Mr. Nightlinger heads for the winner's circle. Dennis Geier, assistant to winning trainer Bret Calhoun said, "He's (Mr. Nightlinger) done it all. I don't know what to say. The turf might be his calling. We'd been waiting to get him back on it. We tried him (on turf at Keeneland), not thinking he'd win but he really responded. We ran him back a little quicker than we wanted to do today." Jockey Jamie Theriot added, "It's really becoming his style to let him fall out of there. He just places himself and that's where he wants to be. It looks like we have found a niche with him now – he's 2-for-2 going short on the turf."

The $300,000 Louisville Stakes (G2) featured just five older fillies and mares going 1 1/16 miles on the main track. 11-1 longest shot Unforgotten was quickest out of the gate and led after a quarter mile in 25.25, before being headed by 1-2 favorite and Eclipse Award winner Ginger Punch midway down the backstretch. Ginger Punch got the half in a slow 50.23 and 3/4 in 1:14.06, then turned away a brief challenge by 10-1 Leah's Secret at the top of the lane, opening up through the stretch, despite jumping a puddle, to win by 3 3/4 lengths in 1:43.08 over the officially "fast" track as rains fell. It was another 2 1/4 lengths back to 3-1 second choice Lear's Princess third.
Full results chart` 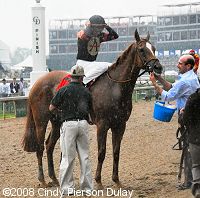 Ginger Punch returns after the race. Winning trainer Bobby Frankel said, "She ran her race. Everything worked out well. I don't know what's next; we'll just have to look." Jockey Rafael Bejarano added, "The first jump out of the gate, she was a little slow. We were supposed to have the lead. She likes to run on the lead. But it was OK and at the five-eighths I started to let her go and then just waited for her big run. Down the stretch, she saw water on the track and jumped, I imagine to protect herself. She was just reacting to the moment. She was OK."

The $150,000 Edgewood Stakes featured 8 three-year-old fillies going 1 1/16 miles on the turf. Soon after the start, 3-1 second choice Zee Zee sprinted away to a clear lead and set fractions of 24.57, 49.89, and 1:14.59 over the turf course downgraded to "good" as rain continued to fall. Entering the stretch, jockey Kent Desormeaux asked her for run and got it as she opened up a 3 length lead at the 1/8 pole. 4-1 third choice My Baby Baby put in a strong rally from sixth but was left with too much ground to make up, as Zee Zee cruised under the line 1 3/4 lengths clear in 1:44.73. It was a long 3 lengths back to 19-1 longest shot Magger Bags, while 5-2 favorite Grace and Power was fourth.
Full results chart 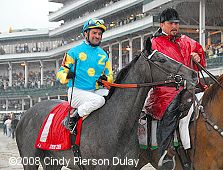 Jockey Kent Desormeaux is all smiles as Zee Zee returns after the race. Desormeaux said, "It was an astute call by the trainer and the owner. They thought it was a paceless race and told me not to give up what might come easy, meaning the lead. She took it very easily; she was in control and very attentive to my needs during the entire running, especially when I called on her." Winning trainer Bill Mott said, "She's one of the barn favorites, so her winning is extra-sweet to everyone today. She's a very nice filly. We thought we might wind up on the front end and we did. She bounced along there nicely and Kent looked in control the whole way."

The $150,000 Alysheba Stakes (G3) included seven older horses going 1 1/16 miles on the main track, now rated sloppy and sealed. 11-1 shot Better Than Bonds battled on the pace with 9-5 favorite Wanderin Boy through fractions of 23.56, 47.41, and 1:11.97. Entering the stretch, 5-1 Giant Gizmo, who rated back in fifth early, came out six wide into the lane and closed with a rush, taking over the lead at the 3/16 pole and drew off late to win by 3 3/4 lengths in 1:43.96. It was just a neck between Better Than Bonds and Wanderin Boy. 2-1 second choice Chelokee broke down at the top of the stretch, throwing jockey Ramon Dominguez onto the track. Chelokee was vanned off and immediately transported to Rood and Riddle in Lexington. Dominguez was examined and released to ride.
Full results chart 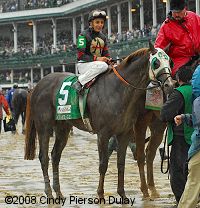 Giant Gizmo returns after the race. Winning trainer Bobby Frankel said, "Well, he likes the slop!" Jockey Rafael Bejarano added, "He broke a little slow so I just took him inside and tried to get him relaxed. He didn't like getting mud in the face, so around the 3/8 pole I put him on the outside and he made a little move on the turn and he started running really good." 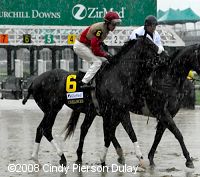 The ill-fated Chelokee who broke down as they turned into the stretch in the post parade. As you can see, it was pouring rain at the time. The next day, Bramlage said at a press conference, "He had a dislocated ankle where he dislocated the sesamoids about five centimeters up the side of the leg, and that´s what the ambulance (personnel) thought initially was a condylar fracture. I´ll look at him again (Sunday) morning. He lost some of the blood supply to his foot, the rest of it is coming back. We have to follow it along until it´s appropriate to make an incision in the soft tissue that he injured. He had quite a lot of swelling and a lot of soft tissue damage. It´s a career-ending injury. Hopefully, with a little luck, he´ll be able to be a stallion."

The $150,000 Crown Royal American Turf (G3) featured nine 3-year-olds going 1 1/16 miles on the turf. 21-1 Tizdejavu was quickest away and moved down toward the hedge to save ground while setting an easy pace of 24.69, 49.15, and 1:13.96 over the yielding course. 7-1 Halo Najib and 5-1 Nistle's Crunch stayed about a length behind the pacesetter. Entering the stretch, Garrett Gomez asked for run and Tizdejavu opened up a 2 length lead at the 1/8 pole. 5-2 favorite Sailor's Cap, who raced in fifth down the backstretch, came out three wide into the lane and put in a strong rally but just came up short, as Tizdejavu held him off by a neck in 1:46.14. It was another 1 1/4 lengths back to Nistle's Crunch third.
Full results chart 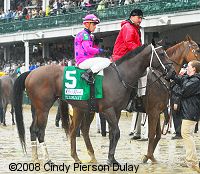 Tizdejavu returns after the race. Winning trainer Greg Fox said, "Today was big. Not only the grass, but a very soft turf, a tremendous field. He really stepped up today." Jockey Garrett Gomez added, "I was just trying to get him away and hoping he'd get a hold of it early on enough where I'd be able to make the lead, set the bit up in his mouth, and get him in a nice flowing stride and that's what I was able to do."