2013 Oaklawn Racing Festival of the South

On closing day of the Oaklawn meet, there are two graded stakes for the older horses. The $500,000 Oaklawn Handicap (G2) featured a field of 10 going 1 1/8 miles on the main track, with Breeders' Cup Classic (G1) winner Fort Larned sent off as the 1-2 favorite, after losing his jockey at the start of the Gulfstream Park Handicap (G2) last out. In to challenge him included 6-1 second choice Cyber Secret, winner of the Razorback Handicap (G3), and 8-1 third choice Atigun, third in his last 3 starts, the Breeders' Cup Marathon (G2), an allowance at Oaklawn, and the Razorback.

Also check out Overanalyze winning the Arkansas Derby and On Fire Baby winning the Apple Blossom during the Racing Festival of the South at Oaklawn. 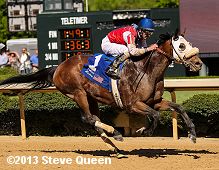 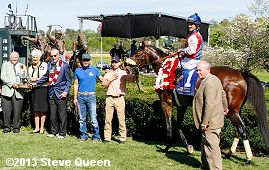 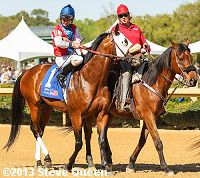 Left: Cyber Secret in the winner's circle. Winning owner (and track owner) Charles Cella said, "Certainly it's one of the top wins that I've ever had. We're talking about racing that goes back in my life for about 55 years, so, that speaks for itself. It's a great, great thrill." Trainer Lynn Whiting said, "I knew he was sitting on a big race. I couldn't be any happier with him. He's just done everything right this whole meet. I'm thrilled for Mr. Cella. The Razorback was his first graded win at his home track. Now, he's won his second." He will start next in the Alysheba Stakes at Churchill Downs.

Right: Cyber Secret in the post parade. Jockey Robby Albarado said, "I thought he ran great today. They were clipping right along up front, but at every part of the race I felt like he was in my hands. He wanted to do it. Turning for home, he exploded for me and then held off some very nice horses." 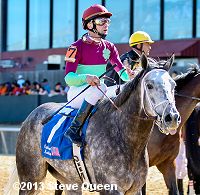 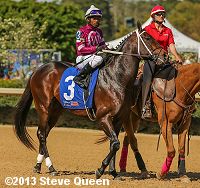 Left: Second place finisher Taptowne returns after the race. Jockey Calvin Borel said, "He was galloping along. I think he ran the race of his life today. He ran big." 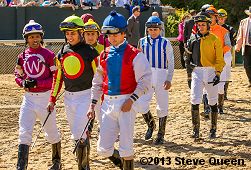 Right: The horses break from the gate for the Oaklawn Handicap.

Immediately after the Oaklawn Handicap was the $250,000 Count Fleet Sprint Handicap (G3) for older horses sprinting 6 furlongs. Justin Phillip was sent off as the 6-5 favorite in the field of 8 off his allowance win after finishing third in the San Carlos (G2). In to challenge him included 3-1 second choice Laurie's Rocket, winner of the Hot Springs Stakes, and 9-2 third choice Gentlemen's Bet, undefeated in three starts and making his stakes debut. 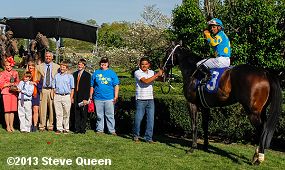 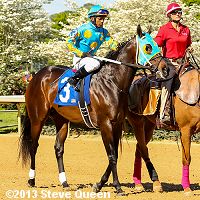 Left: Justin Phillip in the winner's circle. Trainer Steve Asmussen, wrapping up his third consecutive Oaklawn training title, said, "The key was getting this horse the win last time. He walked over like a winner today. It's been a great meet."

Right: Justin Phillip in the post parade. Jockey Ricardo Santana Jr., who took the riding title for the meet, said, "This is a thrill. This is the biggest win of my career. I'm so happy Steve had the confidence in me." 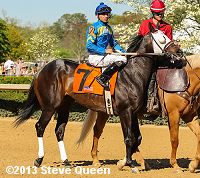 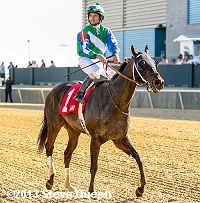 Left: Second place finisher Picko's Pride in the post parade. The 25-1 shot contested the pace under jockey Victor Lebron but could not hold off the winner. The McLean Robertson trainee improved his record to 6 wins, 5 seconds, and 0 thirds in 16 starts, earning $258,015 for owners Barry and Joni Butzow.