The highlight race of the Oaklawn Park spring meeting is the $1 million Arkansas Derby (G1), run at 1 1/8 miles on closing day and worth 100 points for the Road to the Kentucky Derby qualifying system. The crowd of 66,158 enjoyed sunny skies and temperatures in the high 70's. War Academy was sent off as the 9-5 favorite in the field of 10, an allowance winner at Santa Anita last out after finishing fourth in the San Vicente (G2). In to challenge him included 3-1 second choice Oxbow, winner of the Lecomte (G3) but fourth in the Risen Star (G2) and second in the Rebel (G2), and 7-2 third choice Overanalyze, fifth in the Gotham (G3) after winning the Remsen (G2).

9-1 Falling Sky and 62-1 Divine Ambition battled for the early lead through opening fractions of 23.32, 47.64, and 1:12.57 over the fast track, while stalked by 83-1 longest shot Heaven's Runway. Entering the stretch, Falling Sky continued to lead, getting the mile in 1:39.22, but tired through the final furlong. Overanalyze, 7th early, raced wide the whole way to pass tiring horses, gaining the lead inside the 1/8 pole and drawing off to win by 4 1/4 lengths over 24-1 Frac Daddy in 1:51.94. It was just 1/2 a length back to 22-1 Carve third, while pacesetter Falling Sky was a neck back in fourth. Favorite War Academy broke stride after half a mile and was pulled up on the backstretch by jockey Mike Smith. Phil Bauer, assistant to trainer Ken McPeek of Frac Daddy claimed foul against Overanalyze for interference but the claim was disallowed.

Also check out On Fire Baby winning the Apple Blossom and Cyber Secret winning the Oaklawn Handicap during the Racing Festival of the South at Oaklawn. 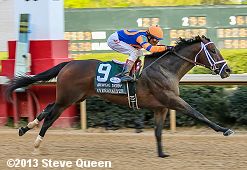 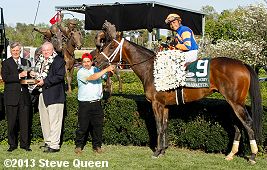 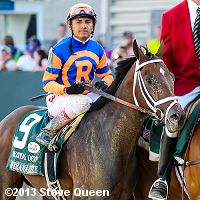 Left: Overanalyze in the winner's circle with Arkansas governor Mike Beebe presenting the trophy on the far left with owner Mike Repole's racing manager Jim Martin on the right. Repole said by phone, "When Johnny (Velazquez) got off him after the Gotham he said he flattened out probably needed the race. Todd was going to run Verrazano in the Wood, so we decided to split the two horses up and come here. I wasn't surprised that he won, but I was shocked at how easy he won. I'm really blessed to have a filly (Unlimited Budget) for the Oaks and now a colt for the Derby."

Right: Overanalyze returns after the race. 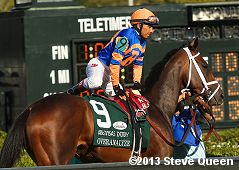 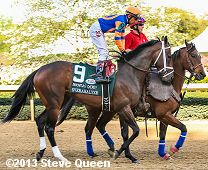 Left: Overanalyze in the walking ring. Jockey Rafael Bejarano said, "This is my Derby horse, I'm pretty sure. Thanks to Mr. Pletcher for giving me the opportunity to ride him today. My horse broke really good. I placed him right behind the early speed because I didn't want to rush him. At the half-mile pole, He started to chase the horses on the lead and he kicked clear. I had a beautiful trip. Once we got to the stretch, I felt like I had a lot of horse left and saved something for the next race." 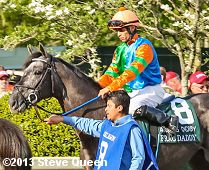 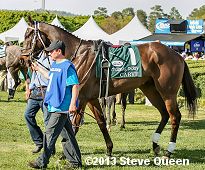 Left: Second place finisher Frac Daddy heads out for the post parade. Phil Bauer, assistant to trainer Ken McPeek said of the foul claim, "We were in a full drive and (Overanalyze) eased over on us. (Jockey Victor Lebron) had to stop riding for a few seconds. It really did affect the margin of victory so I took a shot in the dark." McPeek said by phone from Keeneland (where he won the Blue Grass with Java's War), "My horse ran great and he punched his ticket to the Derby. In the past he's shown a lot of talent and today he put it together. Victor did a very good job riding him. He let him settle and then kept him in the clear."

Right: Third place finisher Carve in the walking ring. His jockey Ricardo Santana Jr. said, "I had the perfect trip. I just wish I hadn't been in the one hole." 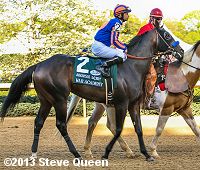 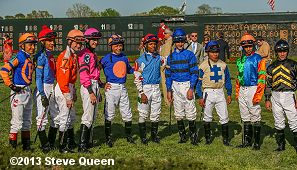 Left: Beaten favorite War Academy in the post parade. He did not finish and was pulled up halfway through the race. Jockey Mike Smith said, "He was just very uncertain over the surface and I tried to get him to settle. He was OK the first turn, but then he took 4 or 5 really awkward steps. I didn't see anything major causing it, but I just felt really awkward on him and figured better safe than sorry so I pulled him up. I didn't want to take any chances."

Right: The jockeys for the Arkansas Derby pose in the infield walking ring before the race. 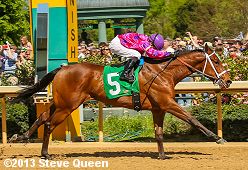 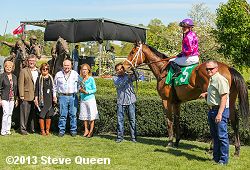 The $100,000 Northern Spur Stakes featured a field of 10 three-year-olds going 1 mile. Looking Cool was sent off as the 8-5 favorite over 5-1 second choice Malibu High and 7-1 third choice Get Happy Mister.

Winning trainer Kelly Von Hemel said, "He ran a huge race. That was our plan going in to get to the lead and set nice, easy fractions. He's a big, long striding colt and we wanted to run him at the mile because we felt all along that was his best distance. He's been training great since his last race and this is what we expected." 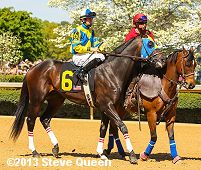 Second place finisher and beaten favorite Looking Cool in the post parade. The 8-5 favorite raced 5th early 4 lengths off the pace under jockey Brian Hernandez Jr., then rallied to get second beaten 2 1/4 lengths. The Carl Nafzger trainee improved his record to 2 wins, 2 seconds, and 0 thirds in 8 starts, earning $86,746 for owner-breeder Jim Tafel.